“Do Not Enter:” Using OSINT to Monitor Russia’s Wargames in the Black Sea

HARM
Comments Off on “Do Not Enter:” Using OSINT to Monitor Russia’s Wargames in the Black Sea

Russia has concentrated warships from all fleets, except the Pacific fleet, in the Black Sea for joint drills. While not unprecedented, it is rare to see such a show of force.

The cross-theater deployments and large-scale exercises bear the hallmarks of a maritime build-up intended to intimidate Ukraine and deter NATO activities in the Black Sea.

This report showcases the Russian assets and maneuvers and analyzes how these actions are shaping the Black Sea theater of operations.

Russia’s maritime build-up in the Black Sea has two aims:

Russian naval task forces from the Caspian, Baltic and Northern Fleets have joined the Black Sea Fleet for exercises near Crimea.

Caspian Flotilla: Around 15 vessels of the Capsian Flotilla, namely gunboats and landing crafts, entered the Black Sea on 16 April.

The deployment was announced on 8 April but in a smaller number. The ships set sail on 11 April, with social media photos documenting their passage through the Don-Volga channel. Footage dated 16 and 17 April shows some of the Caspian task force vessels transiting the Kerch Strait that links the Sea of Azov with the Black Sea. 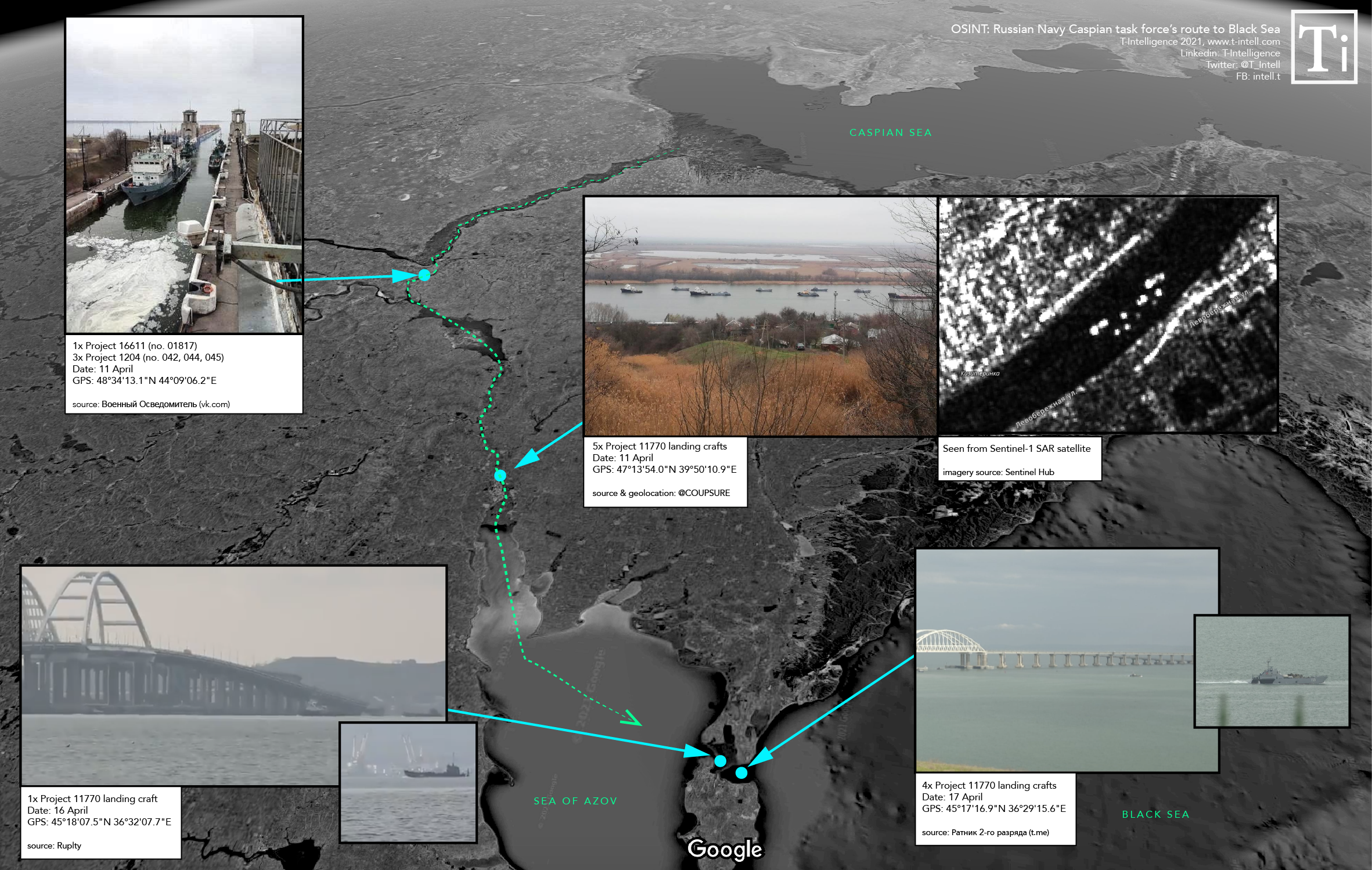 Baltic and Northern Fleets: Both fleets deployed Project 775, or Ropucha-class, landing ships to the Black Sea. Capable of carrying over 450 tones of hardware, primarily tanks or other vehicles, the Ropucha was purpose-built for beach landings. As a versatile hauling platform, the Ropucha has been Russia’s maritime logistical workhorse to deploy and support forces in Syria.

Shispotters documented their northbound pass through the Bosphorus strait on 17 April.

The maritime build-up augments Russia’s land maneuvers near Ukraine’s border that have been ongoing for the past month.

In addition to land and naval movements, Russia has also redeployed over 50 aircraft to Crimea. Ukraine estimates that Russia is now garrisoning nearly 110,000 troops near the Ukrainian border.

Russian forces in Crimea will hold a myriad of land, air, and naval exercises until 1 May. Some are already underway, while others will commence this week.

The Russian drills have so far simulated the defense of Crimea and amphibious assaults of the enemy littoral – undoubtedly a message to Ukraine. Exercises involving marine and amphibious assaults are expected to continue. For example, in the next stage of a multi-phase campaign, Russian marines “will deliver artillery fire against a notional enemy’s coastal targets that will precede a seaborne assault on the shore.”

The satellite imagery below likely shows a Russian naval formation conducting a military exercise off the Crimean coast and near the Kerch Strait. Dated 19 April, the imagery was captured by the Sentinel-1’s synthetic aperture radar, a sensor that allows us to see through cloud cover.  The exercise area is covered by a notice to mariners (NOMAR) that Russia issued a few days ago. 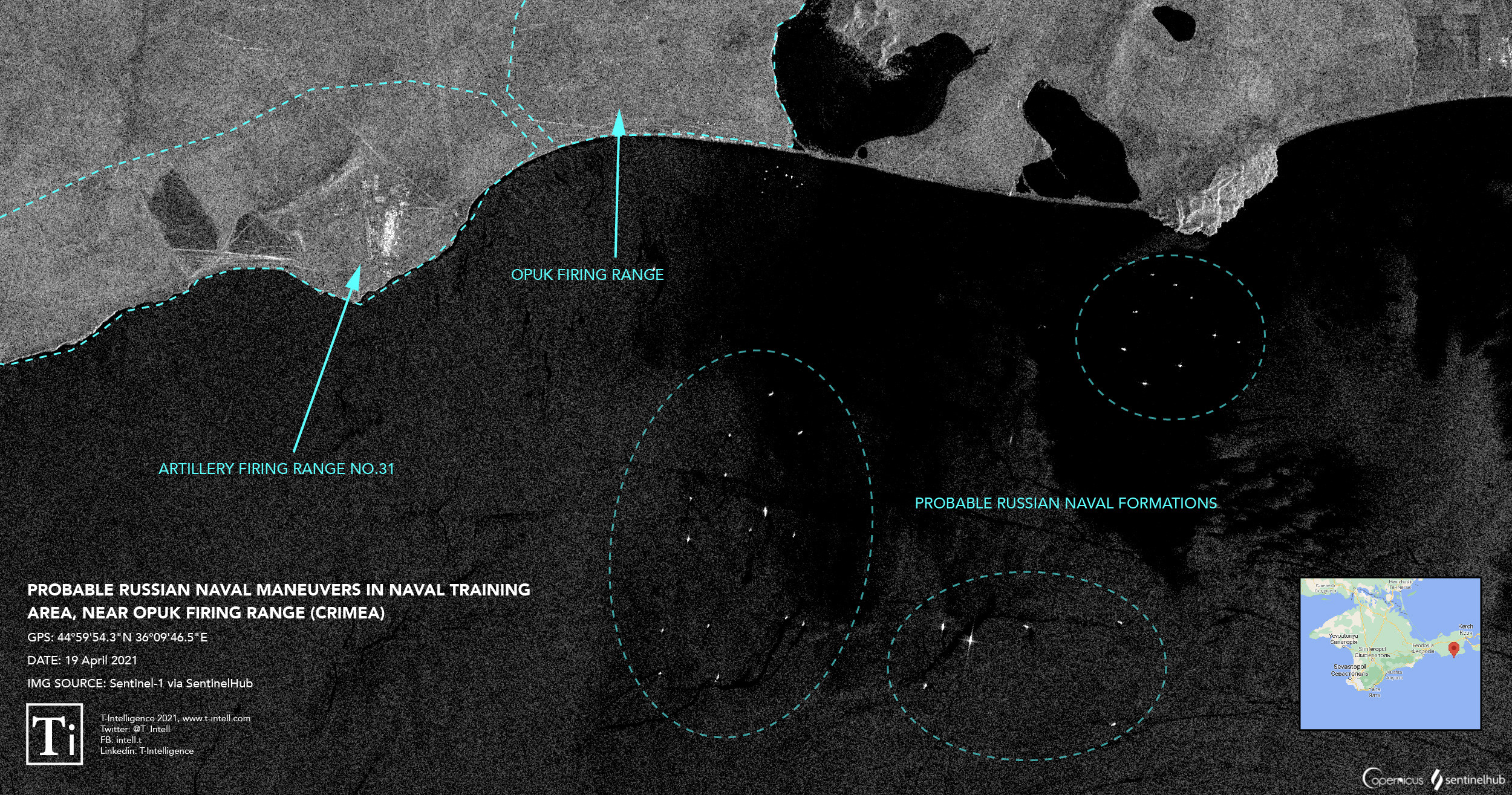 The timelapse below shows the build-up of military hardware and logistics at the Opuk firing range. High-resolution imagery obtained by Der Spiegel provides a closer look at the staging ground.

Update: Monitoring the waters off Opuk, we have observed another spike in maritime activity on 21 April. The SAR imagery shows new Russian naval manoeuvres that are consistent with a coastal assault. With the exception of one search and rescue vessel (MMSI: 273145123), none of the ships were broadcasting AIS. No activity has been noticed on the previous day (April 20). 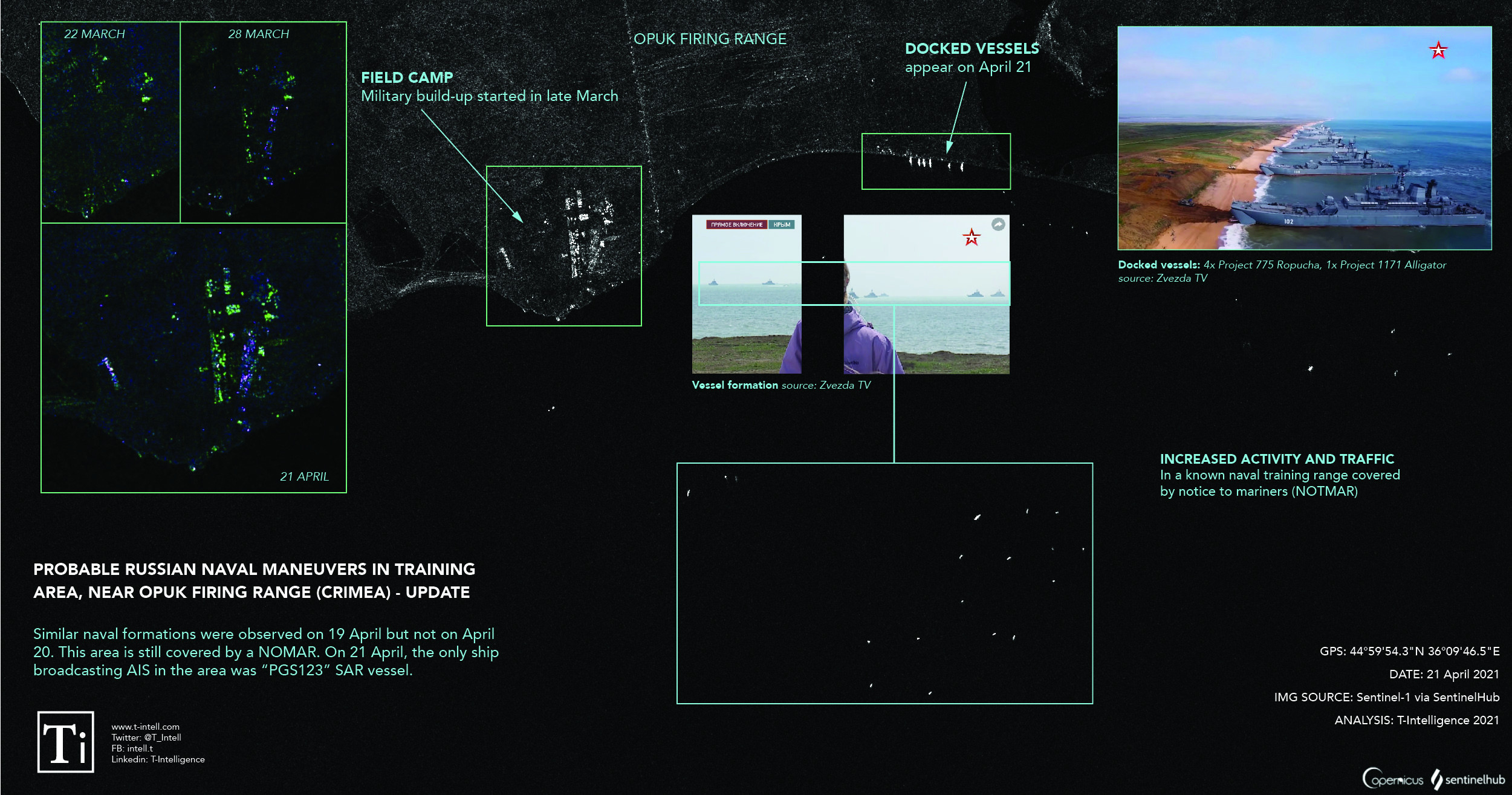 Using visual evidence published by Zvezda TV on 22 April, we were able to confirm that these vessels and movements are connected to Russia’s exercises.

As it is standard procedure, Russia issued a series of notice to airmen (NOTAMs) and notice to mariners (NOMARs) ahead of its exercises, informing seafears and pilots of which areas they should avoid. 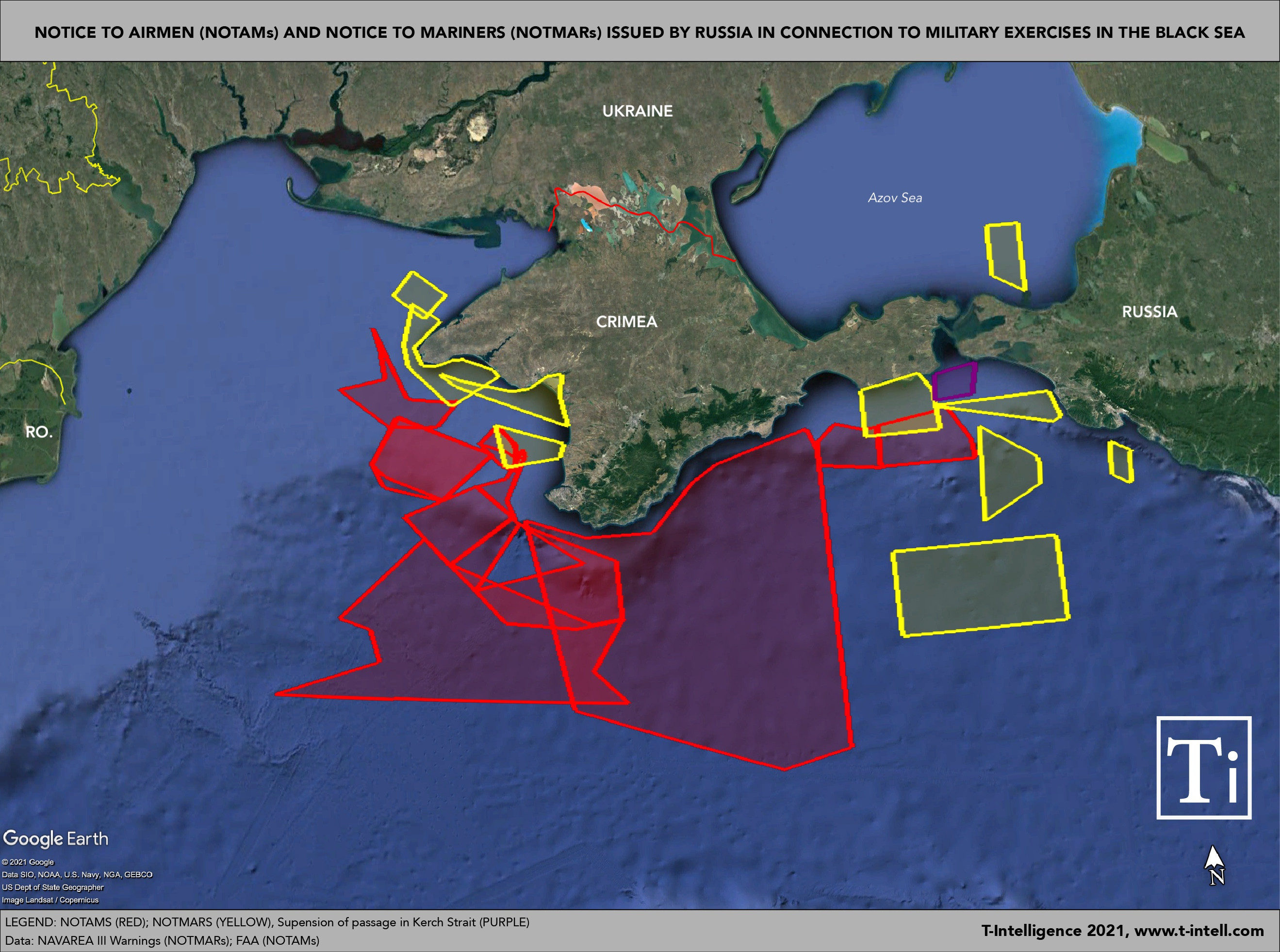 Most “danger areas” are in effect until the end of April. However, in the Kerch strait, Russia plans to suspend the right of passage of foreign warships and “other state ships” until 31 October (purple rectangle). Russia’s state agency later claimed that “the planned restrictions will not affect navigation in the Kerch Strait or its entry points.”

Russia’s temporary air-naval restrictions will have severe ramifications for maritime traffic to and from the Ukrainian port cities in the Azov sea, such as the strategic city of Mariupol. Russia’s de facto blockade of the Kerch strait will also prevent the Ukrainian navy, primarily based in Odessa, from reaching Mariupol in the event of a crisis.

In addition, Russia aims to deter NATO countries from even considering a “freedom of navigation” operation through the strait or a port visit on Ukrainian coast in the sea of Azov. However, the alliance has never suggested that it is considering such missions.

Another key effect of Russia’s excessively large NOTAMs and NOMARs is that it could deter or significantly limit NATO’s ISR (Intelligence, Surveillance, and Reconnaissance) missions on Russia’s exercises.

FORTE10 and P-8A Poseidon are doing their daily runs. Russian NOTAMs will probably complicate or even deny ISR sorties in some areas as RU naval drills are expected to grow. pic.twitter.com/XfJC2l4MEm

Given the latest NOTAMs, NATO surveillance platforms could be targeted by Russian anti-air fire or electronic attacks. From a legal standpoint, Russia has no authority to restrict the regional airspace, as Crimea is still internationally recognized as Ukrainian territory and falls under the Kiyv flight information region (FIR). However, the Russian build-up displays a credible capability and threat. It remains to be seen if NATO ISR missions will continue, and if so, how.

The movement of extra-regional NATO vessels will also be indicative of whether Russia’s muscle-flexing and deterrence work. Two U.S. warships are currently on station in the Aegean Sea after President Biden abandoned plans to sail into the Black Sea, fearing that this move would provoke Russia.

Despite Washington’s reluctance, London has instructed two Royal Navy warships, one Type 45 destroyer and one Type 23 anti-submarine frigate, to deploy to the Black Sea. It remains to be seen if London will go through with the plan in May and if the U.S. warships will continue to idle in Greek waters.

One thing is certain, regional NATO countries and Ukraine would breathe easier knowing that advance British and American destroyers are in the Black Sea just in case Russia’s wargames turn out to be something else.

Update 22 April – additional comments have been added on the paragraph about NOTAMs and NOMARs to clarify Russia’s perspective on its plans to limit navigation through the Kerch strait.