During a raid in the night of January 20th 2019, the Israeli Air Force (IAF) prosecuted Iranian and Syrian ground targets in southern Syria. The operation included both ground attack and suppression/destruction of enemy air defenses (S/DEAD).

1. A video released by the Israeli Defense Forces (IDF) shows two SAM systems destroyed by Israeli missiles. The first one, either a 9K33 Osa (NATO reporting name: SA-8) or a 96K6 Pantsir S-1 (SA-22), was overwhelmed by an IAF saturation strike. The SAM system, based 5 km south of Damascus International Airport, fired for effect, but missed the interception. The SAMs detonated in mid air. The site coordinates are 33°20’54.4″N 36°28’08.1″E

3. We assess that the Pantsir (SA-22) was active and engaged in air defense. After consuming the munnition and receiving homing alerts, the crew deactivated the system’s antenna and fled. The crew was not caught off guard due to lack of personnel or low readiness, contrary to what some observers suggests.

4. Due to its location, the Pantsir (SA-22) was one of the most tactically important point air defense (PAD) systems in southern Syria. The system provided PAD for local long-range systems such as the S-200 (SA-5) and covered Damascus International Airport, which has been a bi-monthly, if not weekly, target of the IAF. If any crew was kept on high readiness, it was this Pantsir (SA-22) crew. The site coordinates are 33°22’56.5″N 36°29’38.4″E

Battle Damage Assessment via @sentinel_hub of the #SyAAF‘s Pantsir S-1/ SA-22 prosecuted by the @IAFsite on January 20, 2019.

5. As the IAF targeted the system, the Pantsir’s counter-D/SEAD protocol kicked-in and alerted the crew that enemy anti-radiation missiles (ARMs) were homing on its sensor emission. In such situations, the crew needs to deactivate the radar (flip the antenna off) and go mobile, leaving the position acquired by the enemy ARM. The crew indeed turned the radar off, but then – most likely – panicked and abandoned the Pantsir, leaving the door wide open/ the generator running.

6. The supply vehicle spotted in the footage suggests that the Pantsir was about to be re-armed. The 2F77M is the designated transporter/transloader for the Pantsir (SA-22) and Tunguska (SA-19) SAM system family. The transloader is a 6×6 KamAZ-43101B truck. 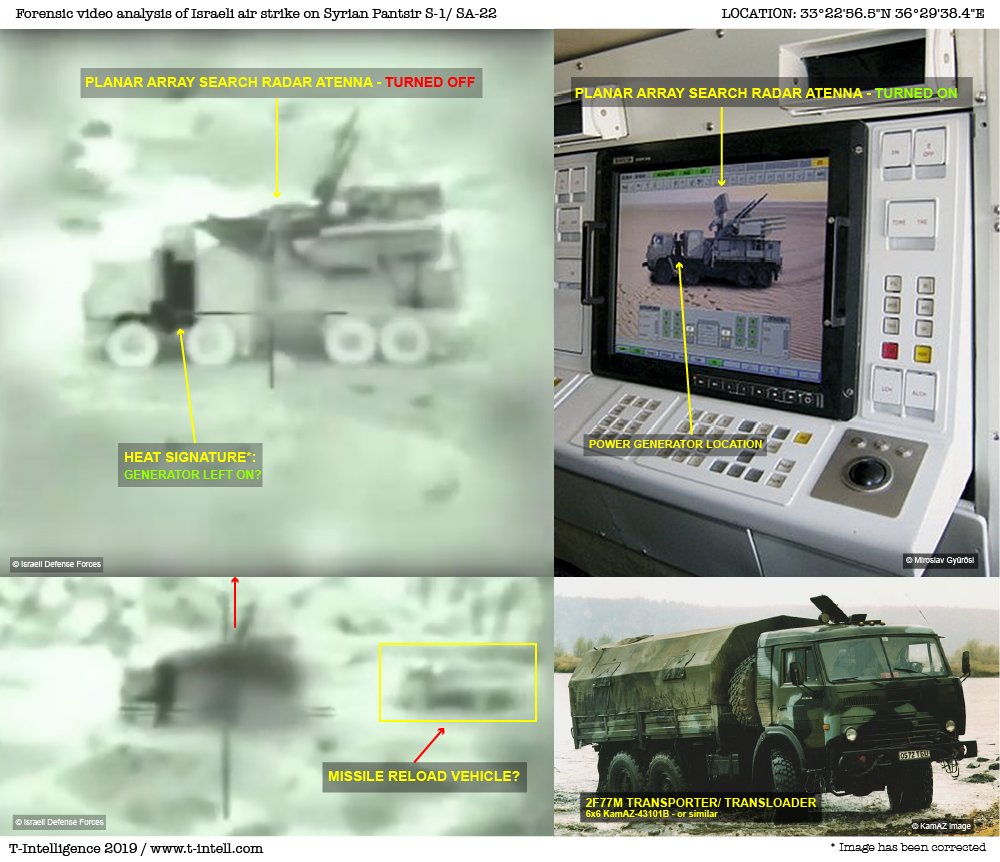 7. The Syrian Pantsir (SA-22) air defense systems were likely targeted by the Israeli-made IAI Harop loitering ammunition, a low-observable (LO) anti-radiation “suicide” drone. The drone is designed to bypass enemy radars and loiter around the battlefield to find and engage evasive SAMs. For guidance, the drone can autonomously home on the enemy’s radar emission or be remote-controlled by a human operator (human-in-the-loop mode). The IAI Harop does not carry a warhead but self-destructs when reaching the target. This drone was credited for destroying another Syrian Pantsir (SA-22), during Israel’s Operation House of Cards on May 10, 2018. 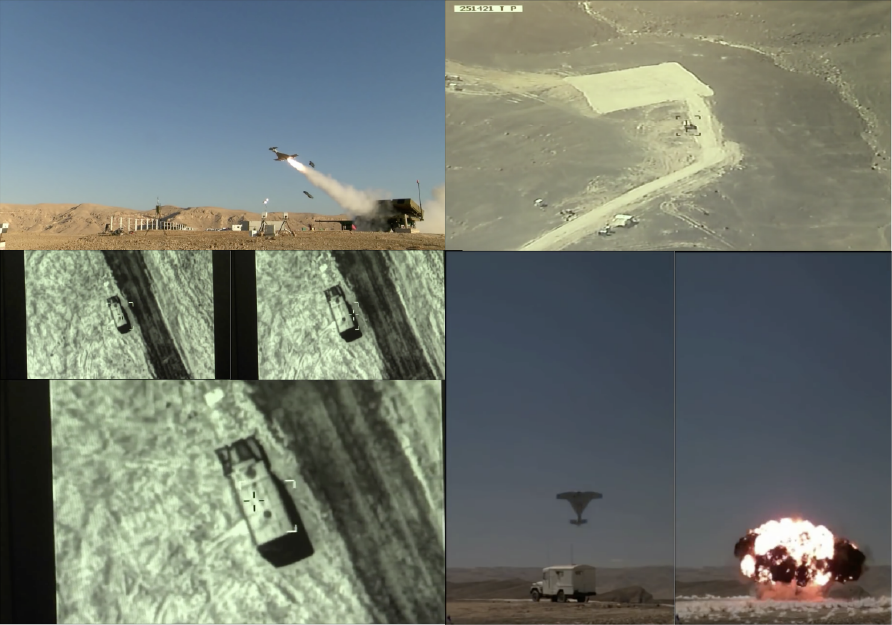 8. During the current raid, the IAF also destroyed a 3D long-range JY-27 early warning radar near Damascus International Airport. The JY-27 “Wide Mat” works at a very-high frequency (VHF) and can theoretically detect LO and very LO aircraft. The system is heavily inspired by Russia’s own VHF-band counter-LO aircraft radar, the “Box Spring” (1L13 Nebo SV and 1L119 Nebo SVU). The site was a key component of Syria’s evolving air defense network. With the JY-27 destroyed, the IAF mitigates the risk of having its F-35I Adir LO RCS detected.

9. The SADF has visibilly improved its effectiveness in countering ordinance. This is due to sustained Russian training, through which the Syrian Air Defense Forces (SADF) of the Syrian Arab Air Force (SyAAF) learned how to operate advanced point air defense SAM systems, namely the SA-22 and SA-17.

10. The SADF’s improved capability has a considerable tactical impact, as it forces the IAF to conduct saturation strikes in order to guarantee that the missiles reach their targets. In turn, more aircraft, heavier payloads (leading to an increased radar-cross section) and multiple bombing rounds will be necessary for future raids.

11. The repeated destruction of Syria’s Pantsir S-1 (SA-22) air defense systems will potentially discredit the newest generation of Russian-made systems in the eyes of Middle Eastern customers. The Pantsir S-1 is a highly-mobile low-altitude medium-range self-propelled SAM system. Armed with twelve 57E6 SAMs and a 30mm autocannon, the system was designed to counter precision-guided munition. It is marketed as an effective solution to defend against U.S.-made maneuvering cruise missiles such as the Tomahawk and ARMs (U.S-made AGM-88 HARM or British ALARM), which have historically overwhelmed Soviet-made SAM systems. The latest Israeli raids have however repeatedly overwhelmed and destroyed the system.

CORRECTION: It is likely that the element marked as an open door is the vehicle’s running generator. While this does not dispute the analysis, the content has been edited accordingly