In the past month, Russia has moved over 14,000 soldiers and a vast array of capabilities, including Iskander ballistic missiles,  tanks, howitzers, and thermobaric rocket launchers towards the Ukrainian border. Russia then launched thousands of snap exercises countrywide and established new field camps. One staging ground in Voronezh oblast, hosting over 400 military assets, has all the hallmarks of a logistics node that could support a line of communication into Ukraine. 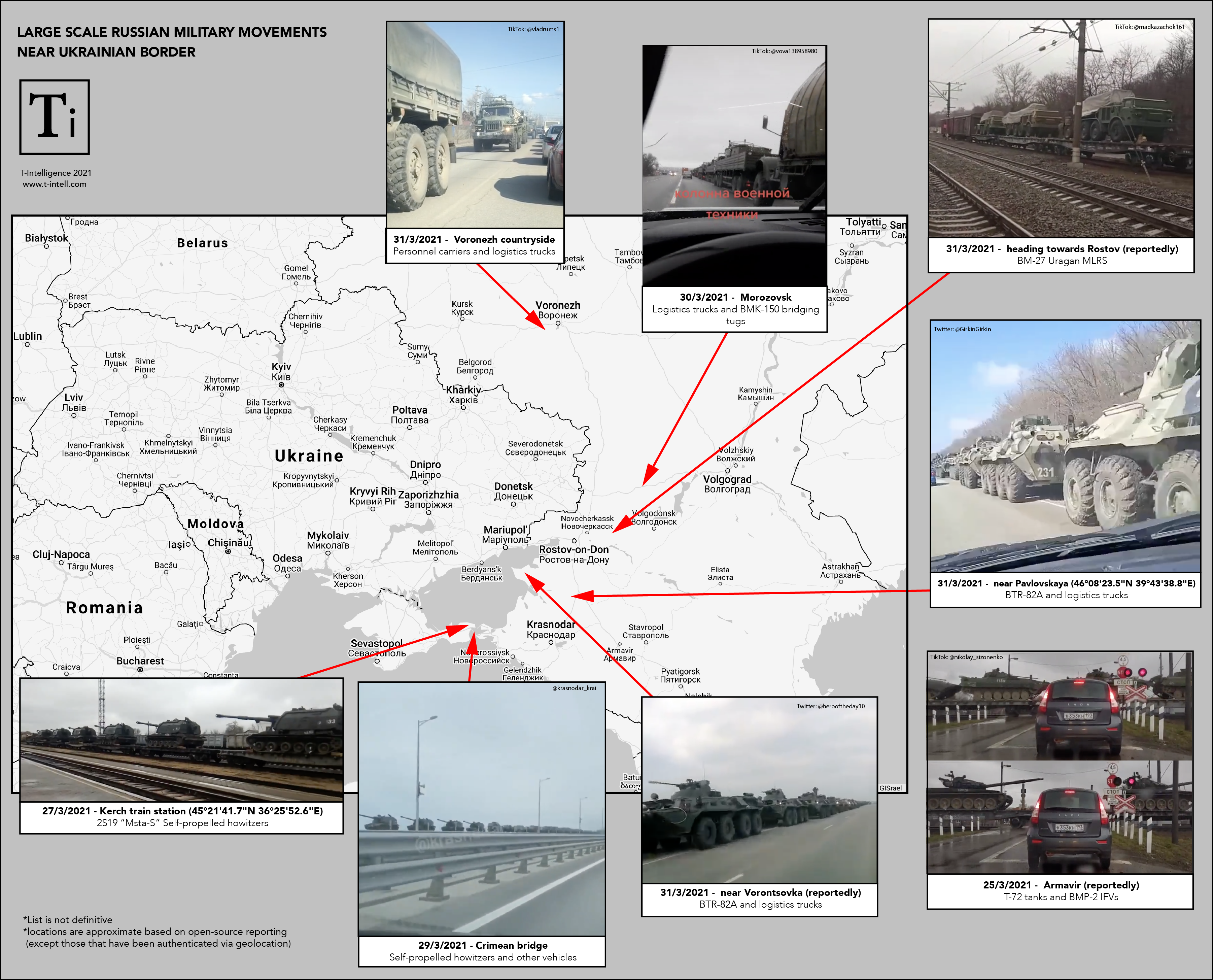 OSINT map aggregating and georeferencing videos of Russian military movements near Ukraine, as documented on social media between March 27-30 (T-Intelligence)

Russia’s recent troop movements have alarmed the international community that fears a reignition of the war in eastern Ukraine or, even worse, the opening of a new front from Crimea.

Operated by the United States Air Force (USAF), the RQ-4 Global Hawk drone is at the forefront of Washington’s ISR (Intelligence, Surveillance, and Reconnaissance) operations in the Black Sea region. Based in Naval Air Station Sigonella (Italy), the RQ-4 Global Hawk with registration number 11-2049, either callsign FORTE10 and FORTE11, conducts frequent flights over eastern Ukraine. Th RQ-4 Global Hawk is a long-endurance unmanned aerial vehicle (UAV), meaning it has a 24 hour+ flight autonomy. Combined with hi-resolution cameras, the RQ-4 can provide a crystal-clear, live feed of Donetsk and Luhansk’s frontlines to decision-makers and commanders back at base. As seen in the screenshots attached, the RQ-4 loiters extensively and publicly over designated areas of interest. 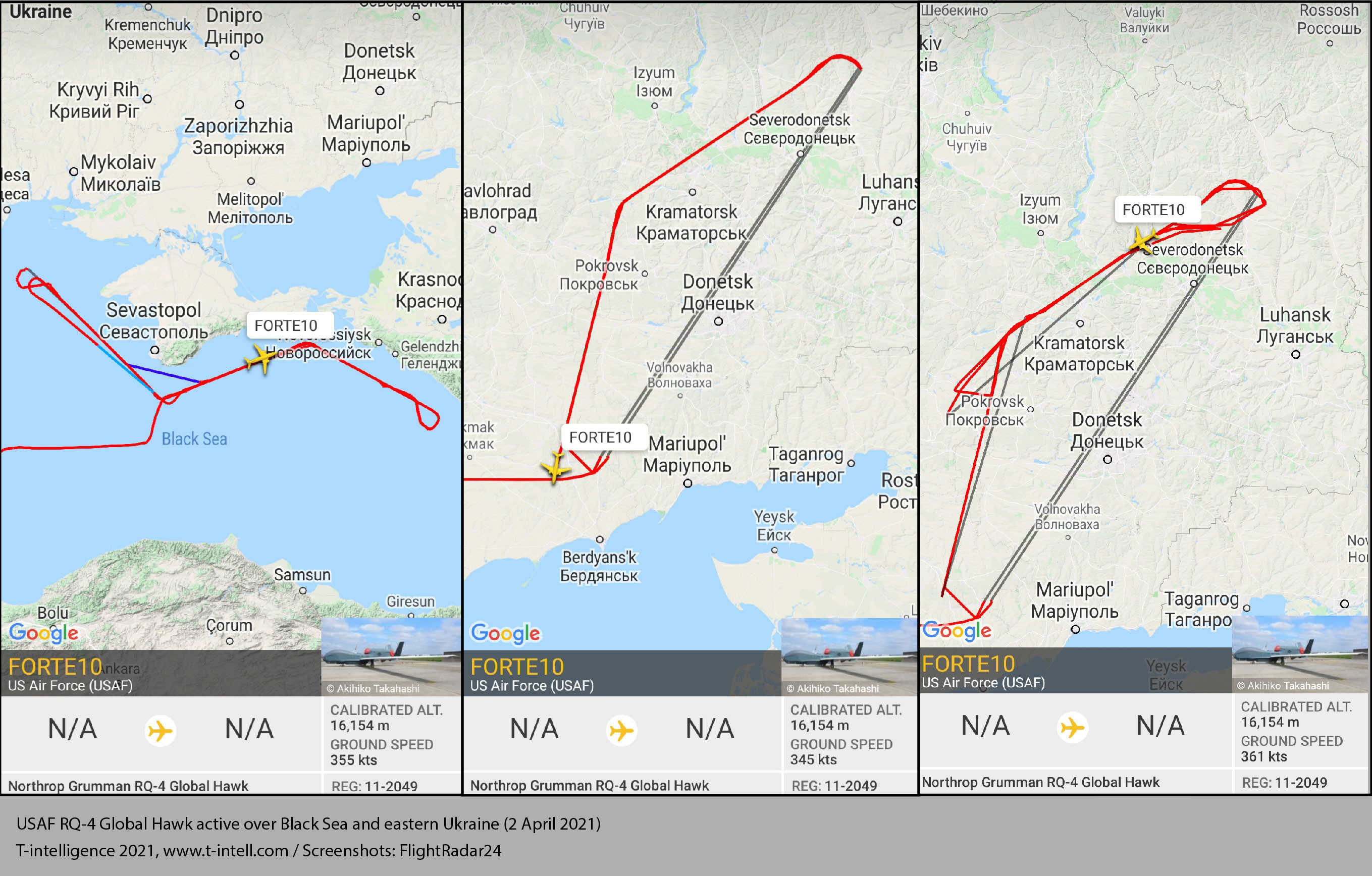 While FORTE10 was a daily visitor of the region even before the latest escalation, its recent activities are likely connected with Russia’s troop build-up. In the screenshot below (11 April), the RQ-4 (now FORTE 11) was orbiting over the Kherson-Mariupol area, north of Crimea, after completing multiple passes over the frontline in Donbas.

The drone’s flight path is unusual and suggests that U.S. commanders are seriously considering that Russia might open a new front in the war against Ukraine and seize the Crimean canal. Ukraine dammed the North Crimean Canal in 2014. As a result, the Russian-occupied Crimea lost nearly 90% of its fresh water supply, leaving it dry. While Moscow plans to solve this issue by re-routing four rivers into the Mezhgorny reservoir by 2024, many observers fear that Russia might use military action to seize the Crimean dam.

Besides the “daily FORTE”, there various other NATO country platforms surveilling the Black Sea region.

Besides IMINT, the P-8A can exploit emission from the electromagnetic spectrum. Thanks to its ALQ-240 Electronic Support Measure (ESM) suite, the P-8 can geo-locate and classify enemy radar emitters. On top of that, the P-8 can launch drones equipped with specialized sensors to detect submarines based on fluctuations in the Earth’s magnetic field.

While the P-8 Poseidon does its thing in the northern Black Sea. Currently in holding pattern near #Kerch strait. pic.twitter.com/QvRRKSL9SV

This sensor fusion is invaluable to keep a watch on the Russian Navy’s activity around the Crimea peninsula and Krasnodar Krai. The Poseidon becomes an ever more relevant platform as Russia recently announced that it would deploy ten warships from the Caspian Sea into the Black Sea.

The Poseidon’s predecessor platform, the P-3 Orion, is the U.S.’s other platform tasked with monitoring Russia’s build-up from an air-naval perspective. A rare occurrence, the P-3 acts as a force multiplier for the U.S. ISR efforts.

We have observed two P-3 variants operating in the area: the P-3C Orion and the EP-3E ARIES. While the Orion is an old airframe, it can still pull its weight in maritime intelligence collection and fulfil SIGINT duties.

The other variant observed is an evolution and conversion of the Orion, known as the EP-3E ARIES II (Airborne Reconnaissance Integrated Electronic System II). Operated by a crew of 22+ specialists, ARIES II provides near real-time tactical SIGINT and full-motion video intelligence to commanders. ARIES can also intercept human communications (Communication Intelligence/ COMINT) and exploit a wide range of electronic emissions from deep within enemy territory.

Plus, the EP-3E ARIES flight crew also brought some humor into the mix. During a flight around Crimea on 10 April, an ARIES II appeared on flight trackers with the callsign “AK47,” and claimed to be an “AirAsia” flight. 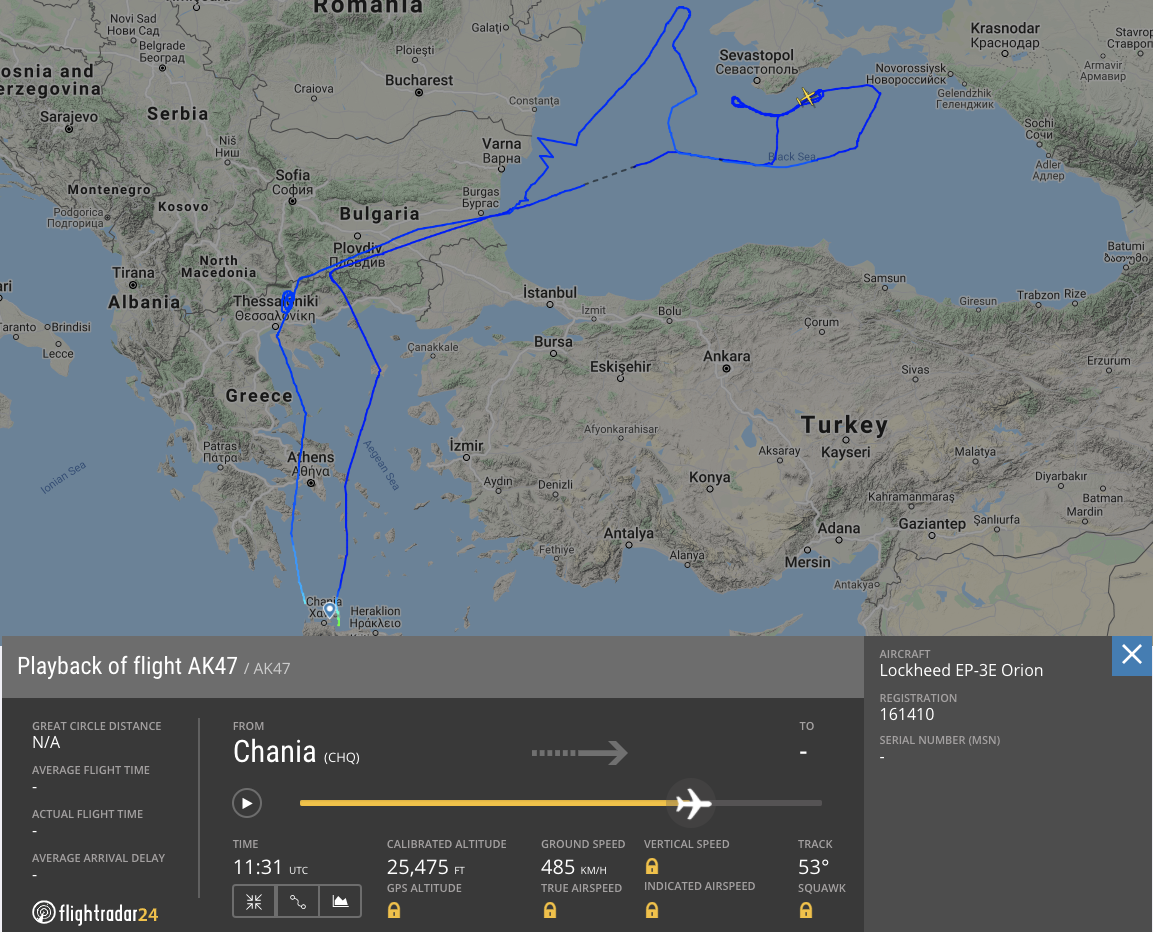 The last but not least platform active in the area is the Royal Air Force’s RC-135W Rivet Joint, operated by the 51st Squadron from RAF Waddington. The RC-135W is an Electronic Intelligence (ELINT) aircraft that can monitor radars, communications, and other signals emitted by the Russian units in Crimea.

ELINT aircraft are particularly good at mapping out the enemy’s Electronic Order of Battle (EOB). EOB typically includes the identity, capability, operating details, and location of enemy threat emitters and their role within an integrated air defense network. 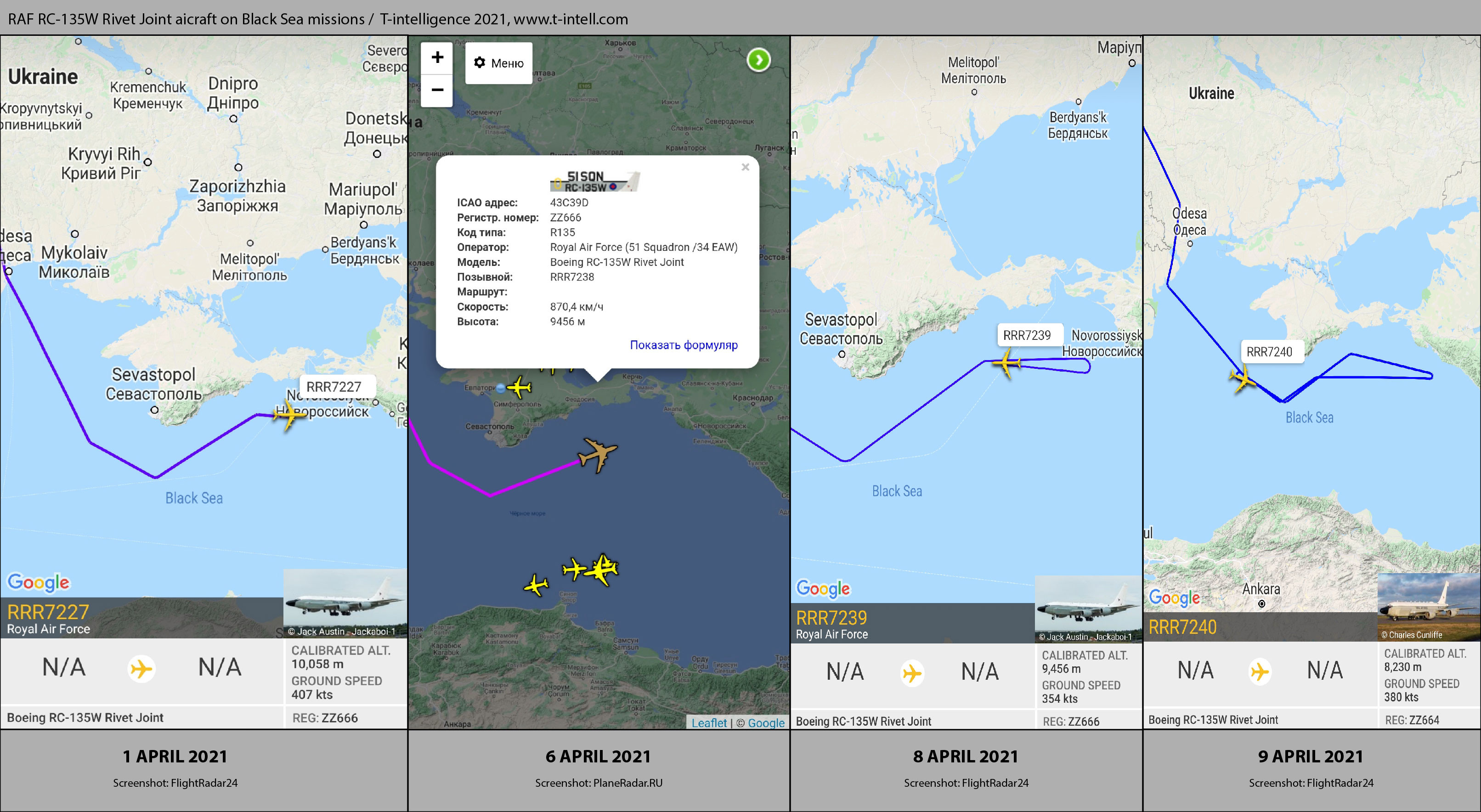 Many of the aircraft listed have also operated simultaneously in the Black Sea theater. The tweet attached shows the airspace over the Black Sea on 6 April.

An RQ-4 UAV was completing its second orbit over Severomonsk, while the RAF’s RC-135W was active near the Kerch Strait. Outbound from Sigonella, a P-8A Poseidon was on its way to join to ISR party.

Another mentionable ISR party took place on 14 April and featured a different assembly of allied aircraft. A U.S. EP-3E Aries II from Souda Bay (reg. no. 16140) scanned Crimea’s southern coast for signals and other emissions. Further down south, a Turkish Navy ATR C-72-600 aircraft was patrolling the Black Sea’s midsection, making a rare appearance on flight trackers. The “no callsign” aircraft is the US Navy’s P-8A Poseidon (outbound from Sigonella) on its way for another mission over the Black Sea.

One of NATO’s few independently-operated RQ-4 Global Hawks was was also active in the region. However, the drone deactivated its transponder before we had the chance to screenshot it.

ISR platforms such as those observed on flight trackers enable commanders and decision-makers to “see and hear” what the Russian military is preparing near Ukraine. These missions are critical to ensure that NATO will not be caught by surprise should Russia mount a new sneak attack.

While Russia’s build-up is at 2014-2015 levels and poses a credible threat, there is still no clear indication that Moscow intends to launch a new offensive in Ukraine.

T-Intelligence will continue to monitor the situation.

This article has been updated on 14 April to include a new image of an ISR “party” and a paragraph explaining it.

"Do Not Enter:" Using OSINT to Monitor Russia's Wargames in the Black Sea