Last week, the Black Sea became the latest theatre upon which tensions flared between the United Kingdom and Russia. On June 23, the British Royal Navy’s Type-45 HMS Defender entered contested waters off the Crimean Peninsula while sailing from Odessa (Ukraine) to Batumi (Georgia). As expected, Russia reacted aggressively, sending fighter jets and warships to taunt the Defender.

Unpicking these events proved difficult at first, given inconsistent reports from both the Russian and British militaries. However, nearly one week on, the fog of uncertainty has somewhat lifted, and the discovery of classified Ministry of Defence (MoD) documents at a bus stop in Kent (England) on June 27 has established a broader picture. The incident is part of a geopolitical contest in the region that has simmered for weeks.

Russia opened with a bang. On June 23, Russian media reported that the HMS Defender had entered Russian-controlled waters, and Russian forces had subsequently fired warning shots and dropped bombs in the destroyer’s pathway. Initially, many media outlets speculated that Russia was making baseless accusations and blowing events out of proportion.

The MoD downplayed the severity of the events. According to the MoD, the HMS Defender was “conducting innocent passage” and was not the target of Russia’s warning shots. The MoD’s rather bland coverage of events was at odds with reports from BBC Defence correspondent Johnathan Beale, who was on the Defender during the incident. According to Beale, the crew of the Defender took battle stations as Russian warships shadowed the British vessel and issued threats. BBC audio provides evidence that jets could clearly be heard overhead. Beale also mentions artillery shots from afar.

The HMS Defender entered Russian-claimed waters by two nautical miles and was prepared for some degree of confrontation. However, the Royal Navy transited the area using an internationally recognized shipping lane. The international community does not recognize Russia’s claim over Crimea or the adjacent waters. De jure, Crimean waters still belong to Ukraine.

The incident was a tester for how Russia would react to a NATO sail through. The MoD’s classified documents left behind a bus stop in Kent (England) corroborate this assessment. The papers highlight route options for the HMS Defender and estimate Russian reactions to the proposed routes. The timing of the (literal) unearthing of these documents in the face of Russian rhetoric points to a likely composed leak to set out the motivations behind the Defender’s movements. Without officially setting the record straight, the MoD has proven a point. 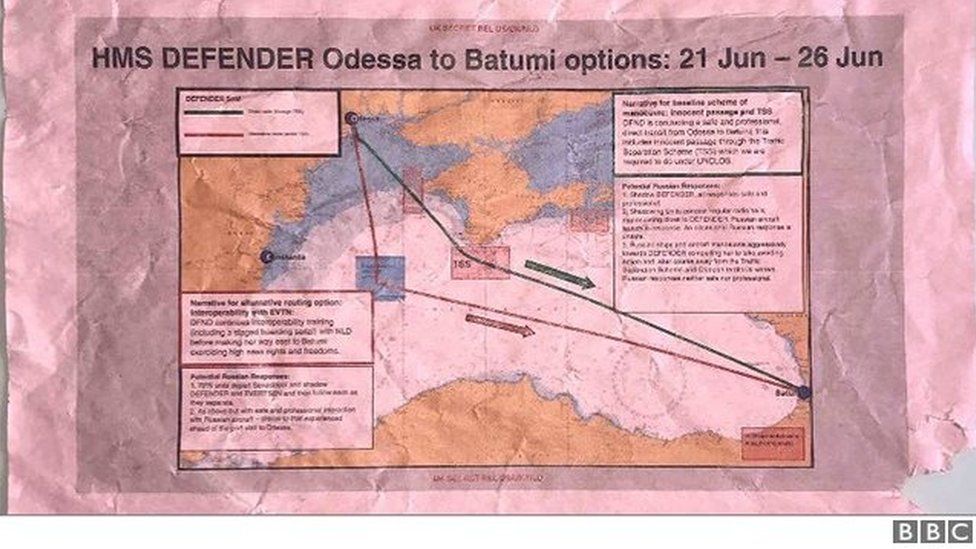 The HMS Defender’s controversial voyage aimed to strengthen the British-Ukrainian alliance. In plotting a course through what it, and most of the world, deems internationally recognized Ukrainian waters, London rejects Russia’s claims over Crimea. Incidentally, on the day of the skirmish, the UK issued a press release stating that the UK and Ukraine have signed an accord to boost Ukrainian naval capabilities. Part of the agreement is the commitment to building a naval base in the Black Sea, which will serve as the primary base for Ukraine’s fleet.

Moscow was probably aware of the Defender’s plans to sail through Russian-claimed waters and responded with a disinformation campaign. Before the incident, on June 18, Russia falsified the tracking data of the Defender and another NATO warship. The ‘spoofed’ automatic identification system (AIS) data put the ships within two nautical miles of Sevastopol. However, port camera footage confirmed that both warships were still docked in Odessa.

Russia pulled an identical move on another ship, the USS Ross, on June 29. Spoofed AIS data falsely showed that the USS Ross was nearing Crimea, when in fact, the American vessel was also still ported in Odessa.

The incident was a preamble to the Sea Breeze 21 multinational exercise this week.  Led by the US and Ukraine and encompassing 30 other states, this year’s edition is the largest in the history of Sea Breeze. Not long after Sea Breeze 21 kicked off, the Netherlands’ MoD reported that Russian jets had harassed the Dutch HNLMS Evertsen frigate in international waters. Russia will very likely continue to rattle the sabers in protest of the multinational drill.

Armed Russian military jets caused a dangerous situation in the Black Sea near HNLMS Evertsen last Thursday. The aircraft repeatedly flew dangerously low over and close to the ship and carried out mock attacks. HNLMS Evertsen was in international waters during these harassments. pic.twitter.com/fcY1nH392V

Further escalations between the UK and Russia in the Black Sea have to be expected. British-Russian relations are at a low due to the Novichok poisoning of the Skripals in Salisbury in 2018. As the UK is redefining its role in the post-Brexit world, London is eager to project itself as a solid military force supporting Ukraine. Furthermore, the recent events underscore that the UK is willing to dabble in the evolving ‘grey zone’ of information warfare.  By downplaying the events of June 23 and then setting the record straight through the “loss” of classified documents, London plays fast and loose with the truth akin to, but not as versed as the dis/information warriors in Moscow.

Hot Skies Over the Taiwan Strait: The New Normal of Chinese Incursions