During a press briefing in Riyadh, the Saudi Defense Ministry revealed wreckage recovered after the air attack on the petrochemical facilities in Abqaiq and Khurais. The physical evidence suggests that the weapons used in the attack were a mix of Iranian land-attack cruise missiles (LACMs) and expendable unmanned aerial vehicles (XUAVs). According to the Defense Ministry, eighteen XUAVs struck the Abqaiq oil facility. Three LACMs malfunctioned and crashed in the Saudi desert en route to Abqaiq. The raid on Khurais oil field was conducted by four LACMs.

LACM. The Saudis identified the LACMs as the Iranian-made “Ya-Ali.” With an estimated engagement range of 700 km, the Ya-Ali carries a 200 kg warhead. However, the majority of experts agree that the wreckage bears more similarity with the Iranian “Soumar” LACM or the “Quds-1”, a re-branded version of the Soumar operated by the Houthis.

Due to lack of knowledge, the #SaudiArabia Ministry of Defense has misidentified the cruise missiles which #IRGC used during attacks at #Khurais & #Abqaiq as Ya-Ali, but these are clearly Quds-1, a derivative of #Iranian made Soumar. pic.twitter.com/qMMCJDIMp2

While all LACMs seem to have been inspired by the Russian-made Kh-55 Granat (NATO Reporting name: Kent), which was smuggled by the IRGC from Ukraine in 2001, the three missile-types differ in design and mechanical features. Compared to the Ya-Ali, the Quds-1’s rocket booster is smaller and its engine is not internally carried, but situated on the airframe. While similar at first sight, the Quds-1 and Soumar differ in size and airframe design (aft fuselage, stabilizers, exhaust, wings). The two missiles also use different engines. The Quds-1 is believed to be powered by the Czech-made TJ100 turbojet propeller or a replica of it. Both the Quds-1 and the Ya-Ali are believed to share the same 700 km operational range, roughly half of their larger Soumar “cousin.”

Although operated by the Houthis, the Quds-1 is undeniably linked to Iran’s evolving family of LACMs. Analysts believe that Iran is secretly producing simplified knockoffs of its missile systems for exclusive use by its proxies. This allows the IRGC to equip its allies with high-end conventional capabilities, while maintaining political deniability.

UAV. The Saudi Defense Ministry identified the loitering munition used in the Abqaiq attacks as “Iranian Delta Wave UAVs.” The IRGC-AF have been secretly working on a myriad of UAV programs for the past decade. While numerous operational and experimental airframes have been unveiled in private or semi-private events for government officials, there is sparse information regarding the Delta Wave XUAV. 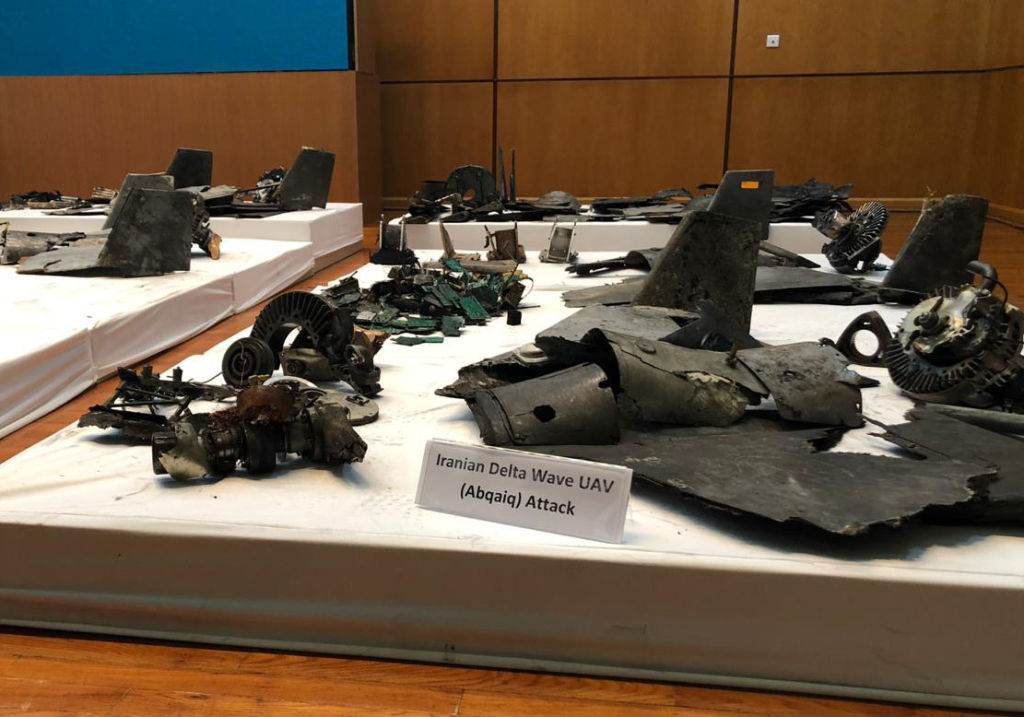 As per ARS Technica: “drone wreckage including one described as an Iranian Delta Wave UAV. The design resembles earlier delta-winged “kamikaze” drones built by Iran.” Vivian Nereim/Bloomberg via Getty Images

Analysts have found that the Delta Wave UAV is based on the IRGC’s “Toofan”, an expandable/ “suicide” UAV capable of 250 km/h top speed for one hour. However, the variants used in the Khurais and Abqaiq attack were smaller with potentially “stealthier” characteristics.

The relatively medium range of both the LACMs and XUAVs add extra credibility to American, Saudi, and  independent OSINT findings that the attack did not originate from Yemen, but from the north, with Iran’s southwestern province as the likeliest launching point.

The kinetic solution as well as the flight path proved ideal to bypass Saudi air defenses. The Iranian weapons flew low (not higher than 200 meters) and slow, blending with ground clutter, which likely caused radar dopplers to filter them out. To support the attack, the IRGC-AF have certainly obtained actionable intelligence regarding the radio-electronic order of battle of the Royal Saudi Air Force in Abqaiq and Khurais and of US installations in Kuwait, using both human reportings and geospatial means. With Kuwait as the likely intermediate airspace, the IRGC gambled that local US air defenses were either inactive/idle or subject to disadvantageous rules of engagement (force protection only).

Open-source commercial satellite imagery dating from June, 2019 shows that the AN/MPQ-53 sensor near Abqaiq was pointed towards the southwest. In addition, the IRGC-AF likely collected critical information on whether the point air defense installations such as the “Shahin” and “Oerlikon” (aided by Skyguard radars) near Abqaiq were active.

Using a custom script in Sentinel-1 SAR multi-temporal imagery, OSINT analysts have found that none of the Saudi AN/MPQ-53/65 radars were active on Saturday (September 16, 2019). VH-VV polarization and ascending-descending orbit convergence show that only Bahraini, Qatari and Emirati PATRIOT systems and some (non-AN/MPQ-53/65 ) radars in Kuwait also were “online.”

No patriot radars have been active in recent months (at least not consistently) in the vicinity of the plant, not in the short range required to detect low flying cruise missiles or drones. Closest installation is in Barhain.
(using Sentinel 1 CSAR sat for detection) pic.twitter.com/1nOvh9hioj

For more on the September 14 Air Attack on Saudi Arabia consult our preliminary attack path assessment and the initial after-action briefing.

This is How Iran Bombed Saudi Arabia [PRELIMINARY ASSESSMENT]