Evacuation “Shattered Glass”: The US/ Coalition Bases in Syria [Part 2]

HARM
No Comments on Evacuation “Shattered Glass”: The US/ Coalition Bases in Syria [Part 2]

DISCLAIMER: This compilation is based on publicly available information collected through open-source intelligence (OSINT) techniques. The release only covers the Coalition/US bases that have been sanitized and evacuated. An exception is the well-known al-Tanf garrison in the 55-km exclusion zone. Positions in eastern Syria, which are still manned by the Coalition, will only be published after the forces have withdrawn. T-Intelligence has been aware –  down to exact grid coordinates – of the location of CJTF-OIR/ US bases in Syria since their construction. However, out of respect for OPSEC and force protection, we have refrained from revealing their locations.

This is the second part of our Geospatial Intelligence (GEOINT) release on the military installations of the Coalition Joint task Task Force-Operation “Inherent Resolve” (CJTF-OIR) in Syria. You can find the first part of the series, which covers the military bases in Aleppo province and provides a background of the Coalition’s mission in Syria, here. The second part features the former CJTF-OIR bases in Raqqa province.

Combat operations in Raqqa province began in mid-2015, when the CJTF-OIR and its local partner forces (YPG Kurdish militia and select Sunni Arab groups) liberated Tel Abyad and parts of the Turkish borderlands from ISIS. Afterwards, the CJTF-OIR focused on the main strategic objective of expelling the jihadist terror group from its self-proclaimed capital of Raqqa.

The Syrian Democratic Forces (SDF), backed by the Coalition’s airpower and special operations forces (SOFs), initiated a five-phase offensive to besiege ISIS forces in Raqqa. Operation “Wrath of the Euphrates” commenced on 6 November 2016 from the city of Ain Issa, which had been liberated in the previous months. Ain Issa was a key location for the Raqqa campaign as it hosted a significant CJTF-OIR mission support site, a logistics center, and a major internally displaced people (IDP) camp. 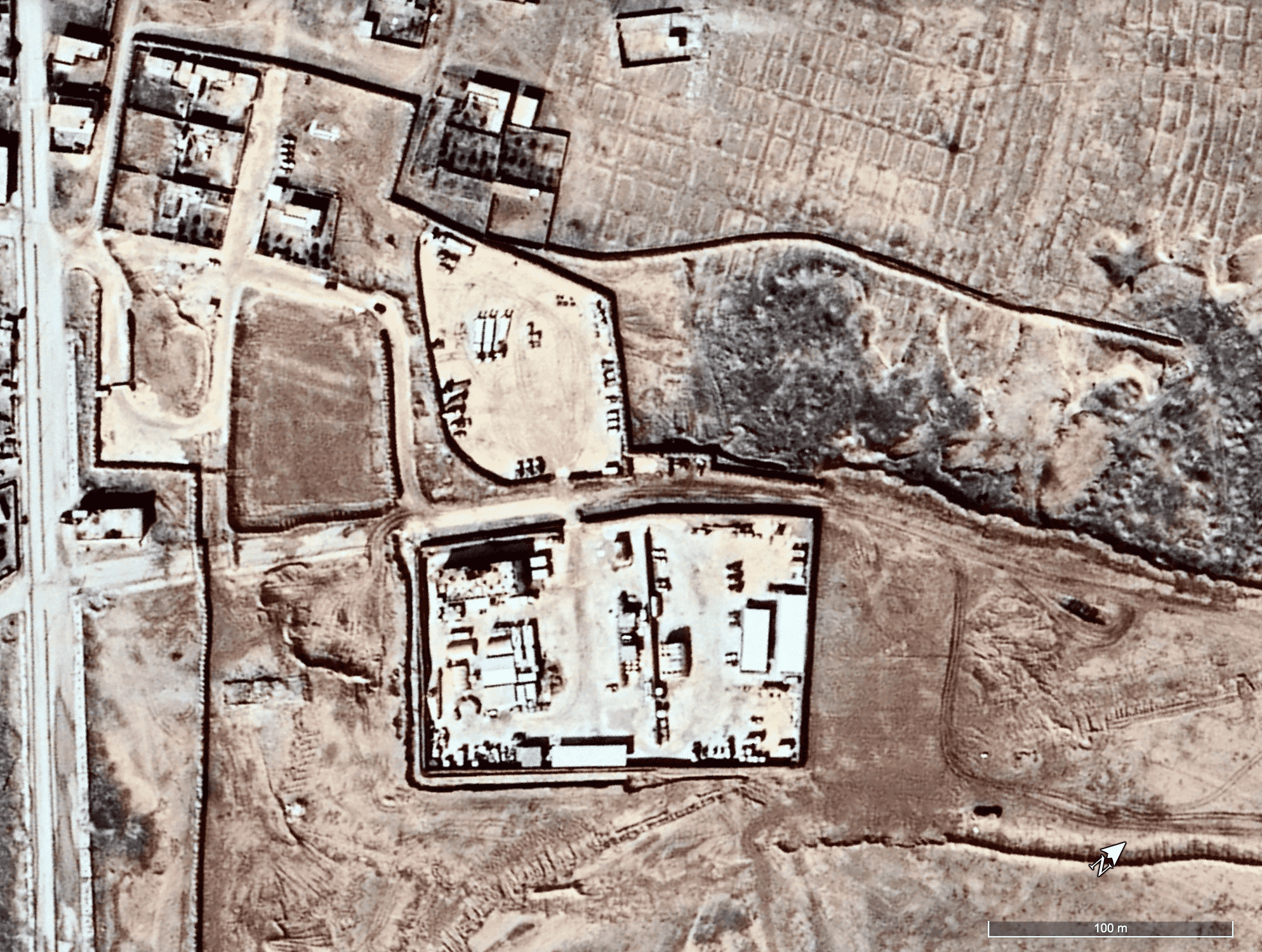 PART II. The @CJTFOIR installations in #Raqqa province (only those evacuated). The first base is a mission support site in #AinIssa, which was pivotal in the SDF’s five-phase offensive against ISIS’ self-proclaimed “capital” in Raqqa. pic.twitter.com/ClEd6pkHKN

Infrastructure: The pre-existing site, a 400 square meter walled courtyard with a large two-story building, likely served an administrative role for nearby grain silos. After liberating the area from ISIS, the Coalition expanded the infrastructure in terms of size and structures. The CJTF-OIR has built around five large buildings/warehouses, several barracks tents, and a plethora of prefabricated one-story structures. A second walled site, primarily used for parking lorries and storing shipping containers, was built west of the dirt road. The outpost also includes five houses with courtyards southwest of the parking lot. A wider security perimeter was built to secure the entire area. The location is ideal to defend Ain Issa from attacks from the southeast.

Status: Abandoned by the CJTF-OIR in November 2019. Under SDF control since then. 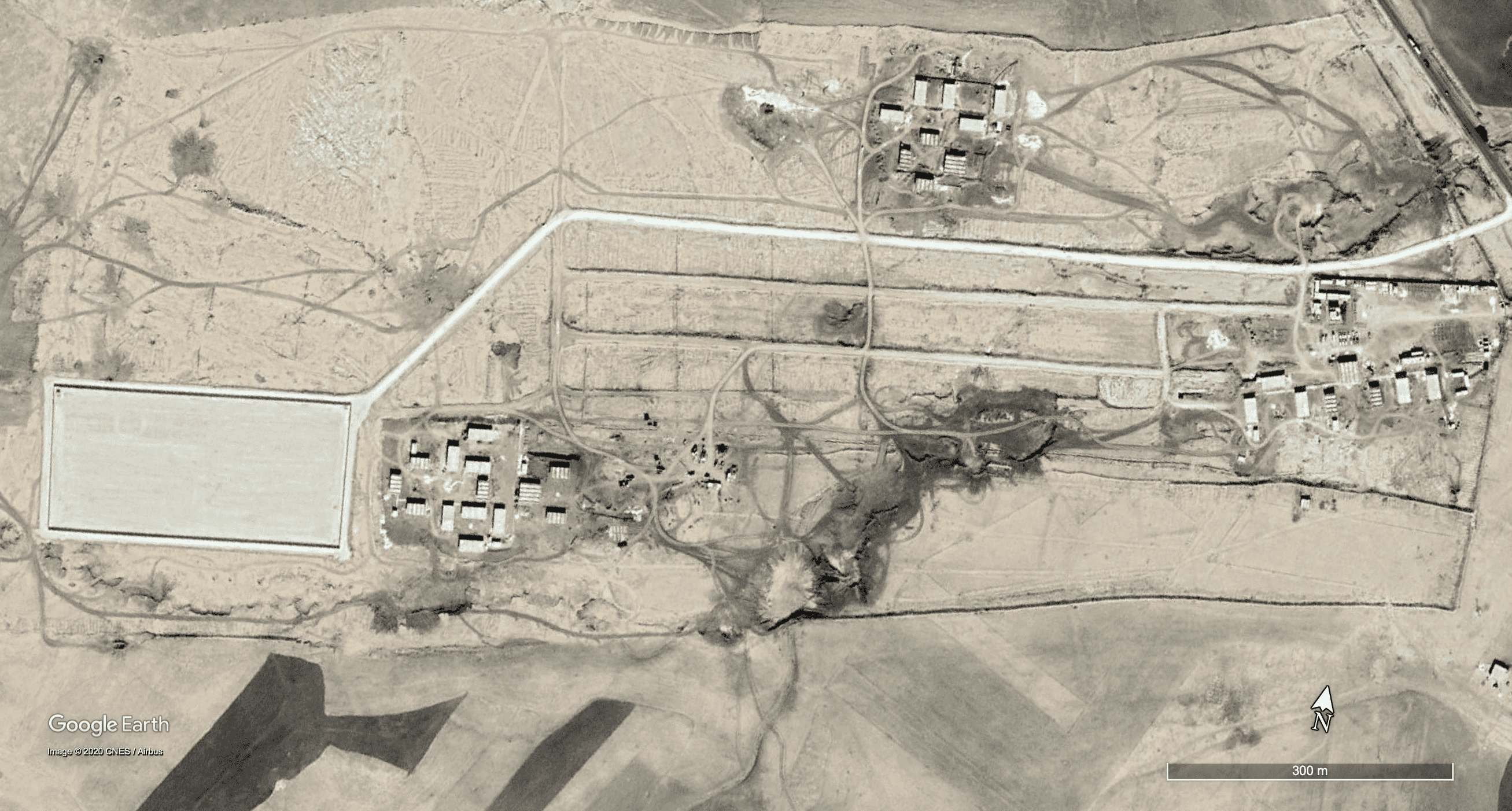 Purpose: Host and dispatch logistics along the line-of-communications to in-teather mission support sites and other facilities such as the nearby IDP camp near Ain Issa.

The coalition established a major logistics base on a former SAA training center near Ain Issa in early 2018. pic.twitter.com/ETdLS2Ltxn

Infrastructure: Previous to ISIS and the Coalition occupation, the Syrian Arab Army (SAA) used the site for training. The Coalition took advantage of the semi-prepared land and established a large logistics base (LB). The LB consists of three clusters of buildings (at least 10 buildings each), traversed by a dirt road leading to a large asphalt pen. The latter was intended to host military and logistics vehicles, but also helicopters if necessary.

Status: Abandoned by the CJTF-OIR in November 2019. Currently under SDF control.

The first objective of phase one, neutralizing ISIS defenses south of the M4 highway, was achieved on 16 November 2016, when the SDF liberated a terrorist stronghold in the village of Tel Salman. With the preparations for the second phase of the operation underway, the CJTF-OIR went to work and built a major fire base near Tel Salman. 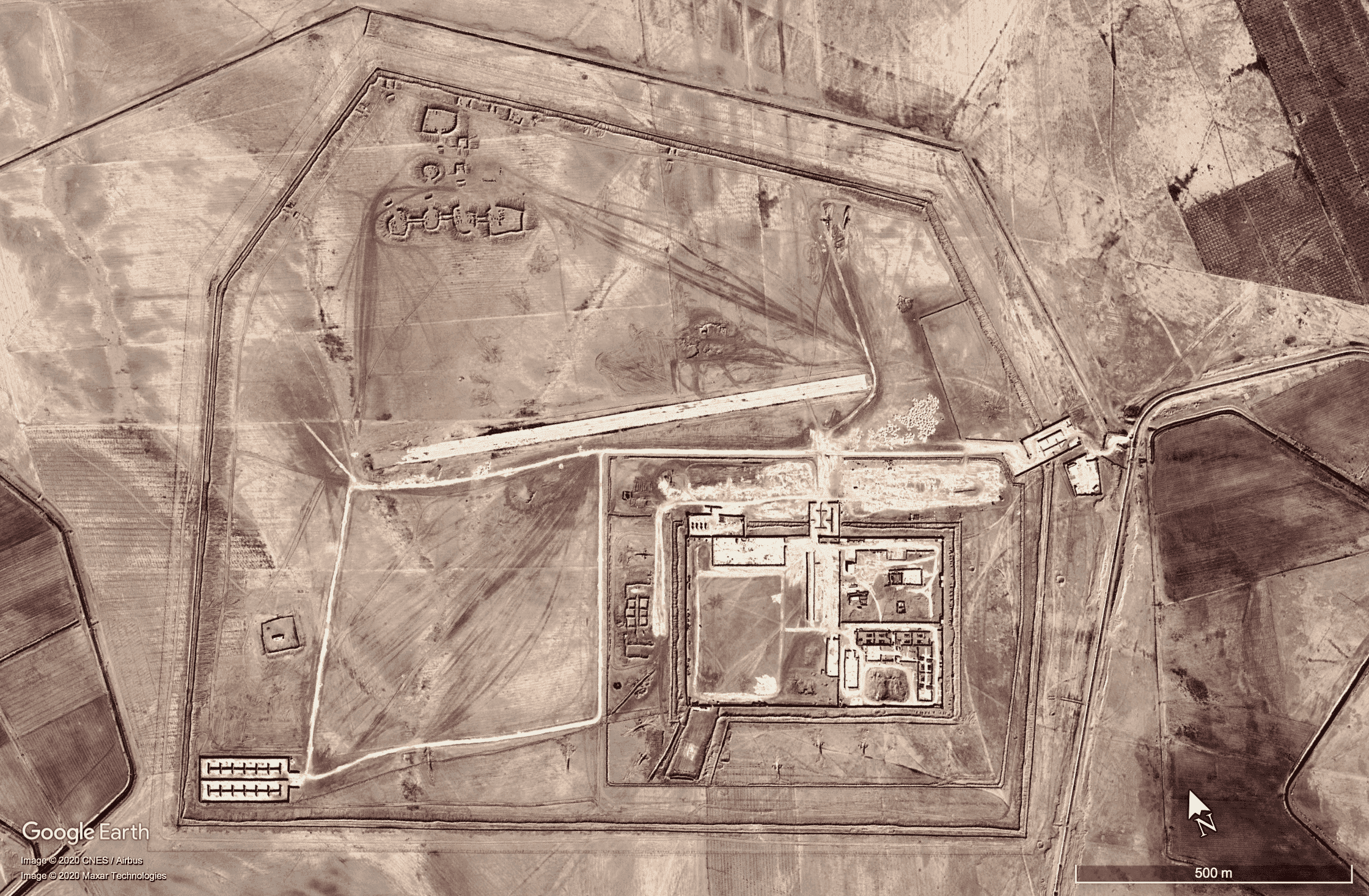 Fire Base near #TelSalman provided artillery and rocket support in the last phases of the SDF/ Coalition offensive to liberate #Raqqa. FB hosted Howitzers and HIMARS. It also helped to forward deploy artillery units down the frontline. Seized by Russian MP after Coalition left. pic.twitter.com/1mPeMdxrZj

Infrastructure: The FB was initially an empty plain with a 1 km-long runway. The base was constructed around the runway in record time to forward deploy fire support assets in support of the siege of Raqqa, namely the M142 HIMARS multiple rocket launcher system (MRLS), mortars and howitzers. Multiple layers of sandbags and dirt walls separate the small housing units from ammunition depots and the many artillery firing positions on the FB’s ground. The base also dispatched field artillery units to the frontline.

Status: Abandoned by the CJTF in November 2019. Under Russian or pro-government control since December 2019.

The second phase of the offensive targeted Raqqa’s western countryside, aiming to cut ISIS’ lines-of-communications to Aleppo province and further reduce the group’s territory. This phase was concluded when the SDF reached the outskirts of Tabqa in mid-January 2017. As the advance brought the SDF 30 km west of Raqqa, the CJTF-OIR established forward logistics bases and more artillery nests close to the frontline. 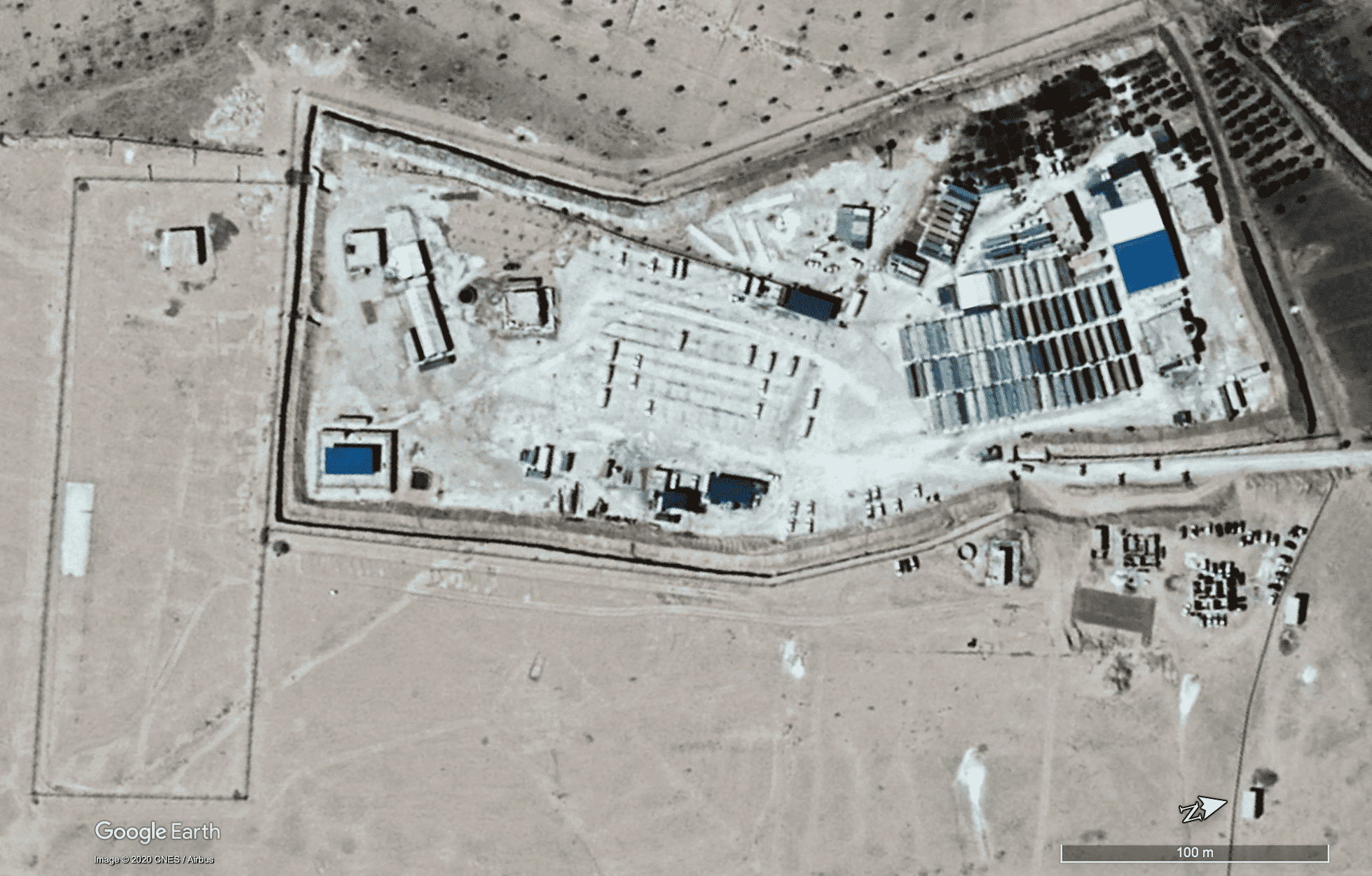 Purpose: Support the CJTF-OIR and SDF ground offensive against ISIS in Raqqa city.

The #Birsan Logistics Base was built in early-2017 after the SDF reached the outskirts of the #Tabqa “triangle” (city, dam, and airbase). Served as a tactical, frontline logistics hub. pic.twitter.com/avoeUAzGwC

Infrastructure: The position was established shortly after Bîrsan (also known as Bir Sana/Ber Viya), a Kurdish village, was liberated from ISIS on 3 January 2017. Dirt revetments were built to define the site’s layout and to serve as a fortification layer. The pre-existing eight houses were re-purposed. The existing infrastructure was augmented with several new structures, including a 100 square meters warehouse, to extend site storage capacity. Some areas were kept clear of structures to store large shipping containers and other logistics crates and to provide a parking space for M114 Humvees, MRAP (Mine Resistant Ambush Protected) vehicles, NSTVs (Non-Standard Tactical Vehicles), and other military vehicles. The dirt road that connects the site to the main road is secured by a checkpoint and anti-VBIED (Vehicle-Borne Improvised Explosive Device) obstacles.

During phase three in March 2017, which isolated Raqqa city from its western and eastern extremities, the Coalition launched an airborne operation that dropped SDF fighters and U.S. Army Special Forces deep behind enemy lines. After a few days of fighting, the CJTF-OIR captured the so-called “Tabqa triangle”: The city, the dam and the airfield. The latter was a Syrian Arab Air Force (SyAAF) base that had housed the 12th Attack Squadron and the 24th Helicopter Brigade until it was seized by ISIS in August 2014. 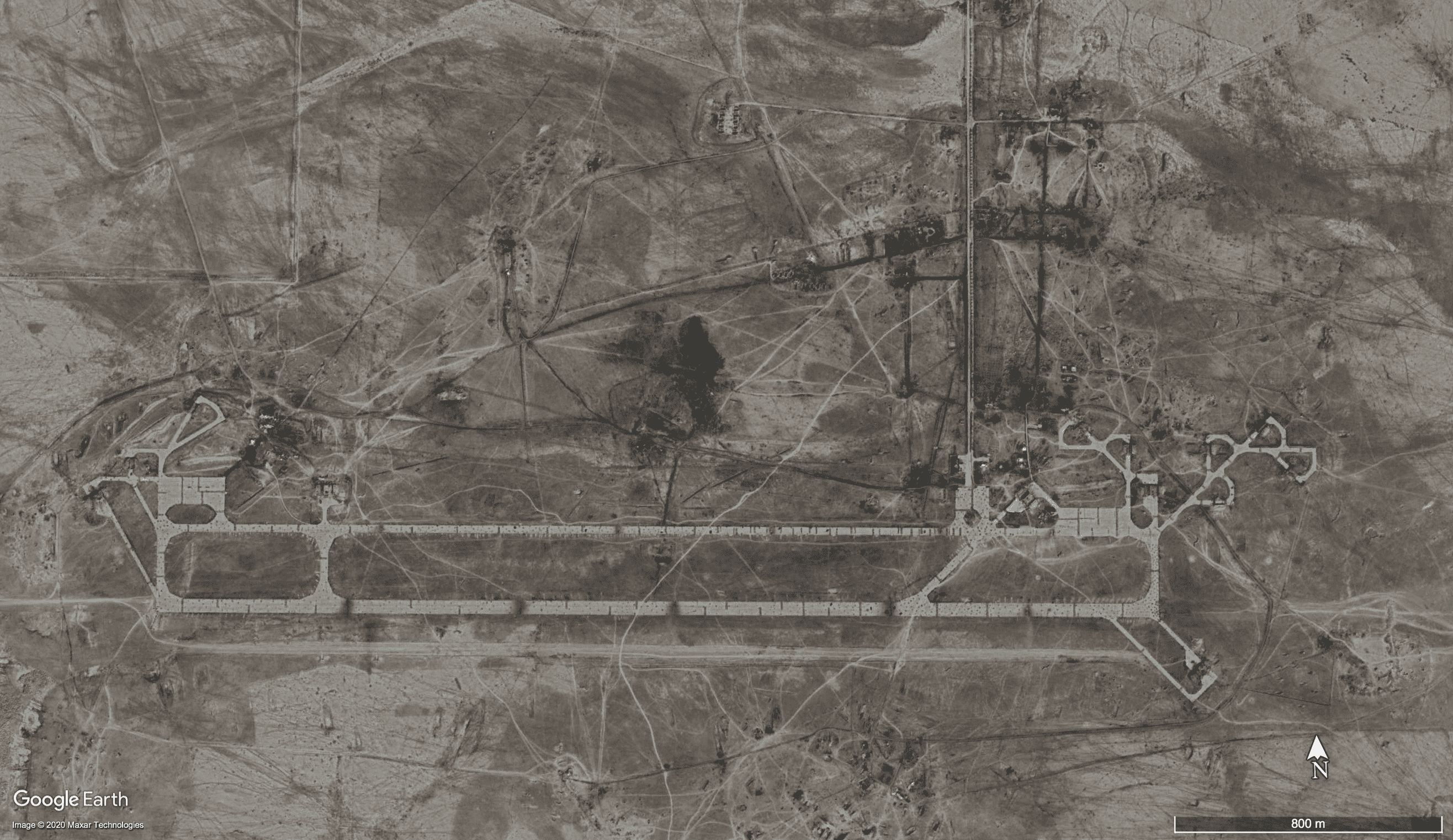 Infrastructure: The AB has been rendered inoperable by successive bombing campaigns against ISIS, first by the SyAAF and then by the CJTF-OIR. The vast majority of buildings and structures have either collapsed or are in an advanced state of degradation. No significant reparations (if any) have been observed on the AB since the Coalition seized it. The high repair costs and immediate proximity to enemy territory (ISIS and SAA) were likely the main reasons why the Coalition did not invest in the AB. However, it was likely used as a Forward Arming and Refueling Point (FARP) for attack helicopters, while on close air support (CAS) duty over Raqqa.

Status: Re-occupied by the SAA in November 2019.

The fourth phase, which targeted the rural belt around Raqqa city, took nearly three months to complete. The fifth phase and subsequent battle for Raqqa took place between 6 June and 17 October 2017, ending with a costly victory for the SDF. The vast majority of the city was leveled by airstrikes, artillery fire, and IEDs, while thousands of ISIS fighters evacuated to the Middle Euphrates River Valley (MERV) under a secret deal with the SDF. We documented the fight in a daily journal, which you can find here (volume 1) and here (volume 2).

In November 2018, in response to Ankara’s threats of invasion, the CJTF-OIR established at least three observation posts (OPs) on the Turkish border. Manned by less than 50 U.S. Special Forces (SFs), the aim of the OPs was to alleviate Turkey’s security concerns over cross-border weapons smuggling between the YPG (the SDF’s main fighting force) and Turkish PKK cells. The U.S. and Turkey also conducted joint patrols on both sides of the border and exchanged intelligence as part of a “security mechanism” deal to de-conflict northern Raqqa province. 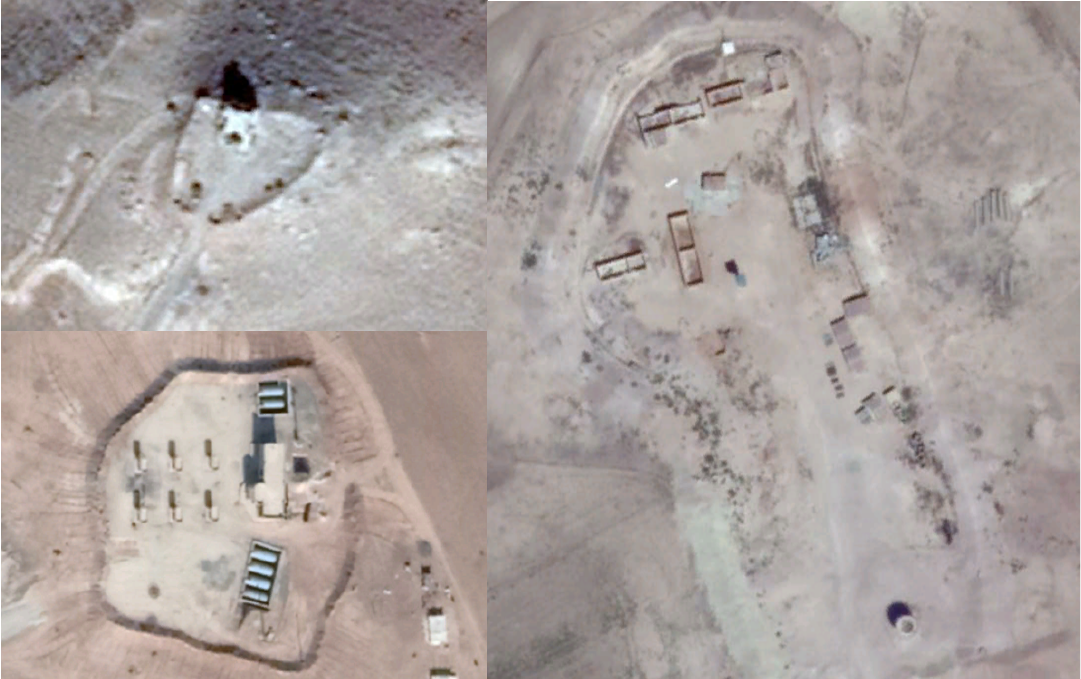 However, as in the case of the Manbij de-confliction agreements, the border “security mechanism” failed to satisfy Turkey’s security needs. In anticipation of Turkey’s air-ground assault on the Tel Abyad- Ras al Ayn (Serekaniye) axis, the U.S. SFs withdrew from their border outposts on 8 October 2019. The forces were repositioned south of the M4 highway, which would become the boundary of Ankara’s Operation “Peace Spring.”