After capturing the majority of provincial capitals, the Taliban entered the Afghan capital Kabul on Sunday (15 August 2021).  Despite the speed of their advance over the past weeks, most observers did not expect the Taliban to reach Kabul this quickly.

The Taliban seized the Afghan Presidential Palace on Sunday afternoon without firing a shot, throwing Kabul into chaos. International diplomatic missions and Afghan nationals have since scrambled to reach Hamid Karzai International Airport (KBL) – the sole gateway for people trying to flee the country. KBL has since become the epicenter of international evacuations.

Initially, commercial and military flights evacuated embassy staff and Afghan citizens at a steady pace. NATO military forces, especially 7,000 US troops that President Biden ordered back into Afghanistan, are guarding the evacuation. Nearly 100 aircraft have facilitated the evacuation so far, including American C-17s and C-130s, according to Twitter user @DefenceGeek’s flight tracking.

Created with help from the amazing @vcdgf555 (go give them a follow if you don’t already!)#Afghanistan #Taliban pic.twitter.com/qjNWeV25w5

Aerial tankers such as KC-135s have been operating non-stop over the Gulf of Oman and Afghanistan to refuel various planes airlifting people out of Kabul, as flight tracking data shows. 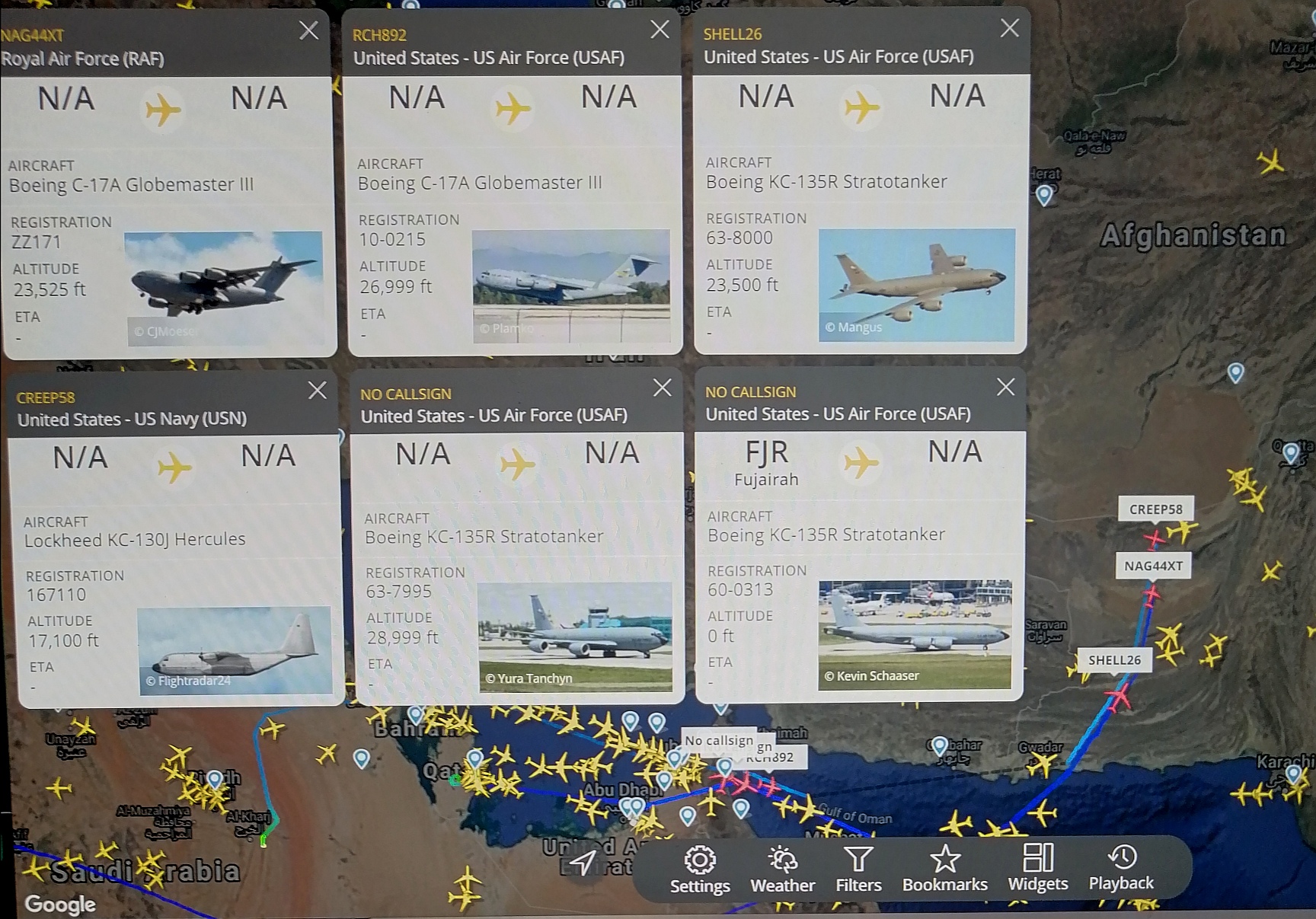 Over the last 24 hours, the situation at the airport has dramatically deteriorated. Social media content shows people climbing over walls to reach the aprons and flocking the runway in a desperate attempt to board departing flights.

Video: People run on tarmac of Kabul international airport as a US military aircraft attempts to take off. pic.twitter.com/9qA36HS0WQ

At least three persons fell to their death after they clung to the landing gear of an aircraft that took off from KBL. Several other civilians were injured in the stampede that ensued on the runway.

Exclusive – The video shows a flight from #Kabul airport where two people are thrown from a plane into the the people’s homes.#Afghanistan #Taliban pic.twitter.com/GlSgjNApJj

Very high resolution satellite imagery released by Maxar Technologies shows in clear detail the chaos that has engulfed KBL, with crowds of Afghans blocking runways and aprons, and Kabul.

New high-res #satellite imagery (10:36 am local time, August 16) of the chaotic scene underway at #Kabul’s Hamid Karzai International Airport in #Afghanistan as thousands of people converged on the tarmac & airport runways as countries attempt to evacuate personnel from the city. pic.twitter.com/L6lhlVms54

The desperation of Kabul residents shows that they would rather risk their lives fleeing Afghanistan than live under Taliban rule.

On Monday afternoon, the U.S. military took command of Air Traffic Control (ATC) at KBL and closed the airspace for civilian airlines to prioritize military flights. As a result, many commercial aircraft inbound for KBL had to be rerouted to alternate airports or return to their place of origin.

On Monday evening, ATC grounded all flights at KBL after the U.S. military lost control of the airport. With thousands of Afghans occupying the runways, evacuations had effectively stopped for several hours on Monday. With flight operations interrupted, many late-comers – namely European states – struggled to exfiltrate their people and associated staff.

For example, German military aircraft only left for Afghanistan on Monday morning and completely missed the window to land at KBL. Following a brief layover in Baku, the two German A400 planes resumed their flight to Kabul. After circling for several hours, waiting for an opportunity to land, one A400 touched down on Monday night. The other plane had to divert to a “secure third country” (likely Uzbekistan) to refuel. Only seven people were evacuated by the German aircraft.

In contrast, the United States, the United Kingdom, Turkey, and others have already carried out successful rescue missions.

One shocking report claims that one U.S. C-17 cargo aircraft, designed for 134 paratroopers, has evacuated around 640 people – mostly associated Afghan nations that applied for the Special Immigration Visa (SIV). In total, the U.S. has evacuated 2,000 SIV a applicants from Afghanistan, according to the Department of Defense. 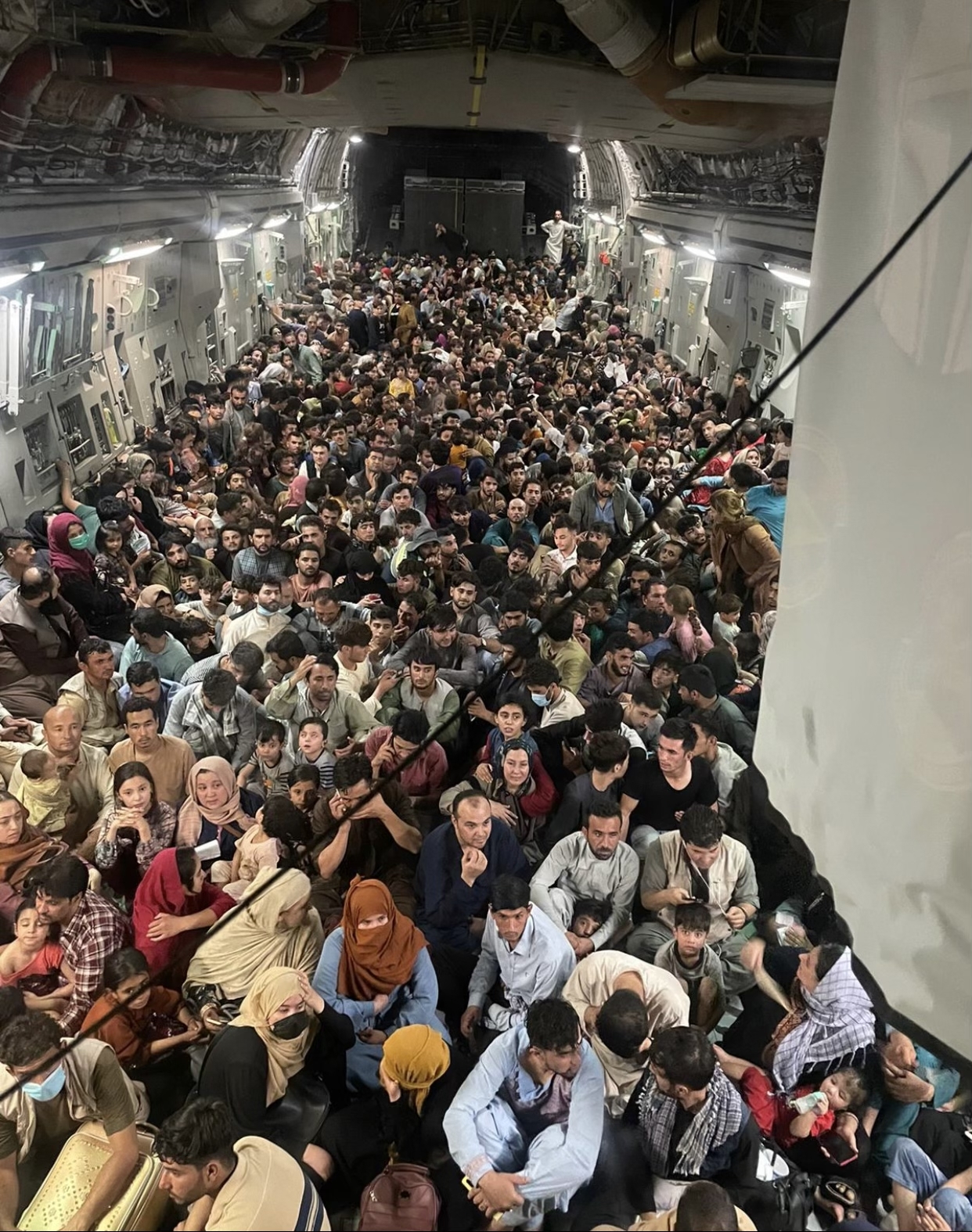 Photo from the inside of Reach 871, the US Air Force C-17 that hauled over 600 people to Qatar

ATC has resumed flights at KBL on Tuesday morning after the runway was cleared. Evacuation of several diplomats and civilians already took place, but the situation remains volatile. It is unclear how long the US troops facilitating the evacuation will be able to control the airport, now that the Taliban is solidifying their control on Kabul.

A Taliban fighter is shooting on a man trying to enter #Kabul Airport.#Afghanistan pic.twitter.com/NU6Nq3fT6B

Considering the poor planning, slow reaction of many European governments and unpredictable security situation at KBL, it is likely that many Afghan nationals (associated staff, such as translators, security staff, drivers, etc.) that assisted international forces will be left behind.  The future of the associated staff is looking stark as they may face persecution from the Taliban. According to social media reports from journalists in Kabul, the Taliban are already searching for Afghans that have worked with Western governments or NGOs. Many of them report that they feel abandoned by the countries that they have supported for many years.

BACK TO THE “ISLAMIC EMIRATE OF AFGHANISTAN”

Kabul residents are afraid that the Taliban will re-impose Sharia law, as they did in the 1990s, with girls and women being forbidden to go to school or work. Despite assurances to the press that they have changed, the Taliban will undoubtedly reinstall their reign of terror and revoke fundamental human rights.

The Taliban have not attacked or interfered with the evacuations at KBL, suggesting that there is at least an informal non aggression pact in place. However, the Taliban have formed a corridor around the airport and set up multiple checkpoints throughout Kabul including on the roads leading to KBL.

We will continue to monitor KBL and compile updates as the situation develops.

Hot Skies Over the Taiwan Strait: The New Normal of Chinese Incursions