Situation Report – On September 9, the Syrian Arab Coalition (SAC) of the Syrian Democratic Forces (SDF) have announced the start of Operation “Storm of Jazzira/ Cizre” or “Jazzira Storm” to liberate eastern Syria and Deir ez-Zor province from ISIS. This offensive was rumored to be under wraps for several months but it became an urgent priority after the Loyalist camp (Syrian Arab Army, Iran and Russia) managed to carve a land bridge through ISIS-held territory and relieve the siege on Deir ez-Zor city, where contingencies of the Syrian forces remained from 2013 surrounded by the jihadists. This page will be updated in accordance with the events unfolding.

There is an extended strategic analysis on the matter here, that includes all the necessary data, details, hypothesis and maps to explain the competitive rush to liberate Deir ez-Zor. It’s about energy security, border control, geopolitical features and counter-terrorism, boiled around the mid-Euphrates river valley.

While the battle hardened and experienced Kurdish militia YPG, as the whole SDF, is concentrating on cleansing Raqqa from the remaining ISIS fighters, the Deir ez-Zor Military Council (DMC) and several local Sunni Arab Tribes (as the Al-Sanaadid Forces) from Hasakhe and Deir ez-Zor will spearhead the offensive.

On the other side, after the Loyalists manged to randezvous with the Syrian Arab Army elements from the provincial capital, they are now heading towards south of mount Tharda and of the airbase.

As of now, the SDF has reached the eastern outskirts of Deir ez-Zor city including the industrial area. The Spokesperson for the US-led Global Coalition against ISIS ‘Inherent Resolve’ said that around 250 km2 were liberated by the SDF along the Khabur river valley.

The race revolves around the strategic question of who liberates the oil-rich region first? The US-backed Syrian Democratic Forces (SDF) or the Syrian Arab Army (SAA) backed by Russian and Iran. 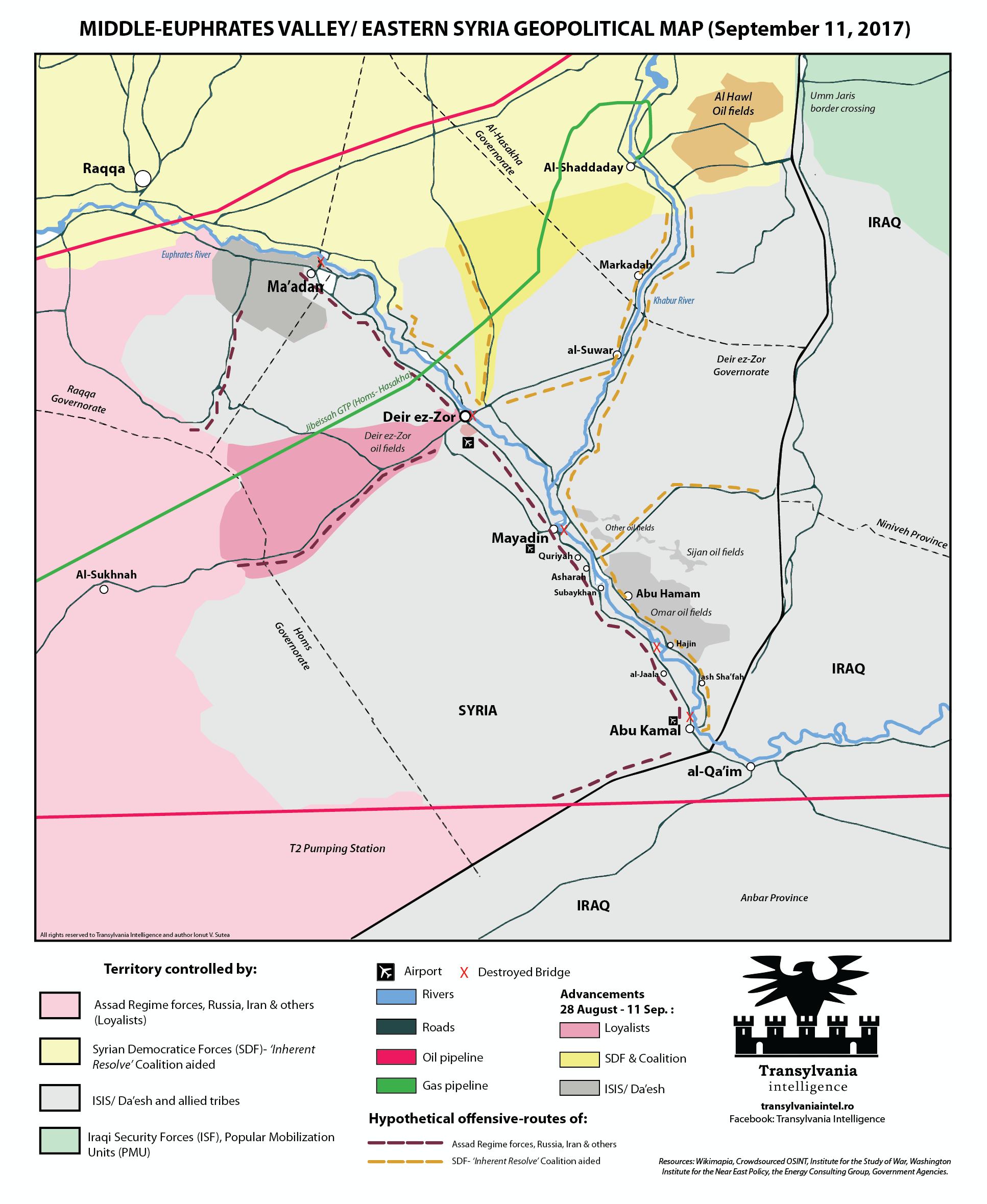 As seen in the map above, the U.S.-backed SDF has come dangerously close to the Russia/Iran backed Syrian Arab Army (SAA). As a consequence on September 16th presumed fighters jets of the Russian Aerospace Forces or of the Syrian Air Force hit the positions of SDF north of Deir ez-Zor City where U.S. Special Operations Forces were also present. Six fighters were wounded in the attack. In order to de-escalate the tensions, the U.S. Coalition announced that there are now intentions for the SDF to enter the provincial capital itself, while the SDF has warned their counterparts not to cross the Euphrates.

Despite efforts to de-escalate the situation through the Qatar-based communication lines, the Loyalist camp did cross the Euphrates using the cover of the air strikes on September 17th. They attempted to cut the SDF’s frontline with ISIS therefore blocking their advance alongside the Euphrates towards the Iraqi border.

Syrian Democratic Forces (SDF) announced that they are ready to drive them back, while maintaining their focus on ISIS.

On September 24th, SDF managed to catch-up with the Loyalist advance down the river valley, capturing the Koniko oil fields and near Kusham, where Loyalist forces attempt to defend the village from surrounding Da’esh fighters. But fearing a by-pass from the SDF, Russian Aerospace Forces acted and bombed the positions of SDF again, casualties have been reported. More information is expected to debut soon. SDF press release confirms that casualties have been inflicted by the air strikes and that they will use legitimate self-defense in response to these attacks, while also urging Russia to maintain focus on ISIS.

Also, US forces in Syria have increased surveillance of Russian troop locations following Moscow’s suggestion that US troops could get caught in Russian military operations.

The establishment of a Civil Council to rule Deir ez-Zor in afiliation to the Syrian Democratic Forces (SDF) and the Federation of Northern Syria is now underway following a meeting with local representatives. The same model has been applied in the major locations liberated by the SDF, such as Manbij, Tabqa and now Raqqa.

While the SDF operation “Cizre/ Jazzira Storm” is spearheaded by endemic, native ethnic, religious and tribal forces, they still need the aid of the battle-hardened and experience core of the organization: the Kurdish YPG militia. Now that the battle in Raqqa is coming to an end (up to 80% of the city is liberated), reinforcements are expected to arrive in Deir ez-Zor in the following two months.

SDF arrived on the outskirts of al-Suwar and have launched operations to liberate the city. However, ISIS managed to pull a successful ambush on one of their convoys leaving several fighters dead. 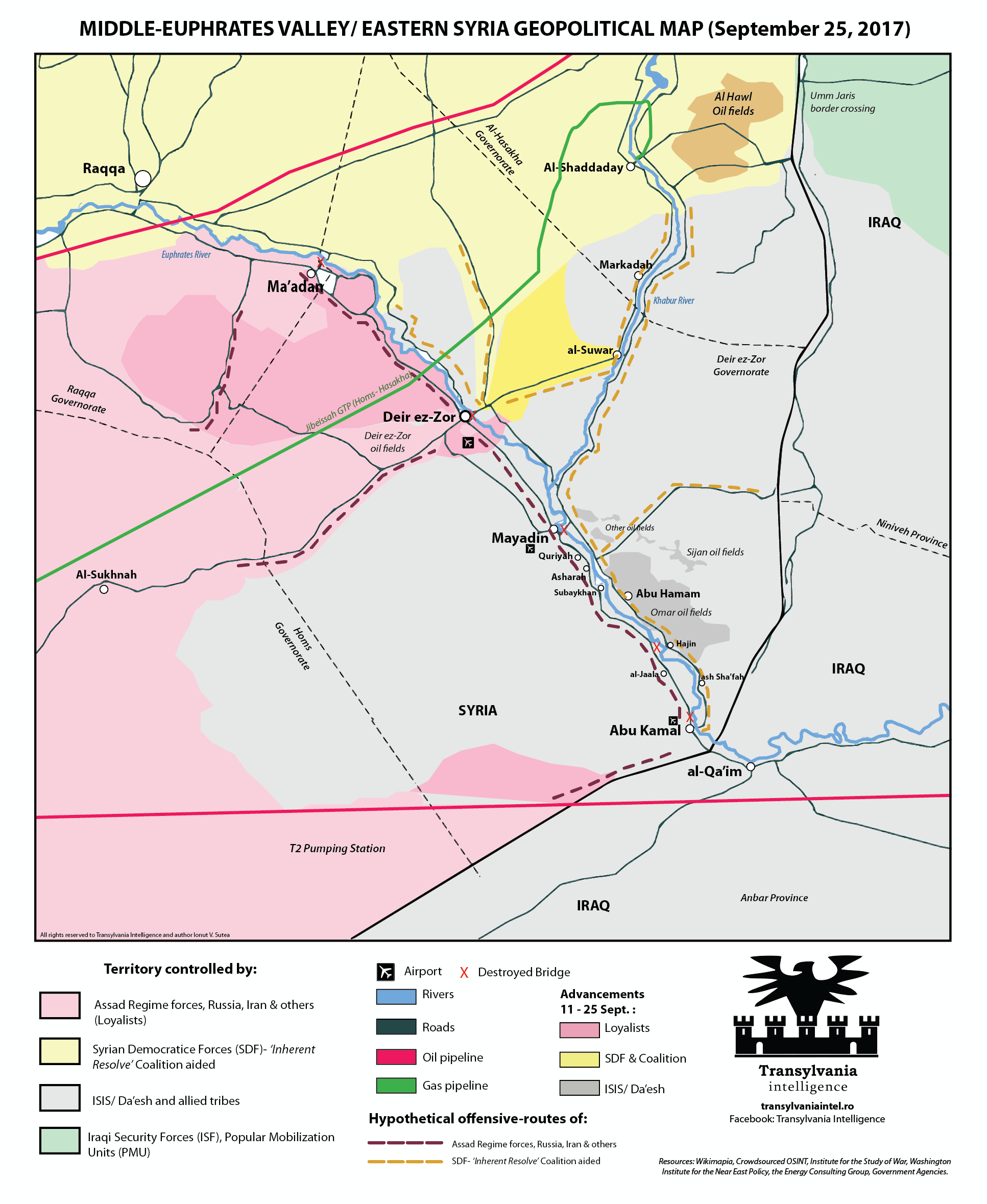 While the Syrian Arab Army and Tiger Forces have not failed to gain more ground on the northern banks of the Euphrates river, they did expand their control consistently south of it. Forces of the Loyalist camp are currently liberating the city of Mayadin, one of the lost small-to-medium strongholds controlled by ISIS in Syria, besides Abu Kamal.

Syrian Democratic Forces (SDF) have managed to liberate As Suwar, but failed to advance more towards the Iraqi border. Moreover, a mobile ISIS counter-attack stormed one of their tent outposts in the desert, inflicting significant casualties, and exposing worrying weaknesses in the SDF outpost system; relatively isolated in the desert.

Today, the Syrian Democratic Forces (SDF) have liberated Syria’s largest oil fields from Da’esh after a surprise frontal offensive in eastern Deir ez-Zor province, the Spokesperson for the US-led Coalition confirmed this development.

The main source of ISIS oil trafficking has been completely cut after in the past year, the jihadists’ entire oil production has fallen from almost 30,000 barrels/day in 2014, to almost zero as of today. Complementary to the Coalition’s efforts to track, identify and disrupt terrorism financing, the closure of Turkey’s border and the gradual loss of oil-vital territories of ISIS, as Kirkuk, Niniveh plains, and now Deir ez-Zor has put the final nail in the terror group’s coffin. Without an economy or a source of revenue, and with fighters in complete disarray, entrapped and suffocated on all fronts, the terror group will be annihilated in the Syrian desert.

The Omar oil fields in Deir ez-Zor province amount to 43% of Syria’s energy deposits, and is also perceived as being a strategic blow to the Bashar al-Assad Regime and the Loyalist camp as a whole. This issue remains to be disputed in the immediate post-ISIS period between the SDF and their political establishment, the self-proclaimed Federation of Northern Syria, and the Assad regime in Damascus. 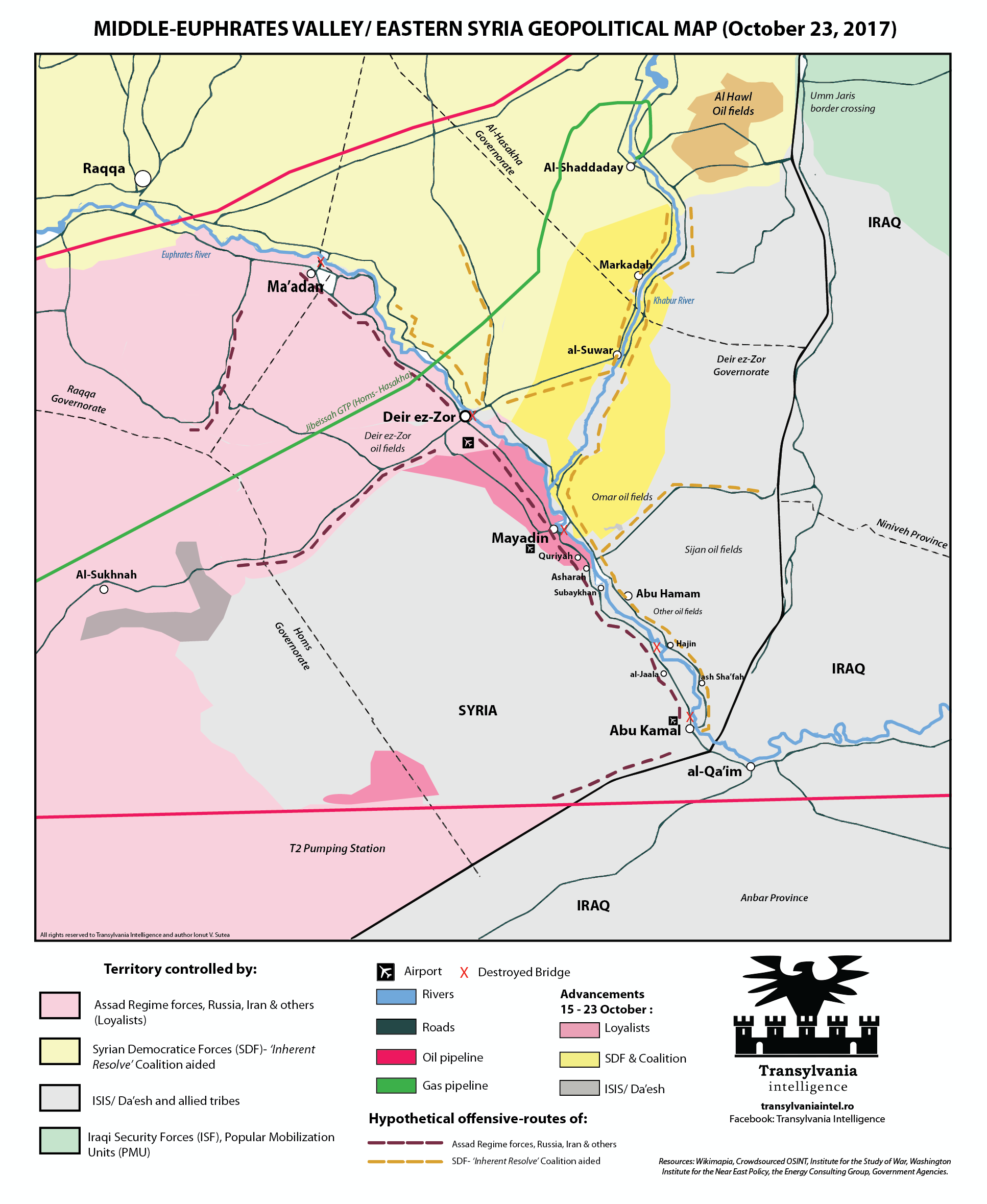 The Syrian Arab Army and its allies from Russia, as well as the Iranian-backed militias are closing on the last cities on the southern banks of mid-Euphrates river valley. After the liberation of Mayadin, the Loyalists captured the small city of Al-Qaryatayn where Da’esh recently executed 128 innocent civilians. One vital, and potentially end-destination on the river valley will be border city of Abu Kamal. Although the Loyalists control small and isolated pockets of land on the northern shores in order to cut the SDF’s frontline with ISIS, and therefore to curb their advancements, that tactic has proven to be unsuccessful. Not only did the SDF managed to keep up with Loyalists movements, but the later was not fast enough to install the long-needed pontoons that would have allowed tanks and technical vehicles to cross the river in decisive locations (as to the Omar oil fields). And as the battle-hardened and experienced Kurdish militia, YPG, concluded its operations in Raqqa, the window of outracing the SDF into defeating ISIS in Deir ez-Zor has closed for the Loyalists.

Something to Fear: Iraqi Feds keep Kurds in line