Evacuation “Shattered Glass”: The US/ Coalition Bases in Syria [Part 1]

HARM
Comments Off on Evacuation “Shattered Glass”: The US/ Coalition Bases in Syria [Part 1]

Disclaimer: This compilation is based on publicly available information collected through open-source intelligence (OSINT) techniques. The release only covers the Coalition/US bases that have been sanitized and evacuated. An exception is the well-known al-Tanf garrison in the 55-km exclusion zone. Positions in eastern Syria, which are still manned by the Coalition, will only be published after the forces have withdrawn. T-Intelligence has been aware –  down to exact grid coordinates – of the location of CJTF-OIR/ US bases in Syria since their construction. However, out of respect for OPSEC and force protection, we have refrained from revealing their locations.

At the apogee of the campaign against ISIS in 2018, around 2,000 CJTF-OIR multinational forces were stationed in Syria, consisting of SOF (special operations forces), SF (special forces), JTAC (joint-terminal attack controllers), logisticians, engineers, airfield support personnel and clandestine servicemembers. Their numbers began to decrease after the defeat of ISIS’ physical caliphate in early 2019 (read more about the battle of Baghuz here). In October 2019, President Donald J. Trump ordered the U.S. troops, which account for the bulk of CJTF-OIR forces in Syria, to leave the country.

What should have been an orderly and gradual withdrawal turned into an emergency evacuation, when Turkey announced a military offensive in northern Syria. Operation “Peace Spring” was a unilateral and poorly coordinated move that threatened CJTF-OIR personnel and bases. U.S. forces were forced to retreat from northern Syria, particularly from Aleppo and Raqqa provinces. The United Kingdom, France and other in-theater CJTF-OIR partners also withdrew their troops. The retreating Coalition forces had no time to dismantle or destroy their bases. As videos would later show, they left behind furniture, personal items, provisions, and occasionally “easter eggs” for the new occupants. Russian soldiers have since taken over the abandoned Coalition bases.

Around 500 CJTF-OIR forces – mainly U.S. troops – continue to operate in eastern Syria, where they are tasked with securing the local energy infrastructure against ISIS resurgents. The forces are stationed in the Mid-Euphrates River Valley and near the Syrian-Iraqi border.

The CJTF-OIR made its operational debut in Syria during the siege of Kobani (northeastern Aleppo province) in 2014. After partnering up with the Kurdish YPG militia and select Arab Sunni groups, the CJTF-OIR liberated the Upper Euphrates Valley and northern Raqqa province, where the Coalition established its first military bases. 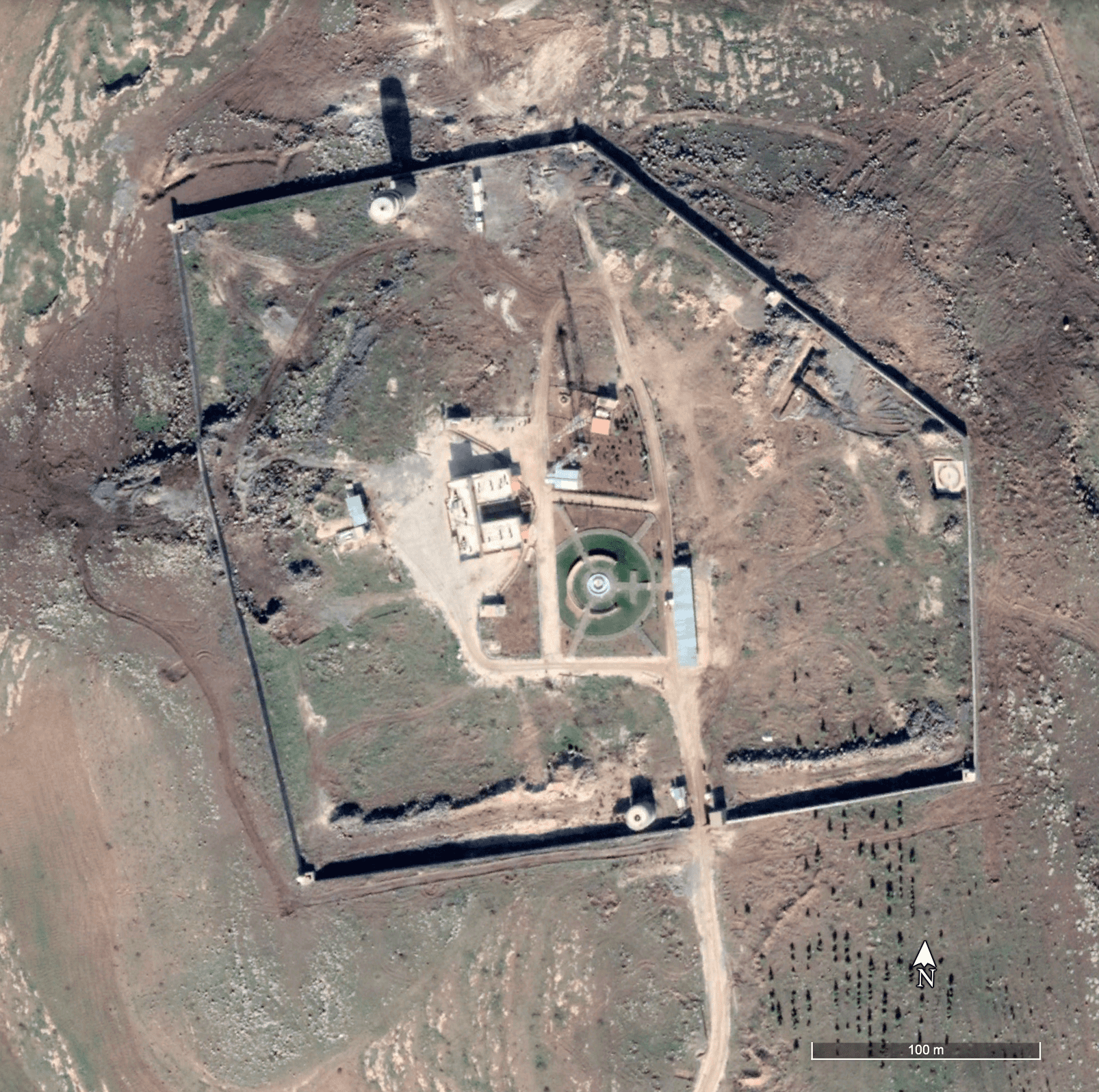 Infrastructure: The FOB was built from scratch next to a radio antenna site in Kobani’s southern hills. CJTF-OIR forces have erected a central two-story building surrounded by several small structures. A tall, thick concrete wall serves as the compound’s external fortification layer. Observation towers overlook the perimeter in all cardinal directions. Unconfirmed information suggests that the FOB started as a joint French-U.S. SOF garrison.

THREAD/ Now that there’s no OPSEC problem, let’s look at the @CJTFOIR / US bases in Aleppo province (Syria). The first construction was an FOB on #Misthenur Hill (Kobani’s southern hills) built sometime between 2014-2015. (geospatial imagery via @planetlabs) pic.twitter.com/AcHJircsJM 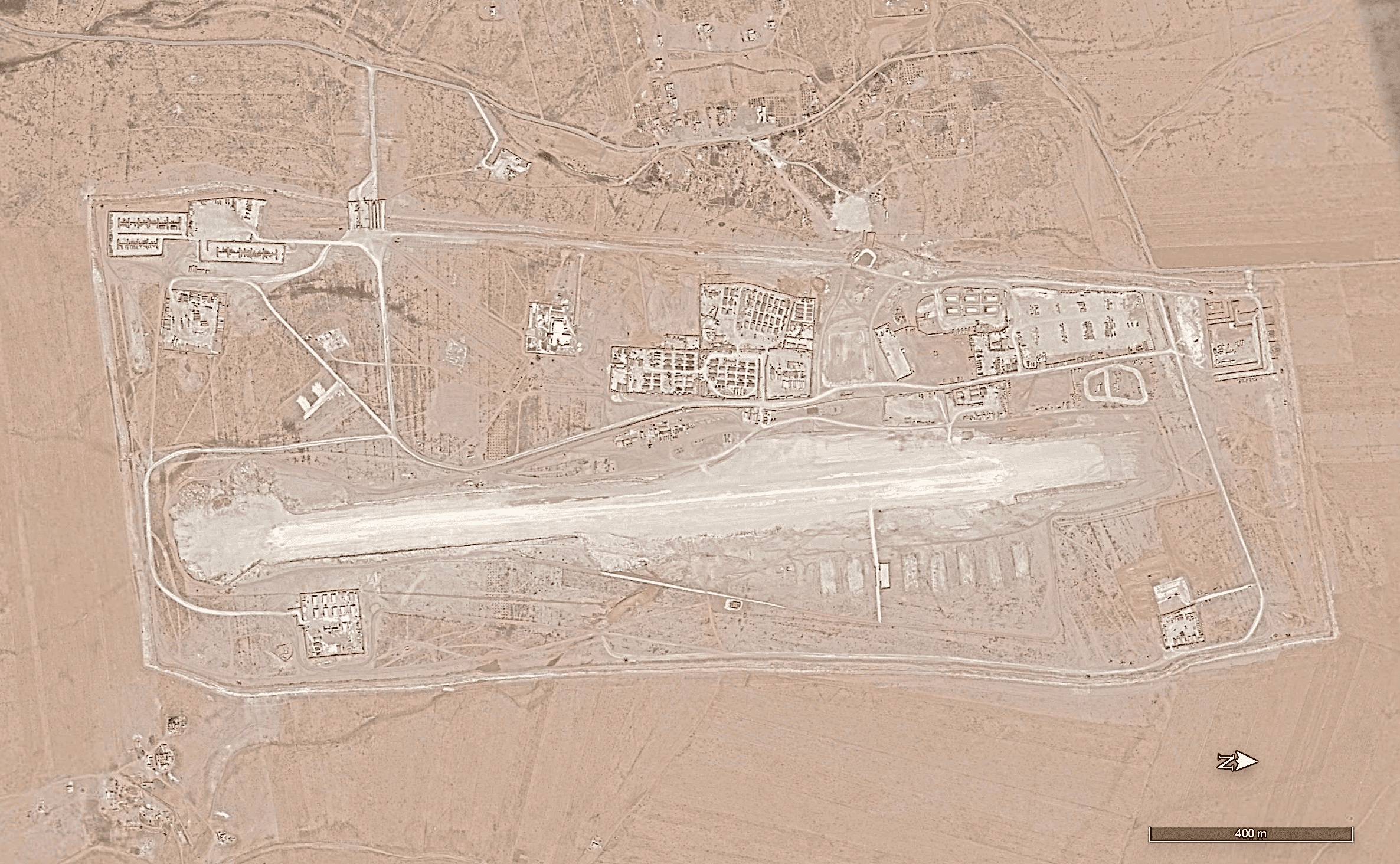 Infrastructure: U.S. Air Force engineers have built the semi-prepared airfield from scratch near the village of Sarrin. The 2,000-meter long dirt runway received America’s largest heavy lifters (C-5 and C-17) that brought the bulk of logistics required for CJTF-OIR’s operations, including vehicles, munnition, construction materials, and other equipment. The U.S. has also built a large campground (more than 50 tents, warehouses, and depots), which provided housing facilities for personnel and logistics. Landing pads, reinforced revetments and a few hangars were added to station rotary-wing aircraft.

After the victory in #Kobani, the Coalition & local partners forces drove ISIS out the Upper Euphrates River Valley and established Kobani Landing Zone (#KLZ), an semi-prepared airfield, near #Sarrin, in 2016. pic.twitter.com/sL8sjjRNIV 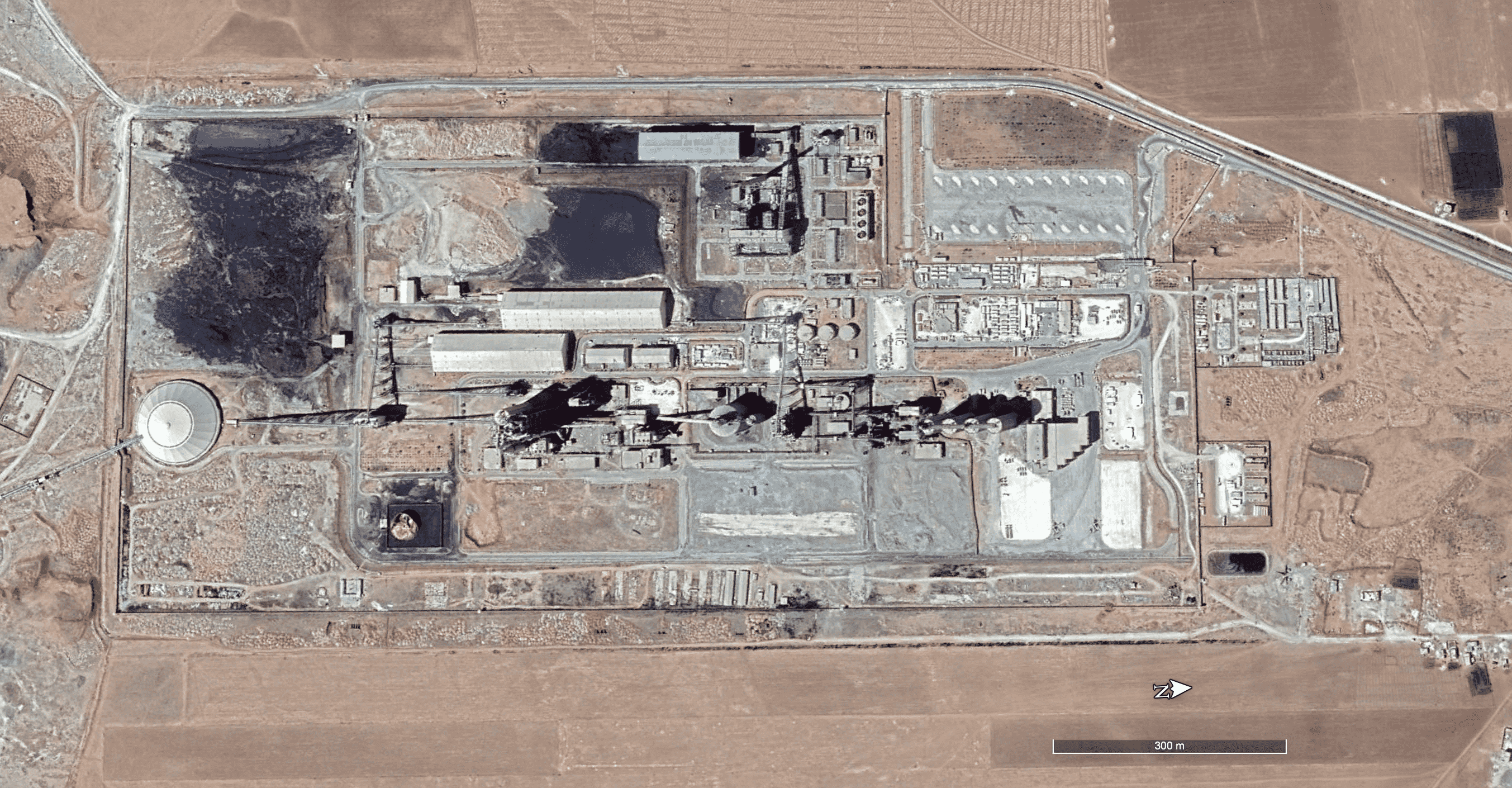 Infrastructure: The cement factory, which was originally built by the French company LaFarge, was repurposed as the CJTF-OIR’s Syrian-headquarters and C2 center. The pre-existing buildings also served as barracks and logistics depot. The site’s large and wide parking facilities were used to store vehicles and helicopters.

Note: The factory survived the war and continued to produce cement under ISIS occupation thanks to the protection taxes that the company paid to local armed groups including ISIS. LFC officials admitted to this practice in 2017, after French prosecutors charged the company’s former CEO with terrorism financing. French officials intervened on behalf of the company to stop the U.S. from bombing the factory in 2014.  The CJTF-OIR evacuated LFC on October 16, 2019, after the Turkish-backed Syrian National Army (SNA) advanced to the M4 highway and came dangerously close to the facility. To sanitize the area and destroy the material left behind, two USAF F-15E jets bombed LFC.

ALEPPO PROVINCE (EAST OF THE EUPHRATES)

Successive victories against ISIS east of the Euphrates allowed the Coalition and the SDF to expand operations in Manbij district, west of the river valley. Due to its large population and proximity to the Turkish border, Manbij was a key city for ISIS. The terrorist group used Manbij to plot attacks on European targets (e.g. Bataclan theater attack) and to receive foreign terrorist fighters transiting through Turkey.

The SDF liberated Manbij in August 2016 with the intention to cleanse the entire area of ISIS. Alarmed by the SDF’s advance towards the Turkish border, Ankara mobilized its assets in the Syrian armed opposition and launched Operation “Euphrates Shield.” The Turkish offensive blocked the SDF’s advance westwards and threatened to capture Manbij. This forced the CJTF-OIR to change its posture in Aleppo province from post-ISIS stabilization operations to deterring a Turkish-backed attack.  To this end, the U.S. installed a multi-layer security perimeter around Manbij city: Two combat outposts (COPs) west and north of Manbij, armed checkpoints, and air-land patrols. Purpose: Post-ISIS stabilization operations,  monitor and de-conflict the M4 highway that links Manbij to Arimah (under Syrian-Russian control) and al-Bab (under Turkish-SNA control).

Infrastructure: The CJTF-OIR has enhanced a pre-existing “T-shaped” compound that encompassed three buildings and two large transmission antenna towers. The Coalition erected around 20 tents and halls in the compound and sectioned the site with multiple sandbag layers. A 300-meter-long driveway with anti-VBIED barriers at both ends links the compound to the motorway. The COP was continuously expanded throughout 2019, until U.S. forces received the order to withdraw.

The first U.S. COP established near the M4 highway to protect the SDF-held Manbij from a Turkish-#FSA assault in late 2017. After the SDF liberated #Manbij form ISIS in August 2016, #Turkey intervened to block and rollback the #SDF‘s expansion. pic.twitter.com/4cJZZFZ3Bn Infrastructure: The COP was built from scratch near the village of Dadat. Within just several months, the camp was visibly consolidated and sectioned in multiple areas with sandbag layers. The living quarters (sleeping tents, chow hall) and operations center in the middle, armory in the second layer, and multiple fortified combat positions were established in all cardinal directions. Annex sites were established south and west of the road. The COP continued to expand throughout 2019, until the evacuation.

The U.S. built a second COP near #Dadat to monitor the #Sajur River Valley and the north-south access points to Manbij from Turkish and FSA (now #SNA) incursions, in Spring 2018. pic.twitter.com/Fn7NVMZbm7

All diplomatic and military efforts (e.g. “Manbij Roadmap”, combined-joint patrols) failed to de-escalate the dispute between Turkey and the U.S. over Manbij. The risk of “blue-on-blue” incidents remained high until the last Coalition forces left the area.

In the aftermath of the withdrawal, the SDF’s Manbij Military Council (MMC) struck a deal with pro-government forces to secure the Manbij pocket. While the city remains under the MMC’s exclusive control, the Russian military police and the Syrian Arab Army are now patrolling the Sajur River Valley and the M4 highway. Negotiations about the fate of Manbij are still underway between Qamishli and Damascus.

The second part will feature the CJTF-OIR installations in Raqqa Province.