HARM
No Comments on Foxhounds Know How to Killjoy: Russian MiG-31s Armed with Kinzhal Missiles Arrive in Syria

Six years after the large-scale operational debut in Syria, Russia continues to pour advanced capabilities and expand its military infrastructure in the war-torn country. Last week, Russia deployed MiG-31K interceptors, Tu-22M3 bombers, and other aircraft for a combined exercise with the Russian Navy in the Eastern Mediterranean. While Russia’s naval-air exercise coincides with British carrier operations in the region, the main question is whether the MiG-31s and Tu-22M3 bombers will make Syria their second home.

FOXHOUNDS KNOW HOW TO KILLJOY

MiG-31Ks are modified to carry the gargantuan Kinzhal air-launched ballistic missile (ALBM). One video released by the Russian Defense Ministry shows a MiG-31K taking off from Khmeimim AB armed with a Kinzhal on its centerline pylon, confirming the missile’s presence in Syria. 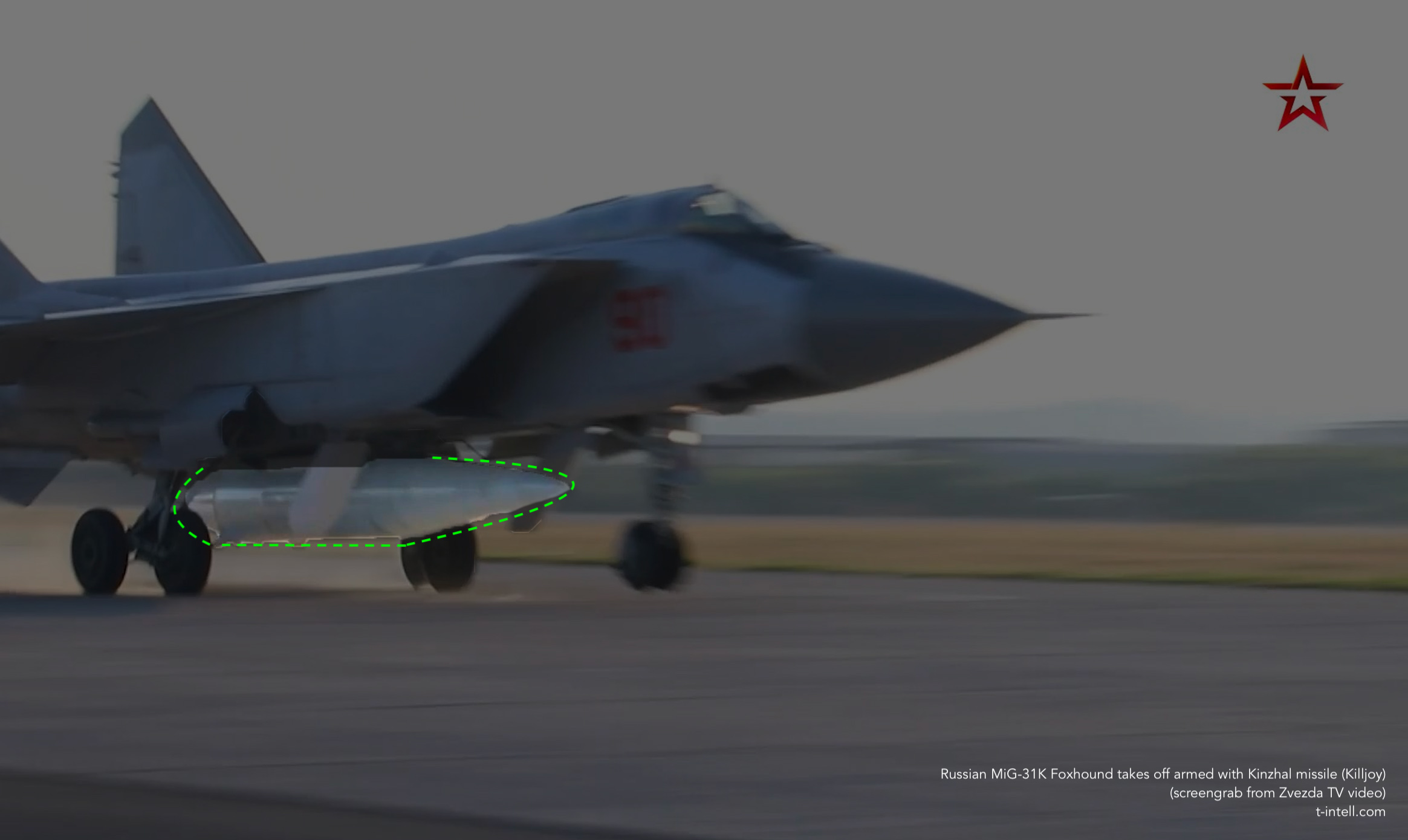 The Kinzhal ALBM missile (Killjoy*) is one of the six “invincible” strategic weapons Russian President Vladimir Putin unveiled in 2018. Russian officials allege that the Kinzhal can sustain speeds over Mach 10 and strike targets 1,200 km away.

For both the MiG-31s and Kinzhal missiles, the trip to Syria marks their first foreign deployment.

Three Tu-22M3 (Backfire-C) long-range bombers, a Tu-142MK (Bear-F), and an Il-38 (May) maritime patrol and submarine-hunting aircraft have joined the pair of MiG-31s in Syria.

The Tu-22M3 bombers first appeared a month ago and are now on their second visit to Latakia. Videos released by Zvezda TV show the Backfire bombers taxiing on the runway armed with Kh-22 anti-ship cruise missiles (AS-4 Kitchen). The anti-ship ordnance is in line with the supposed purpose of this deployment, the upcoming Russian air-naval drills in the Eastern Mediterranean.

Two frigates (Admiral Essen and Admiral Makarov), two submarines (Stary Oskol and Rostov-on-Don), and the Moskva missile cruiser will also partake in the joint air-naval exercise off the Syrian coast. Russian officials describe the drills as “combat training tasks to ensure the security of the Khmeimim airbase and the logistics center of the Russian Navy Tartus.” 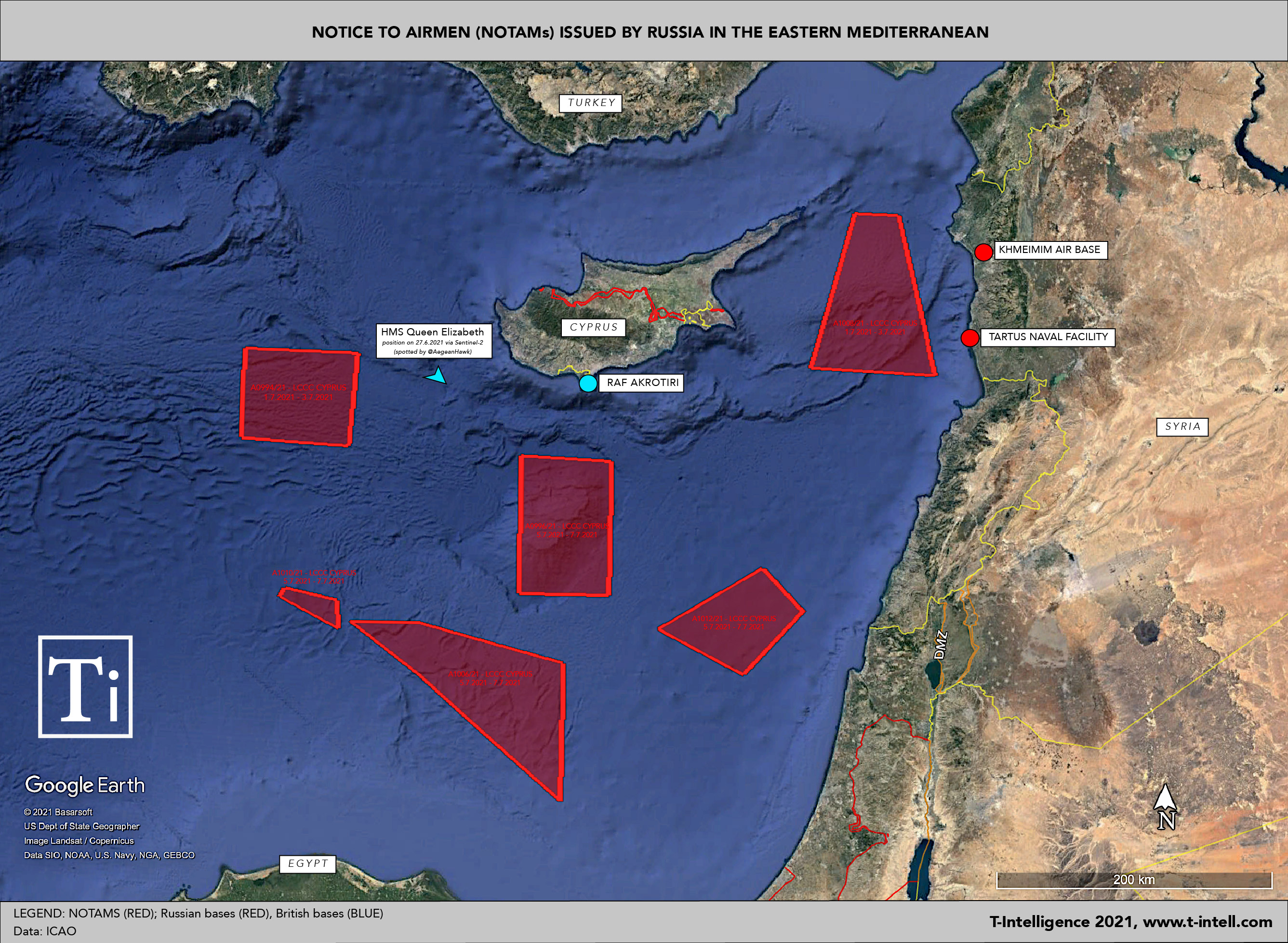 Even though Moscow has likely planned the exercise in advance, Russia suggests that the maneuvers respond to the HMS Queen Elizabeth. The Russian military may have expanded the scope of the training after learning about the British carrier group’s visit (e.g., redeployment of bombers back to Khmeimim AB, as the War Zone first suggested).

At the time of the writing, HMS Queen Elizabeth is operating off the Cypriot coast. With the Russian exercises underway, some interaction has already taken place between the two adversaries. RuAF aircraft used the British carrier as mock target practice, while a RAF F-35B armed with anti-ship missiles buzzed the Russian frigate Admiral Makarov.

While Russia’s naval-air exercise coincides and is potentially linked with the British carrier operations in the region, the main question is whether the MiG-31s and Tu-2MM3 bombers will make Syria their second home.

In late 2020, the War Zone broke the news that Russia is expanding the runway at Khmeimim air base, “which could help accommodate heavy airlifters carrying more cargo or other large aircraft, including possibly bombers.” The War Zone’s assessment proved to be true. Backfire bombers have visited Khmeimim AB twice in one month. The runway extensions also allow for Foxhounds to operate from the air base.

Using Sentinel 2 imagery we can see that the first clear signs of runway works appeared in July 2020. The construction advanced slowly throughout the year with another major change being visible in late 2020. The runway extensions seem to have only been finalized in early summer 2021.

As the screenshots bellow show, Russia extended the runway’s northern end by approximately 170 meters and southern end by 130 meters.

Armed with the notorious Kinzhal missile, the MiG-31 can also be a potent ship-killer, including against carriers, and a prompt nuclear delivery platform covering NATO’s southeastern flank.

REVIVING THE MIG-31 SALE TO SYRIA?

One low-probability, high-impact scenario worth considering is that Russia could use the MiG-31 deployment to revive the Syrian regime’s interest in the aircraft.

In 2007, the Russian press announced that Moscow planned to sell five MiG-31Es to the Syrian Arab Air Force. Iran was reportedly financing the purchase as a back-door deal. However, in 2009 the deal fell through, reportedly due to a Russian-Israeli quid pro quo arrangement. Israel was to provide UAV technology in exchange for Moscow halting the MiG-31 sale to Syria.

It is no secret that Moscow has instrumentalized its intervention in Syria to advertise its military equipment. While the Syrian regime’s economy is in disarray and the SyAAF can barely service the existing fleet, Moscow could provide financial assistance in the form of credit. If Moscow and Damascus are serious about rebuilding the Syrian military, a MiG-31 interceptor could be the way forward to deter Israeli air raids and allow the SyAAF to police its airspace.

The reason for the Backfire deployment is more straightforward. Like MiG-31s, Backfires are nuclear-capable. In addition, Backfires can carry an assortment of ship-killing missiles. Their primary role will likely be air strikes against Syrian opposition groups. With a payload of 24,000 kg, Backfires can rain down dozens of bombs within one run, increasing Russia’s operational efficiency. In contrast, the RuAF has relied on Su-34 and Su-24 fighter-bombers (both have 8,000 kg payload), or even multirole aircraft, to deliver air-to-ground attacks.

It is increasingly likely that Foxhounds and Backfires will make regular guest appearances in the Syrian theater and possibly make Khmeimim AB their second home.

*Thanks to a 2020 Norwegian Intelligence report quoted by the Barents Observer, we know that the AFIC/NATO codename for Kinzhal is “Killjoy.”

"Do Not Enter:" Using OSINT to Monitor Russia's Wargames in the Black Sea