HARM
No Comments on Starve, Surrender or Die: Eastern Damascus to Collapse

Urgent Briefing (4 min read) – A small pocket of land in eastern Damascus (also known as “Eastern Ghouta” is now the scene of the newest humanitarian catastrophy and intense military assault in Syria. In mid-February, Iranian and Russian-backed Syrian governmental troops have moved armed divisions and infantrymen from Idlib province to the exclave of Eastern Ghouta, near the capital. The scope of the military deployments is confirmed by remot sensing and social-media imagery. The build-up suggests that a renewed offensive is imminent.

According to the United Nation, a score of  94 deaths (40 civilians) and 150 injured has been inflicted by Russian Aerospace Forces and the Syrian Arab Army (SAA). The Syrian Arab Air Force (SyAAF) has largely used its remaining helicopter fleet to drop cluster ammunition on the densely populated area.

Airstrike persisted throughout 20-21 February. Casualties spiked to 310 people killed and over 1,500 injured – many of them civilians. Thermobaric ordinance was also seen to be parachuted by pro-governmental air raids in the adiacent neighborhoods. Most of the attacks took place at night, and included artillery shelling. Opposition forces responded with surface-to-surface rounds in governmental-held position in Damascus that also made civilian casualties.

The increased shelling and air campaign is just a preparatory phase of a yet-to-come ground incursion, taking after the Aleppo example (the largest humanitarian disaster throughout this war). This was also suggest by Russian Foreign Ministry Sergey Lavrov. 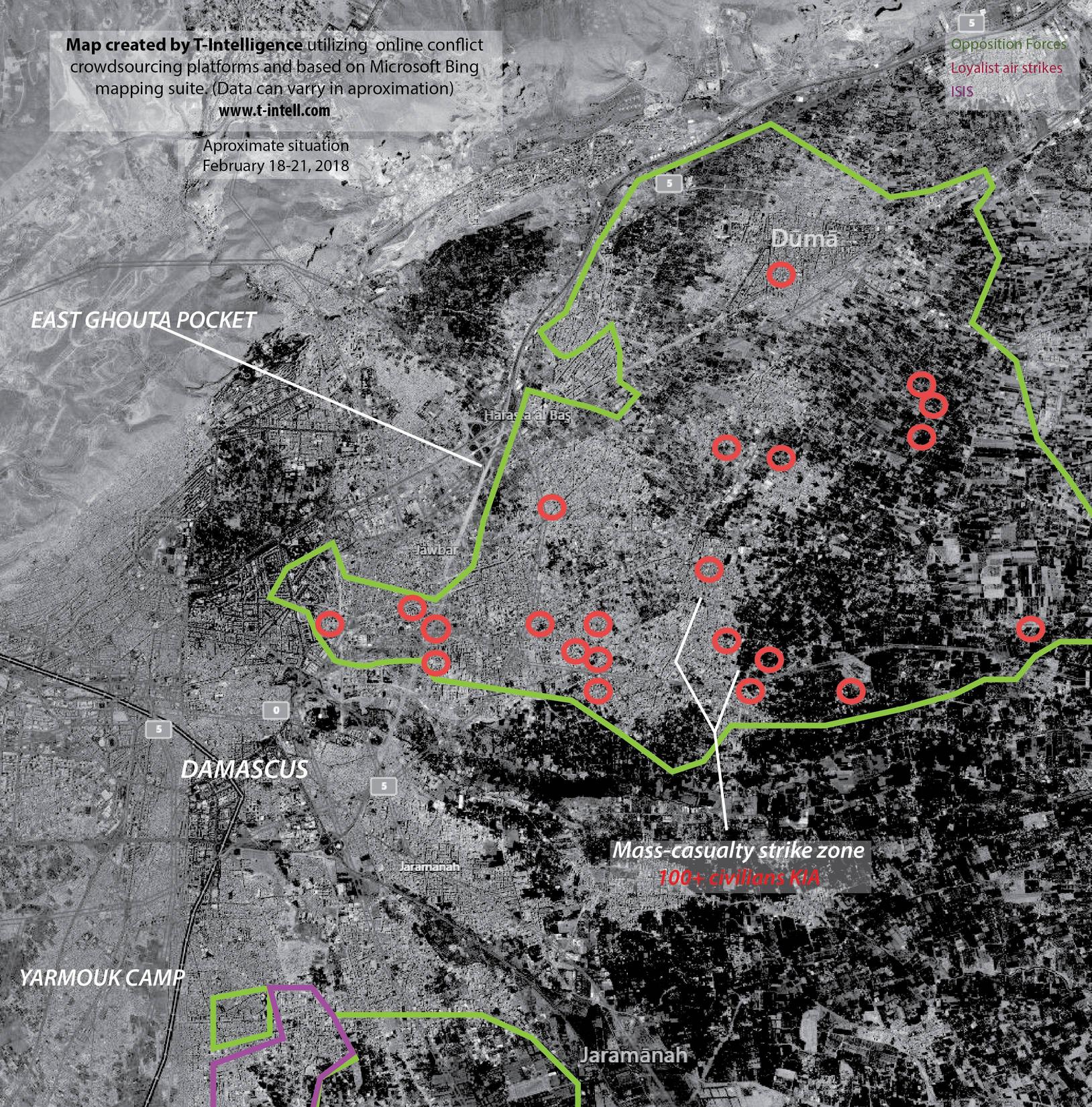 Controlled by Opposition Forces since 2013, Eastern Ghouta is a densely populated agricultural district on the outskirts of Damascus – together with quarters of Yarmouk camp, this is the last major area near the capital still under Rebel dominance. Home to 400,000 people, the region has been inherently under tight attrition and siege.

The forces that dominate the area are equally controversial to the ruthless air campaign of their enemies. Dominance in the pocket is split between Ahrar ash-Sham, the Saudi-backed Jaysh al-Islam and al-Rahman Legion. The later allied with al-Qa’ida affiliate, Hay’at Tahrri al-Sham (HTS) in early 2017 to combat the former two, that we’re plotting to oust the jihadists. Fights broke out in the Summer of 2017 but quickly came to an end following an intra-Rebel ceasefire seeking to mutually-respect the areas of influence and subsequent checkpoints. However, while some more extreme than others, the majority of these groups are largely Islamist with profound puritarian feelings, and even Salafist traits that also view Western interests with hostility.

Jaysh al-Islam is dominating the largest piece of the pocket : Stretching from Douma in the north to the south-eastern corner of Nashabiyeh. Ahrar ash-Sham controls a small corner in the north-west encompassing Harasta, while Failaq al-Raham holds the remaining south-west. Movement between the three areas is also highly difficult due to the polarized and volatile tensions between the factions involved – this being also consequential to the hardened lives of the local inhabitants, periodically resulting in deaths and injuries.

The renewed Loyalist offensive of February 2018, is a direct violation of the ceasefire struck between Russia and Opposition forces in August 18th, 2017 in Geneva. To be fair, the truce was fragile to begin with – governmental pressure was enhanced immediately after its signing. Shelling and air rads re-occurred in September and October 2017, and we’re continued by an intensified attrition that suffocated the almost 400,000 people that inhabit the area. The “starve-and-surrender” tactics, so commonly used by the Loyalists through the conflict, have brought the pocket into a horrific state.

Besieged from 2013, the population of Eastern Ghouta always had limited access to supplies. Now, that window is fully closed. In the early years of the war, many people were able to obtain essential supplies via informal dealing networks passing through tunnels connecting Eastern Ghouta with governmental-controlled districts in the vicinity. Many of those traders bribed Syrian soldiers to grant them passageway. 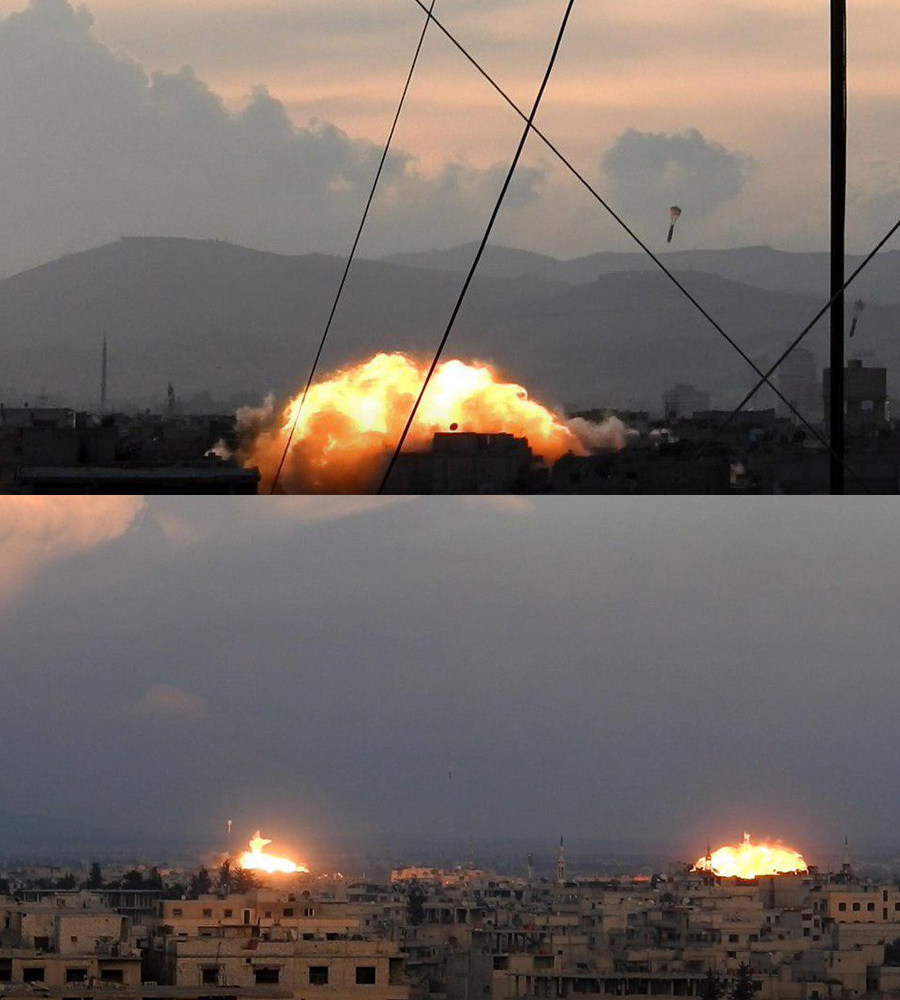 Last year, the government closed the tunnels and limited trade. From September to November (when shelling and airstrike re-commenced regardless of the cease-fire), no commercial vehicles were permitted to enter the pocket at all. Limited deliveries resumed in December, but those we’re quickly ceased again.

That led to the exhaustion of food supplied, dramatic price inflation, and deaths resulting from starvation. And with dealers unable to move outside the pocket, the last avenue of basic goods as sugar, flour and rice was cut-off.

Today, a bundle of bread costs close to 22 times the national average, according to U.N. Inherently, malnutrition rates have reached unprecedented level, with 11.9% of children under five years old acutely malnourished. The last convoy to enter Eastern Ghouta was on February 14, and only delivered care packages enough for 7,200 of the 394,000 inhabitants besieged there. This was the sole supply-run in over two months.

Furthermore, medical and emergency services are close to seize operating at all. Only since Sunday, when the Loyalist offensive re-commenced, 14 medical facilities have been taken out of service, according to Dr. Ahmad Dbis of the Union of Medical Care and Relief Organizations (UOSSM), which operates hospital there. Over 10 medical staff and volunteers have also been killed, while 20 were injured by the recent campaign.

No end in sight

The situation will continue to degrade. The Russian military said that talks to peacefully resolve the situation in Eastern Ghouta had broken down and that Rebels there had ignored calls to cease resistance and lay down their arms. Opposition forces are accusing their opponents of forbidding humanitarian aid and food to enter the enclave, subsquentley using it as a negotiating leverage to re-shape a better deal that the already agreed de-escalation cease-fire signed in 2017. While local Opposition forces have not driven out AQ-affiliated elements from the pocket – which is a must. The dramatic humanitarian situation is the work of both parties involved in the war, but the malign presence of Salafists in the area and the Russian response to it are only making things worst.

The United Nations has denounced the bombardment, which has struck hospitals and other civilian infrastructure, saying such attacks could be war crimes. The international arena continues to pressure Moscow, Tehran and Damascus with little chance of success. Ground elements continue to take positions on the northern and eastern axis around the pocket, while artillery rounds pound Rebel positions.

Parallel talks between Russia, Syria and Egypt are also reportedly taking place. Akhbar newspaper reports that the Egyptians are pressuring Jaysh al-Islam to push out HTS-affiliated groups (Rahman) out of the pocket.

Possible developments are the following (but not limited to):

The Syria Strikes: Forecast Reflection and Damage Report of the Joint Air and Naval Operations