IRGC-Quds Force Commander, General Qasim Soleimani, and Kata’ib Hizbollah (KH) Commander/PMU Deputy Chairman, Abu Mahdi al-Muhandis, were killed in a US airstrike in Baghdad International Airport. The targets are confirmed killed by all sources. Soleimani and his associates were planning to attack and kidnap American diplomats in Iraq.

This is the biggest targeted killing operation since the death of Bin Laden. As the commander of the IRGC’s external operations branch, Qasim Soleimani was in charge of exporting the Khomenist revolution and IRGC model for two decades. He did this by founding, arming and training Shiite fundamentalist militias – including terrorist organisations – in Lebanon, Syria, Iraq and Yemen. Qasim Soleimani and his Iraqi partners are responsible for thousands of American and Coalition deaths since the start of the Iraqi War.

With Soleimani coordinating all of Iran’s extra-territorial operations and overseeing the Syrian battlefield, his death will have a major impact, at least in the short-term, for the IRGC. Plans, drafted by Soleimani himself, nevertheless remain that call for the destruction of Israel and for the removal of US forces from Iraq. Washington and Jerusalem could have killed Soleimani many times before, but refrained from “pulling the trigger” out of fear of retaliation. However, in light of the recent attacks on international shipping, Coalition bases and on the US embassy, the gloves were off.

We can confirm with a high degree of confidence that the kinetic package that killed Qasim Soleimani and Abu Mahdi al-Muhandis consisted of four AGM-144 “Hellfire” air-to-ground missiles. Since the blast area was determined to be a target-rich environment, the strike platforms fired standard Hellfire missiles that had explosive warheads – ensuring maximum effect – and not the secretive (CIA-exclusive) AGM-144X9 “Flying Ginshu” with pop-blades – lately featured in air raids against al-Qa’ida militants in Idlib. The missiles were fired by a MQ-9 “Reaper” UCAV and/or AH-64 Apache attack helicopter participating in the operation. Besides Soleimani and Muhandis, the kinetic strike killed three Hizbollah and PMU militants. The operation was overseen by the Joint Special Operations Command (JSOC).

Minutes before the strike, Qasim Soleimani and three Hizbollah militants flew from Damascus to Baghdad on board ChamWings flight 6Q501. They landed between 12.30 and 12.40 (local time) at Baghdad Airport. From touchdown, JSOC had a very short strike window to bomb the two-vehicle motorcade brought by al-Muhandis to greet Soleimani, without damaging the airport or losing them in Baghdad’s civilian-dense traffic.

RISK OF WAR is increasingly high.

An ARMED ASSAULT on the US Embassy in Baghdad remains possible, but very difficult, given the influx of US forces in the region.

TERRORIST AND ASYMMETRIC ATTACKS in Iraq or abroad, including suicide attacks and kidnappings, are very likely.

The Israeli Air Force (IAF) conducted an night-time raid against IRGC-Quds and Syrian military targets in southern Syria on November 20. The IAF raid was retaliation for the ineffective rocket…

The Israeli Air Force (IAF) conducted an night-time raid against IRGC-Quds and Syrian military targets in southern Syria on November 20. The IAF raid was retaliation for the ineffective rocket salvo fired in the previous day from Syria into northern Israel. The IAF likely used its “trademark” attack corridor through Lebanese airspace to fire cruise missiles from stand-off range.

IDF Spokesman Brig.-Gen. Hidai Zilberman revealed the tens of targets were struck in Damascus, west of Damascus and the Syrian Golan Heights overnight, belonging both to the regime of Bashar Assad and the IRGC’s external branch, the Quds Force. According to the British-based Syrian Observatory for Human Rights, 23 people, including 16 non-Syrians, most likely Iranians, were killed in the Israeli airstrikes. Given the high-number of IRGC casualties and magnitude of the attack, Iran is expected to retaliate militarily against Israel.

The P-BDA sourced by the Israeli geospatial company ImageSatIntel shows that the IAF targeted key position in Damascus International Airport and Mezzeh airfield. This was the first time since the IAF’s covert air campaign commence seven years ago, that the IRGC’s Command & Control (C2) center in Syria was attacked. While the “Glasshouse” is still standing, its northeastern corner was leveled by a precision airstrike.

Thread – 2/4: The #Iran|ian #QudsForce HQ in #Damascus intl. airport, AKA the #Glasshouse. Before and after #Today‘s airstrike.#IMINT #ISI #satellite #intelligence #space pic.twitter.com/NZIS2THn4L

The five floor monolith building was used since the early years of the Syrian Civil War by IRGC officers – namely from Quds Force – to command and control assets, coordinate intelligence collection activities and direct military operations. However, we assess that Tehran re-deployed most of its departments and senior commanders to other, more secure locations in Syria as the “Glasshouse” became increasingly known to international press, foreign intelligence and OSINT collectors.

As seen countless times before, the Syrian Arab Air Force (SyAAF) was unable to prevent or impede the Israeli missiles from reaching their targets.

Yesterday night, an air attack destroyed an Iranian logistics node near Abu Kamal (Syria). The likely culprit behind the attack is the Israeli Air Force (IAF), since Jerusalem has recently…

Yesterday night, an air attack destroyed an Iranian logistics node near Abu Kamal (Syria). The likely culprit behind the attack is the Israeli Air Force (IAF), since Jerusalem has recently expanded air operations to Syria’s border region and even Iraq. The strike was allegedly conducted by F-35Is “Adir” (Israeli-modified F-35As). The Iranian logistical support operations hub in Abu Kamal had been established earlier this year.

The Israeli geospatial company ImageSatIntel (iSi) recently released a battle damage assessment of an earlier IAF raid on the same facility, which took place on September 8, 2019. The analysis accounted for a total of eight storehouses that were completely destroyed. The structures were part of a wider military base, codenamed “Imam Ali” compound, which has been built and financed by the Iranain Revolutionary Guards Corps-Quds Force for the purpose of weapons storage. The logistics node likely hosted missiles, small weapons, rocket launchers, and ammunition smuggled to Syria from Iran and Iraq.

The attacked storehouses are located in a military base (#Iranian, according #FoxNews), 5 km West of the Syria-Iraq border of #Albumamal–#AlQaim. The mentioned border is still closed, but it seems to be ready to be #operarional soon. pic.twitter.com/KkDNrHFfxT

Abu Kamal is located on a strategic border crossing between Syria and Iraq. Iranian-backed forces seized the area from ISIS in mid 2017. For Iran, control over the Abu Kamal area is key to solidify the “Shia Crescent” line of communication that links the Iranian homeland to Syria and Lebanon via Iraq. This “land bridge” diversifies Iran’s logistics routes, as the IAF continues to prosecute Iranian air transports to Syrian airfields. 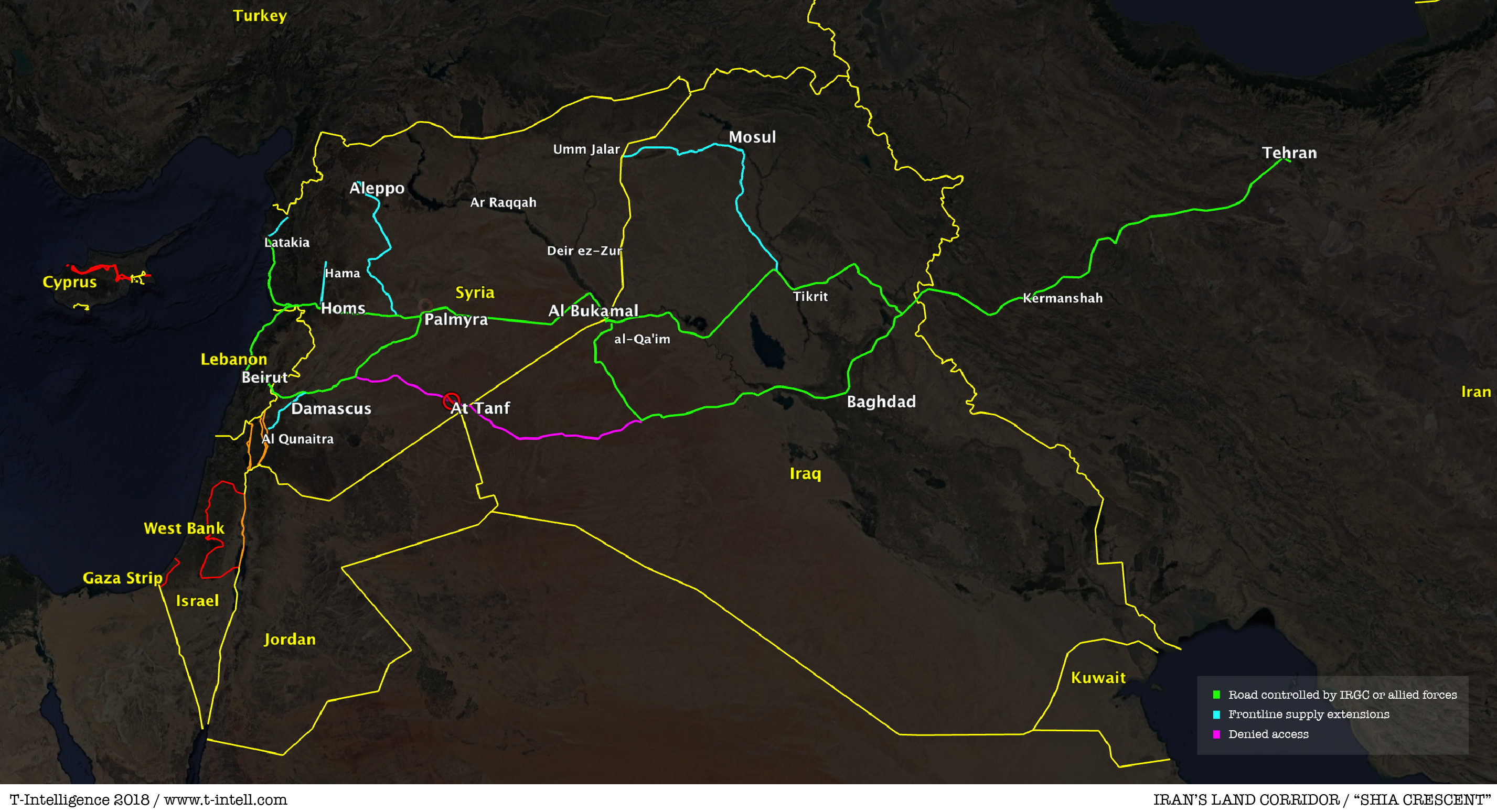 Cover photo: The F-35 Integrated Test Force is completing a series of night flights, testing the ability to fly the jet safely in instrument meteorological conditions where the pilot has no external visibility references. The ITF, which has the lead on all F-35 mission systems testing, is responsible for five of the six night flights. (Courtesy photo) 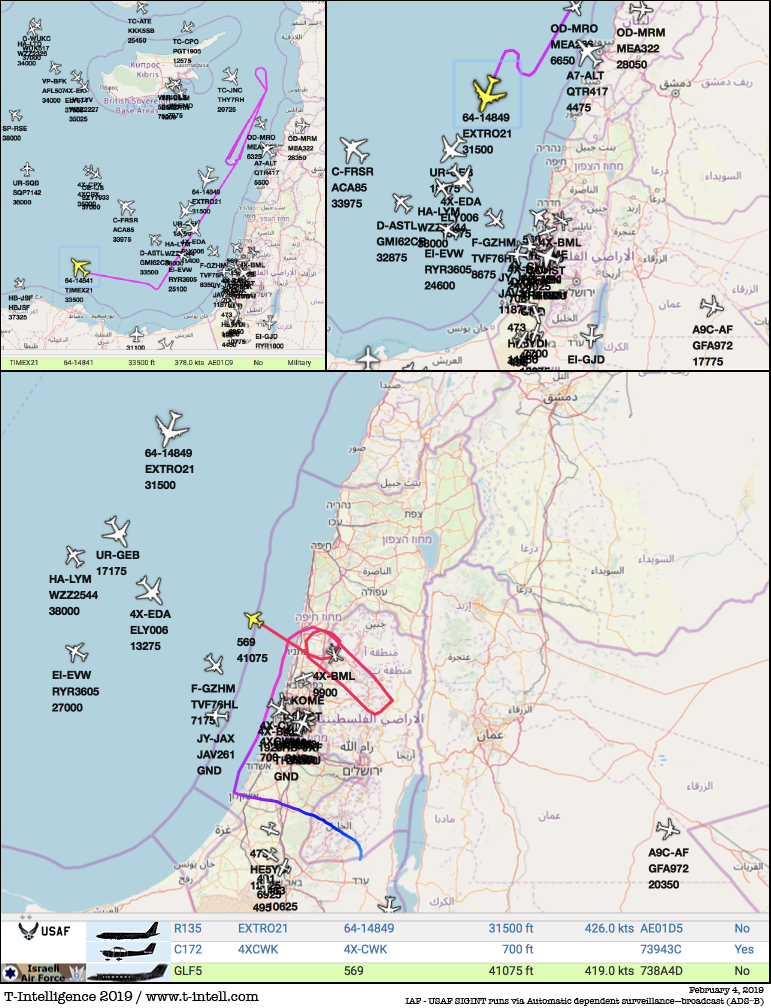 2. The SIGINT platforms likely attempted to intercept communications between Syrian military and air control units to determine whether the cargo plane is a high-value target (HVT) that carries heavy weapons such as ballistic missiles (BM) destined for Iranian-affiliated paramilitary units. Should the presence of a HVT be confirmed, the IAF will likely conduct a tactical air strike to destroy the package. Both SIGINT collection sorties and air strikes have become common practices, as the IAF is attempting to curb the Iranian entrancement in Syria. Most of the Iranian military cargo eventually ends up in the hands of militias that operate against Israel, such as the Lebanese Hezbollah or the Palestinian Islamic Jihad Organization.

3. Syrian Air flight RB/SYR9824 (registration YK-ATB) left THR at 8:43 AM (UTC) westbound with no destination listed. When approaching the Syrian-Iraqi border around 10:12 AM, the flight turned its AVB transponder off. Twenty minutes later, the flight re-apparead over Homs province, Syria. Around 10:35 AM, the aircraft went dark again, while dropping to an altitude of 6,800 meters. As the aircraft made a northern course correction, the flight path of RB/SYR9824 suggests a destination north of Damascus. Whether this is indeed true or just a counter-surveillance maneuver to deceive its U.S. and Israeli watchers, is unknown. 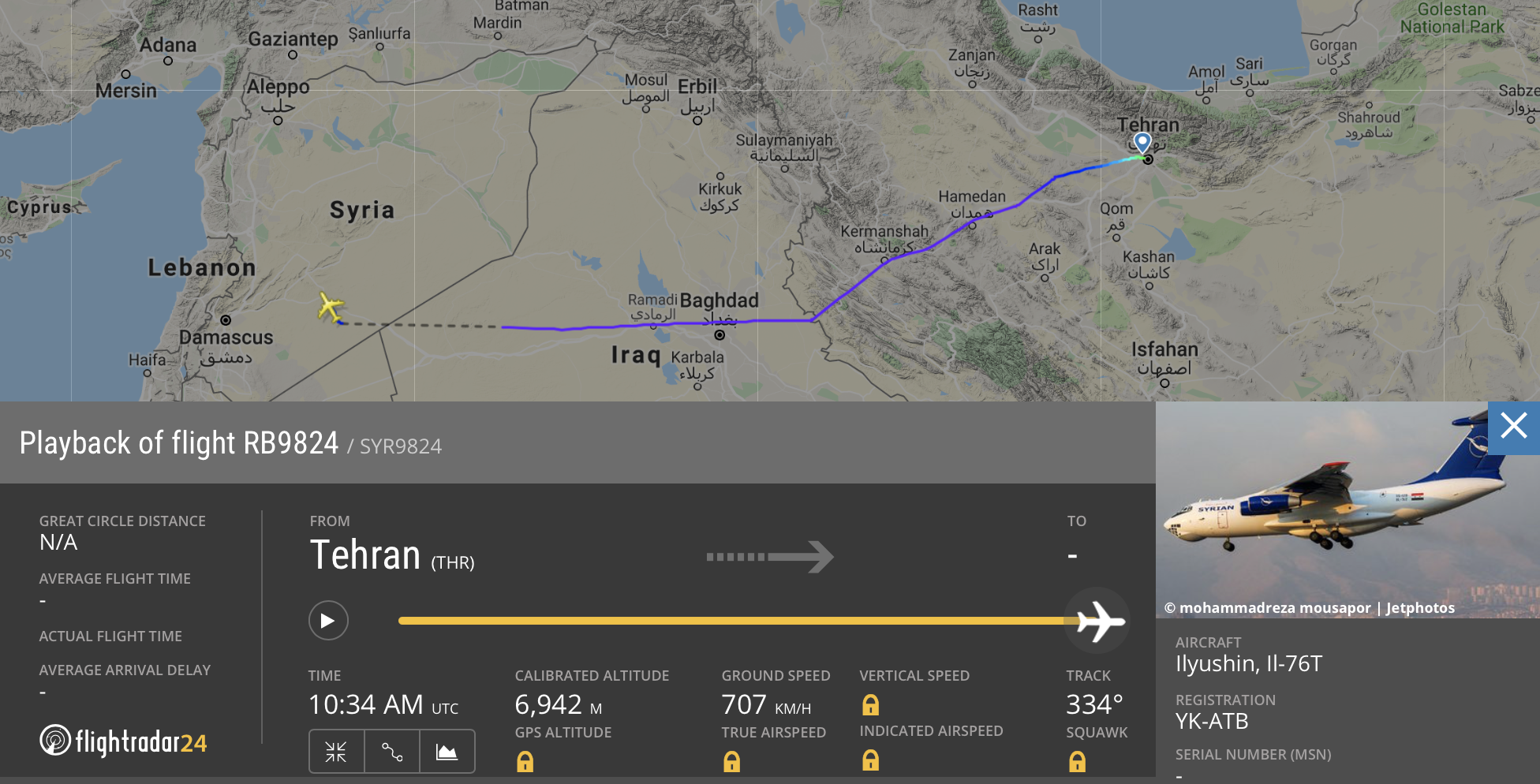 Flightpath of RB/SYR9824 via FlightRadar24

5. In conjunction with its land-corridor, the Iranian Revolutionary Guards Corps (IRGC) also operates an air route to supply its external branch, the al-Quds forces (IRGC- Quds), and affiliated Shi’a militias operating in Syria. Common destinations for the flights from Tehran and Kermanshah are the main Damascus airports (International and Mezzeh), Basil Al-Assad Airport in Latakia province and other airfields in Hama and Aleppo. Besides the civilian companies Mahan Air, Syrian Air and Fars Air Qeshm, Iran  is also known to use military aircraft operated by the Iranian Air Force (IRIAF) and the Syrian Arab Air Force (SyAAF).

6. The presence of IAF/USAF SIGINT platforms does not automatically indicated that a HVT is onboard and that an Israeli air strike will follow. The IAF is tracking all suspicious flights inbound for Syria and Lebanon, many of which do not carry HVT cargo or whose payload does not mandate immediate kinetic action. The IAF/USAF SIGINT collections efforts could also be related to rumors indicating an imminent operationalization of the SyAAF’s S-300PM2 (SA-20B Gargoyle) surface to air missile system.