A Russian missile attack on Kramatorsk train station in eastern Ukraine has killed at least 50 people, likely only civilians, and wounded 100 others, on 8 April 2022. Kramatorsk hosts…

A Russian missile attack on Kramatorsk train station in eastern Ukraine has killed at least 50 people, likely only civilians, and wounded 100 others, on 8 April 2022. Kramatorsk hosts the headquarters of the Joint Force Operations (JFO), which is the Ukrainian military effort to counter the Russian occupation of Donetsk and Luhansk. After the Kremlin downsized its war aims, the JFO is bracing for a supercharged Russian offensive in eastern Ukraine.

I. Russian forces used the Tochka-U short-range ballistic missile (SRBM), our analysis of the missile wreckage concludes. Russia still has some Tochka-Us in service despite claims to the contrary. Tochkas were filmed re-deploying from southern Belarus as early as 30 March 2022. In addition, Russia likely has a vast stockpile of combat-worthy Tochkas in reserve.

II. Russia has announced that it attacked several railways nodes in eastern Ukraine on 8 April 2022, including Slavyantsk, but refused to claim the Kramatorsk missile strike. Instead, the Kremlin is pushing a false-flag disinformation campaign to shift the blame on Kyiv.

III. The targeting of civilians might have been the sole objective of Russia’s missile strike, considering that the Kramatorsk train station is a well-known evacuation site. Violence against the enemy’s civilian population is a hallmark of Russian urban warfare.

1. Missile debris photographed near Kramatorsk train station is consistent with the booster section of a 9K79-1 Tochka-U (AFIC/NATO Reporting name: SS-21 Scarab) short-range ballistic missile (SRBM). Various online photos and 3D renderings can be used to compare and validate. The most notable identifiers are the lattice aerodynamic rudders on the tail section, the four fins, and the metal line. 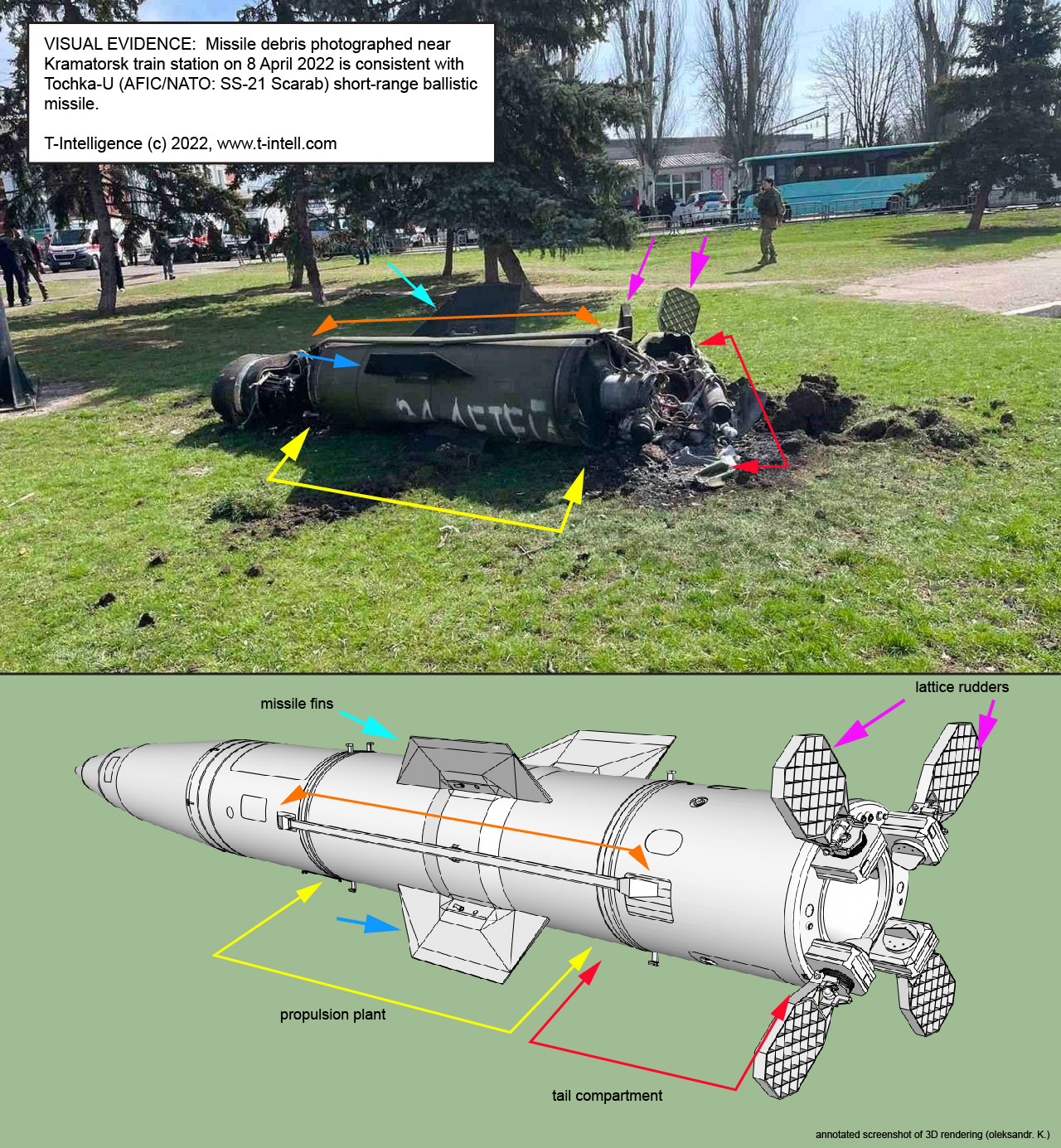 2. The Tochka-U can carry various warheads – conventional, high explosive, fragmentation, chemical, and nuclear – with a maximum payload weight of 480 kg. With a circular error probability (CEP) of 15 meters, the Tochka-U was designed for area effect in locations where collateral damage is not a concern. 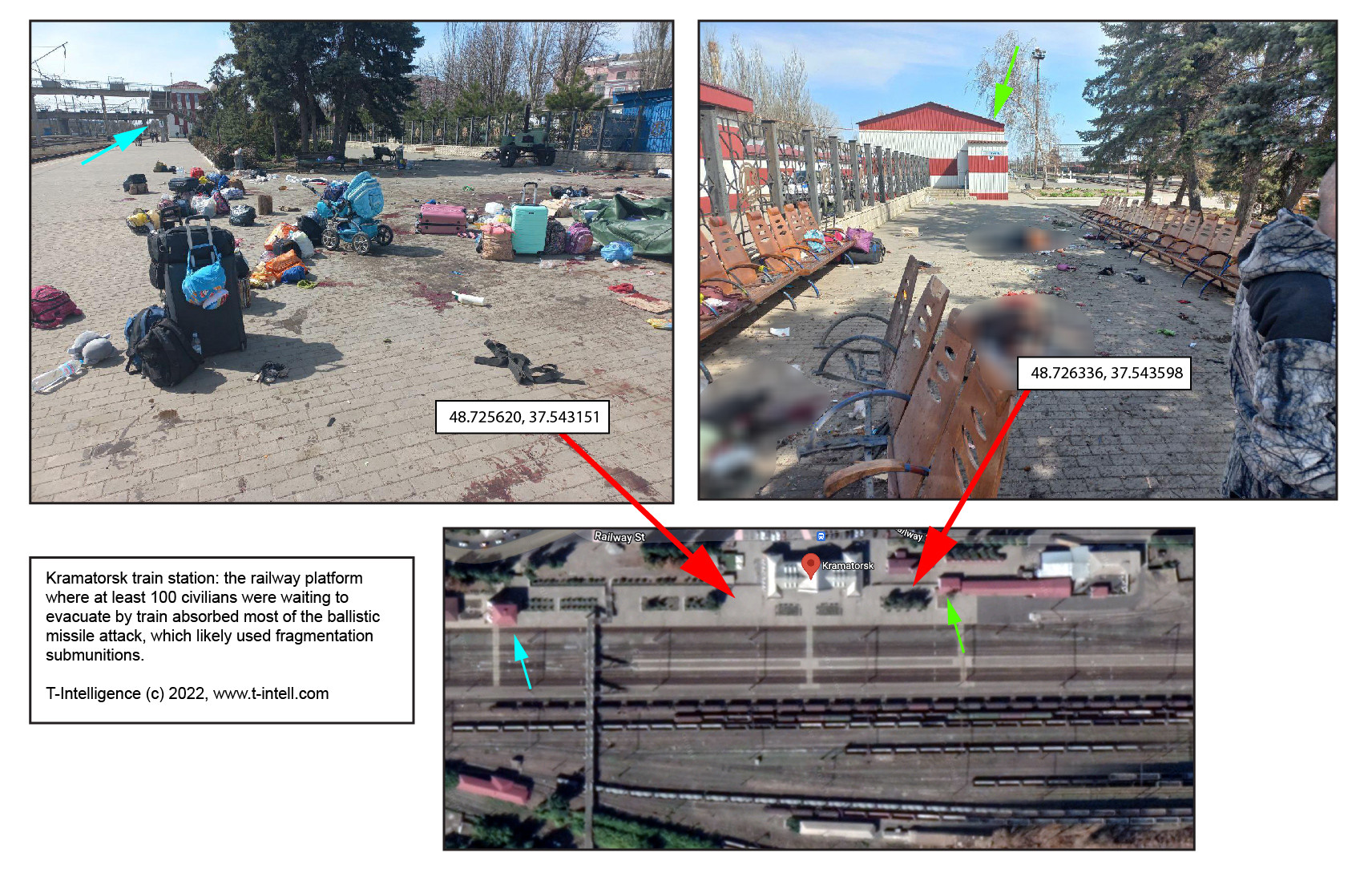 4. A closer inspection of the target site shows that most of the destruction rained on the railway platform. The area includes an outdoor sitting area, where hundreds of civilians were waiting to evacuate by train.

5. The targeting of civilians might have been the sole objective of Russia’s missile strike, considering that Kramatorsk train station is a key evacuation site. According to the city’s mayor, around 8,000 civilians have passed through Kramatorsk train station each day for the past weeks. The railway platform and outdoor seating area absorbed most of the damage; the railway remains functional.

Please share! World must know the truth!
The 🇷🇺 occupiers hit the #Kramatorsk railway station with a Tochka-U, where thousands of peaceful Ukrainians were waiting to be evacuated.
UPD. 39 dead, including 4 children.
Voice: God, there are so many children! How many corpses! pic.twitter.com/NiuV9o4zwY

6. The high number of casualties and lack of a major impact crater is consistent with the damage caused by a fragmentation warhead. Tochka’s 9N123K fragmentation warhead contains 50 submunitions (type 9N24) that deploy thousands of metal shrapnel pieces in the target area. The use of fragmentation submunition would also explain the steady rise in the death toll – initial reports said 27 killed, but the estimate went up to over 50 in several hours.

7. Targeting Kramatorks train station to reduce its logistical potential or destroy a military shipment might have been a secondary objective. If that was the case, the Russian military would have most likely fitted the Tochka-U with a conventional high explosive warhead and concentrated the strike on the railways. Even in the unlikely hypothesis that the infrastructure was the main target, the Russian Tochka-U units showed severe and inexcusable disregard for the heavy civilian presence at Kramatorsk train station attempting to evacuate.

8. Several videos are circulating on social media show missile launches that might be related to the Kramatorsk attack.

Launch of the “Tochka” missiles from #Shakhtersk to #Kramatorsk pic.twitter.com/jy8ENjyizY

9. Preliminary geolocations put the approximate launch near Shakhatersk inside Russian-held territory. The distance from the estimated launch site to Kramatorks is 109 km, which falls within Tochka’s maximum engagement range.

On 07.04 several videos were shared of a launch from the site. #geolocated from this photo
*note* this coinsides pretty accurate with NASA FIRMS map alerts on 08.04 (red alarms on map) https://t.co/wxOmiqsO3p pic.twitter.com/pNBa6dJp95

People keep asking us to Geoconfirm the launch site.
We have a possible launch location, but only from one direction.

The distance, timing and smoke trail matches the strike on #Kramatorsk.

We are looking for a second GeoConfirmation to triangulate the launch. pic.twitter.com/DrCbT0q7Oo

10. On the morning of 8 April 2022, the Russian Ministry of Defense (MoD) announced on Telegram that it had conducted missile strikes that “destroyed weapons and military equipment of the Ukrainian military reserves arriving in Donbass at Pokrovsk, Slavyansk and Barvenkovo railway stations.” Interestingly, the strike on Kramatorsk, the sister city of Slovyansk, was omitted. 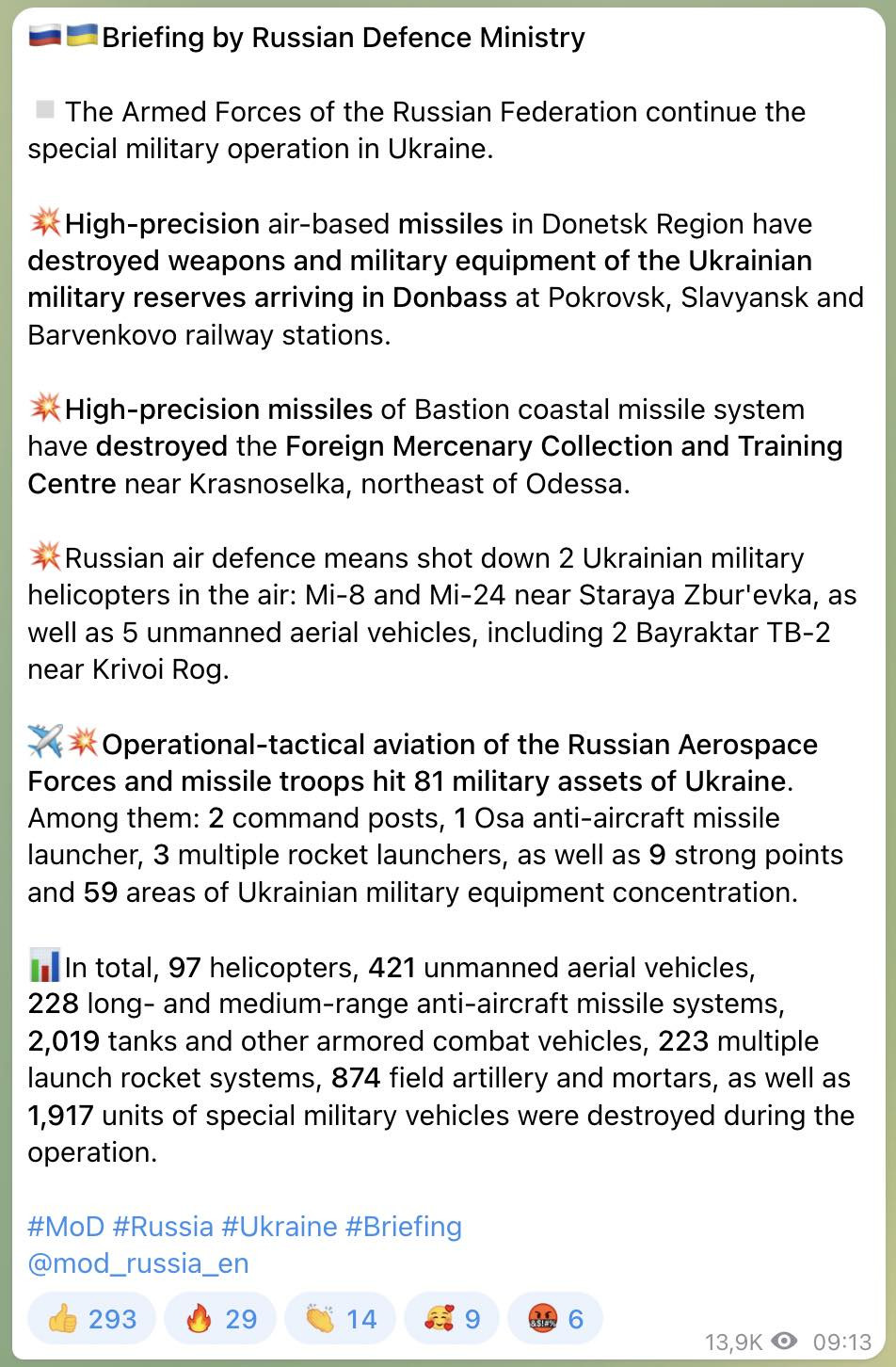 11. ANNA News, a known Russian disinformation outlet, quickly confirmed the Kramatorsk missile attack on Telegram, and claimed based on “verified information” that a Ukrainian military train was the intended target.  After news broke out that dozens of civilians died in the attack, ANNA News deleted the Telegram announcement. Luckily enough, many users managed to screenshot the post before it disappeared.

DON’T CALL IT A COMEBACK: TOCHKA-Us STILL IN SERVICE WITH RUSSIAN MILITARY

12. Despite official denials by Moscow, the Russian military still uses Tochka-U SRBMs. Some Tochkas probably never left service, while others were re-operationalized to preserve the Iskander SRBM stockpiles.

13. On 30 March 2022, footage posted on social media showed Tochka-U tractor erector launchers (TELs) with the Russian identification marking “V” on railcars stopped at a train station in Voevoda village, Belarus. The Voevoda rail stop is 20 km southeast of Gomel and 30 km from the Ukrainian border. Geolocation confirms the event and puts the train at 52°18’31.5″N 31°12’32.0″E. The original source, TikTok user “@_taiger_Z”, uploaded the video on 30 March 2022 (archived).

14. According to Conflict Intelligence Team (CIT), who checked railcar databases, the Tochka-Us were rushed to Belgorod in Russia (40 km from Kharkiv, Ukraine). The end destination suggests a likely redeployment amidst Russia’s planned focus on eastern Ukraine as part of its downsized war plans.

15. Before 31 March, a V-marked convoy, including eight vehicles consistent with Tochka-U TELs and transloaders, was filmed moving along the M10 highway from Rechitsa to Gomel. Defense blog also featured this video in an article marking the return of Tochka-Us to active service with the Russian military. The exact date of this video could not be established, but it is possible that it was filmed on the morning of 30 March, as the uploader claims.

7:50
A column of Russian equipment with “V” marks was moving from Rechitsa towards Gomel along the M10 highway.
There were at least 8 Tochka-U, several BTR-82a, about 9 KamAZ trucks, some of which are carrying Tochka-U missiles, communication vehicle and a crane. pic.twitter.com/UFF0cmrgv5

16. Historical weather data indicates that it snowed in Gomel between 08:30 and 10:30 on 30 March, with temperatures between -1 and 3 Celsius. In Rechitsa, the temperature was lower, ranging from -2 to -4 degrees. Optical satellite imagery could not be obtained for verification due to cloud cover. It is also possible that the video was filmed in late February, during or after the Russian-Belarussian exercises that Moscow used as cover for its deployment north of Kyiv. 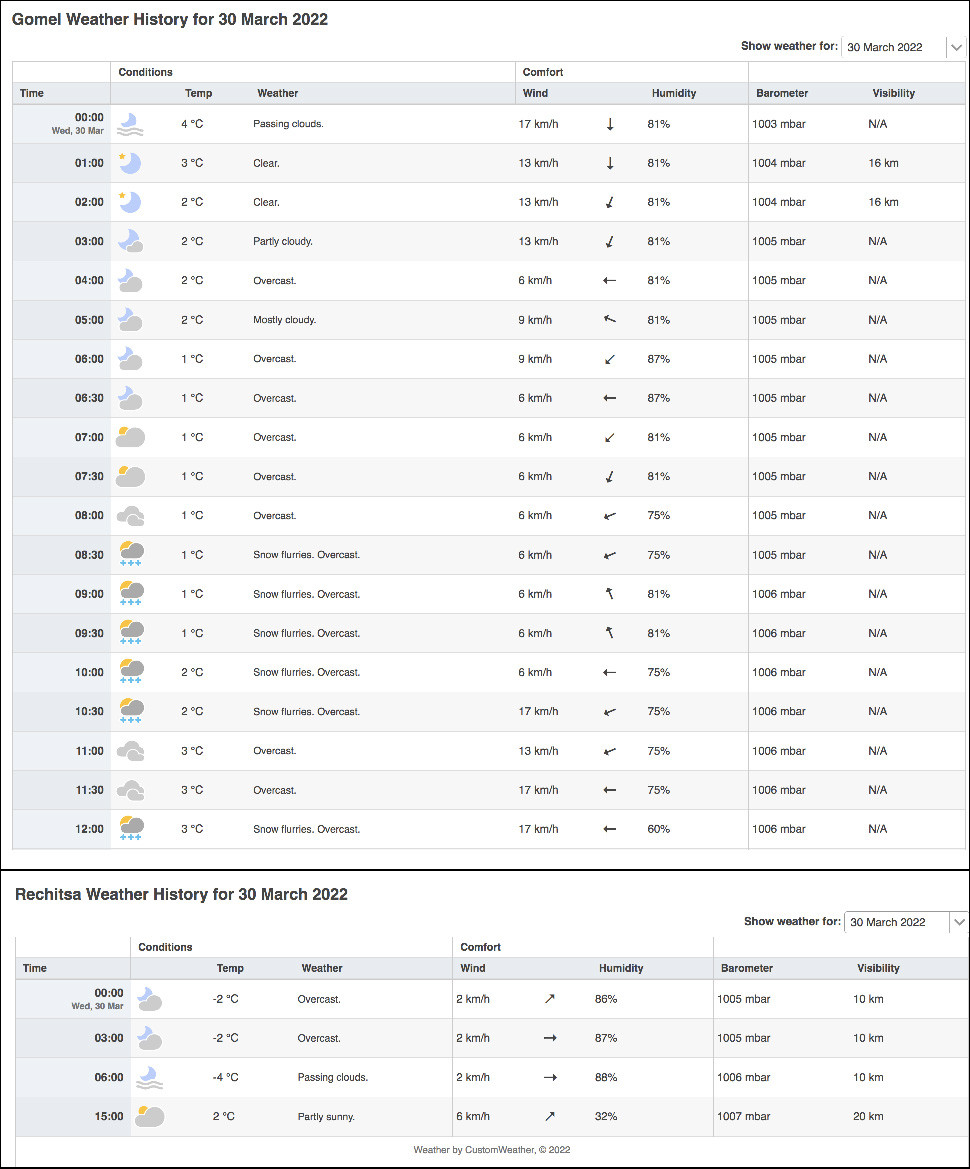 17. Russia’s 47th Missile Brigade (Southern Military District/MD), based in Korenovsk, was still using Tochkas in 2021, according to CIT. The 47th has only received Iskander SRBMs in January 2022, and as the CIT analysts argue, the unit likely continues to field Tochkas as a stopgap measure until full operational capability of the Iskanders is achieved. The Donbas is the Southern MD’s area of responsibility.

The Russian MoD claims that Russia does not have “Tochka-U” missile systems. This is demonstrably untrue.

Russia’s 47th Missile Brigade from Korenovsk was armed with Tochka-U and received Iskander missile systems only this January, unlikely to have mastered them already. pic.twitter.com/1FHBQWlcQX

18. Hundreds of Russian Tochka-U SRBMs are likely kept in reserve and can be swiftly re-operationalized. The vast majority of Russian missile brigades retired their Tochka-U systems between 2010 and 2019 when they received the new generation of operational-tactical Iskander missiles. This means that most Tochkas have not been disabled and remain functional – most militaries allow for several years to pass until they start destroying retired equipment.