HARM
Comments Off on U.S. Maintains Pressure on al-Qa’ida’s Most Overlooked Franchise

A covert US airstrike has killed the leader of Tanzeem Hurras al-Din (HAD), al-Qa’ida’s leading Syrian franchise, in Idlib province on 14 June 2020. Abu al-Qassam (also known as Khaled…

A covert US airstrike has killed the leader of Tanzeem Hurras al-Din (HAD), al-Qa’ida’s leading Syrian franchise, in Idlib province on 14 June 2020. Abu al-Qassam (also known as Khaled al-Aruri) was a seasoned al-Qa’ida (AQ) operative who was plotting attacks against the West.

Impact marks on the target vehicle, blade cuts, and ordnance debris suggest that the US employed the secretive, blade-wielding derivative of the AGM-114 Hellfire, known as the R9X.

AGM-114R9X HELLFIRE AKA THE “FLYING GINSU”

While the United States never officially acknowledged its existence, the R9X is an open secret. The R9X trades the “Hellfire” warhead for six sword-like blades that eject upon impact and slice the target into pieces. Because there is no explosion, the weapon minimizes collateral damage.

The R9X debuted in February 2017, when it neutralized AQ deputy commander Abu Khayr al-Masri near al-Mastouma in Idlib province. Since then, JSOC and the CIA have repeatedly used the weapon against high-value targets in northwestern Syria, Afghanistan, and reportedly the Horn of Africa. WHY IS THE US TARGETING TANZEEM HURRAS AL-DIN (HAD)?

Tanzeem Hurras al-Din (HAD, or “Guardians of the Religion Organization”) was founded in February 2018, when a group of AQ loyalists splintered from Hay’ at Tahrir al-Sham, the most influential terrorist group in Idlib. The hardliners left because HTS publicly cut ties with AQ central.

Now AQ’s leading Syrian franchise, HAD aims to overthrow the Syrian regime and establish a regional Islamic State. In contrast to HTS, HAD is outspoken about its intent to attack the United States and the West.

Despite its malign intentions, international observers and the press often overlook HAD. According to a UN intelligence report, HAD’s numbers are currently small (between 1,500 and 2000 fighters), the group exercises little territorial influence and depends on HTS funds to operate.

In the long term, HAD could nevertheless establish itself as a more radical alternative to HTS. While HTS cooperates with Turkey on the Sochi peace process, HAD opposes negotiations with the “infidels.” HAD favors a full-out confrontation with the pro-government forces. Part of this strategy is to mobilize the Syrian opposition under its wing and AQ banner.

The United States intelligence and military collectively refer to HAD, HTS, and other ex-Jabhat al-Nusra groups as al-Qa’ida in Syria (AQ-S). Despite their different policies and marketing strategies, the jihadi groups are still cooperating to achieve AQ’s global agenda.

In response to the growing terrorist threat in northwestern Syria, the US has deployed kinetic options to weaken AQ-S groups. The campaign began in 2014, when American drones targeted the Khorasan Group, then Ahrar al-Sham and Jabhat al-Nusra. The operational tempo increased in 2019. American drones prosecuted four targets: A HAD training camp in June, a HAD safehouse in August, a foreign trainer of the “Red Bands” (HTS’ special forces) in December, and a car carrying Ahrar ash-Sham members later that month.

With the latest strike on 14 June 2020, it becomes clear that HAD has absorbed the lion’s share of US airstrikes in Idlib. The focus on HAD indicates that Washington is increasingly concerned about the group’s intentions to attack the West.

Intelligence suggests that HAD has recruited ISIS fighters who escaped from the siege on Baghuz al-Faqwani – diehards with extensive combat experience, and possibly networks of terrorist cells. HAD fighters also enjoy a fast gateway to Europe and other locations in the Middle East, due to their proximity to Turkish territory. Likely, the reduction of violence in Idlib has given HAD breathing space to build external terrorist networks and plan strikes against the West.

HARM
Comments Off on U.S. on Alert as Idlib Offensive is Imminent: Threat of Chemical Attacks?

(1) The White House and the U.S. Department of Defense are closely monitoring the situation in the greater Idlib region. Over the past days, the Bashar al-Assad regime has continued…

(1) The White House and the U.S. Department of Defense are closely monitoring the situation in the greater Idlib region. Over the past days, the Bashar al-Assad regime has continued to amass army formations and Iranian-backed militias in the main assault positions around the opposition-held stronghold.

(2) The 4th Armored Division has been moved to Northern Hama. Their position is strengthened by a rare deployment of the Republican Guards, both near Lataminah and Jabal al-Turkmen. In Western Aleppo, Iranian-backed militias, spearheaded by Hezbollah and Iraqi Popular Mobilization Units (PMUs), are completing their transfer from the Deir ez-Zor frontline. The strategic Abu ad-Duhur airfield, located on Idlib’s Eastern flank, has been reinforced by the deployment of Assad’s most battle-hardened and elite unit, the Tiger Forces. Reconciled opposition groups from Da’ara province are also moving towards Idlib. The infantry build-up is supported by the Syrian Arab Air Force (SyAF), which has dispatched Mi-8/17 helicopters to Hama airfield, and by an unprecedented Russian naval deployment in the Eastern Mediterranean. Two days ago, the Syrian army closed al-Duhr checkpoint, the last civilian crossing out of Idlib. 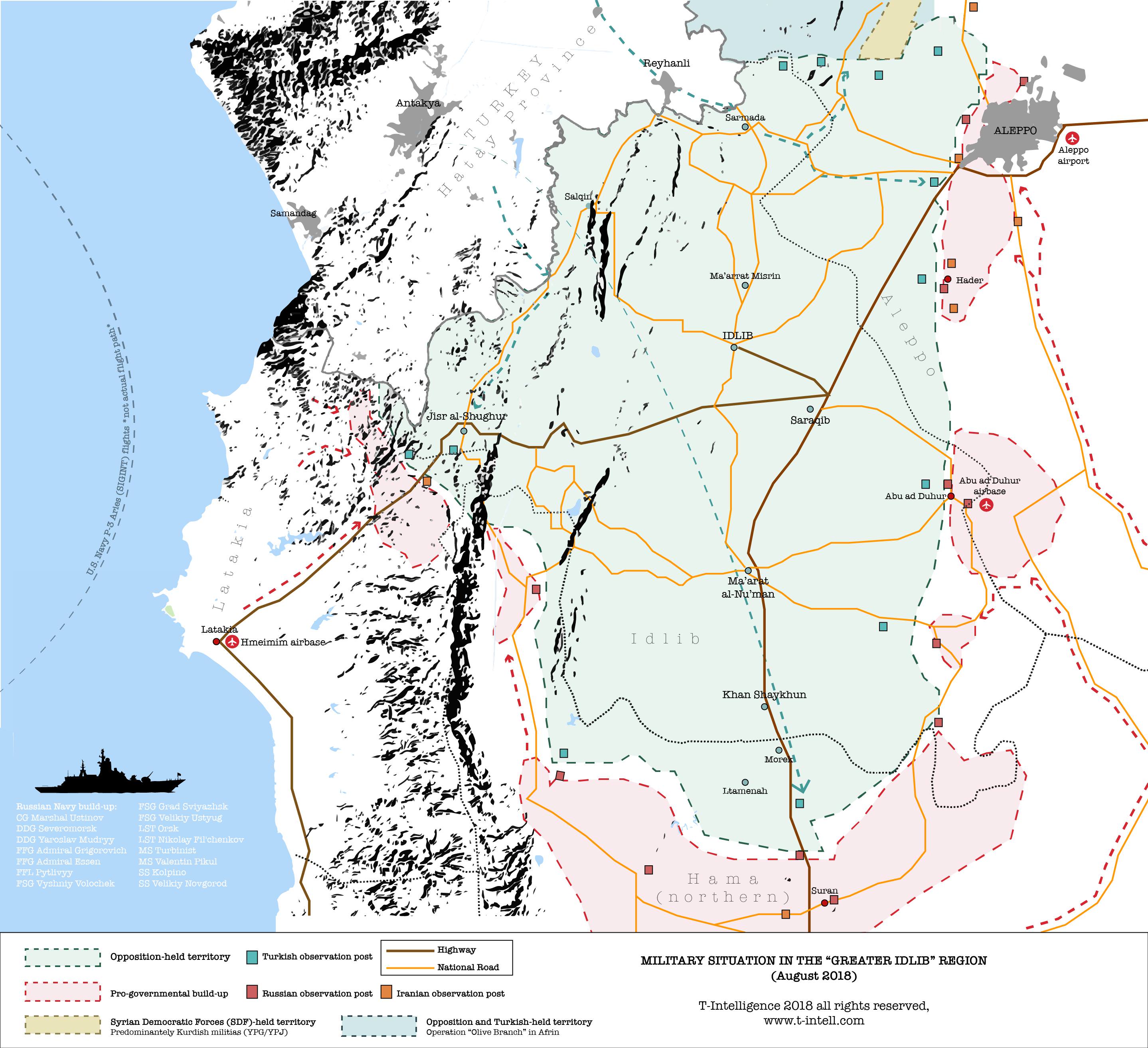 (3) As the start of the offensive seems imminent, the U.S., France and the United Kingdom have voiced concerns that the Assad regime will follow the “Eastern Ghouta model” and launch chemical weapons (CW) attacks on opposition-held towns.  Opposition groups claim that they have (unverified) information pointing towards the town of Kafr Zabl as the main target for the regime’s impending CW attack.

(4) The U.S. military and intelligence community are therefore on high alert for any signs that the Assad regime is readying chemical weapons for use in Idlib. The U.S. Central Command (CENTCOM) has stated that its assets are prepared, should President Trump order a strike. The American-British-French coalition has issued several warnings for Assad: Fight fair or expect another retaliation.

(5) At the moment, Assad’s preferred solution still seems to be a Russian-brokered reconciliation deal with the opposition in Idlib, similar to the deals negotiated in Eastern Ghouta, Da’ara and Rastan. Since early-August, Russia has been conducting talks with leaders of the non-al Qa’ida (AQ) opposition (the Turkish-backed “National Front for Liberation”) at the Reconciliation Center on Hmeimim air base (Latakia). Turkey has been encouraging opposition groups to join the talks and is reportedly coordinating with Russia on a settlement. Currently, Russia and Turkey are trying to convince the opposition groups to hand over all weapons heavier than 23mm anti-aircraft twin-barrel autocannons to the Turkish Army.

(6) However, the Russian and Turkish negotiation efforts have failed to produce meaningful results. The non-AQ opposition groups continue to strengthen their unified front and enhance frontline positions. The AQ camp in Idlib – Hay’at Tahrir al-Sham (HTS), Turkistani Islamic Party (TIP) and Tanzim Hourras al-Din – has slammed the idea of negotiations and is attacking any opposition group that has engaged in reconciliation talks with the government. Furthermore, the AQ-affiliated groups have refused Turkey’s proposal to join the “National Liberation Front.”

(7) The unsuccessful negotiations put the Assad regime in an increasingly difficult spot. According to intelligence estimates, a conventional military campaign to recapture Idlib would be devastating for the Syrian military with regard to resources, manpower, and capabilities. As Turkish troops are embedded in the Idlib frontline and equipped with man-portable air defense systems (MANPADS), air support for the advancing troops would be extremely limited.

(8) Should the reconciliation talks fail, a CW attack – as feared by the American-British-French coalition – is therefore becoming more likely. As the Eastern Ghouta and Khan Shaykhun precedents have shown, the Assad regime is  willing to use CW attacks to coerce opposition groups into surrendering. Although the CW-option would likely trigger new Coalition strikes on Syrian military installations, the Assad regime might be willing to take these hits to avoid a costly, “Aleppo-style” military campaign – especially if the strikes are expected to remain largely symbolic. After all, a full-scale military offensive will also cause international outrage, given the impending humanitarian costs, suffered by the almost 3 million internally displaced people currently living in Idlib.

(9) In this context, the recent deployment of “barrel bombing” Mi-7 helicopters to Hama airfield is highly suspicious – considering that a large-scale air campaign is out of the question due to the Turkish presence on the frontline. In the precedent cases, helicopters have been the delivery system of choice for CW attacks.

(10) Furthermore, Moscow already seems to draw up contingency plans for the case of an attack. Over the past days, Russian outlets have manipulated American warnings and established a counter-narrative. Sputnik News, RT and friendly/bot social media accounts are accusing the U.S. of conspiring with the opposition in Idlib to stage a false flag CW attack  justifying further strikes in Syria.

(11) In the meanwhile, the Coalition and Turkey are trying their best to prevent a conventional or CW bloodbath in Idlib. Ankara has authorized a variety of military deployments to reinforce its posture and deter pro-government attacks. Around 224 special operations forces were dispatched to the observation posts (OB-P) on Idlib’s frontline, while Leopard-2 tanks are amassing in Western Aleppo. Turkey is building a helipad near the “hottest” OB-P in Northern Hama and strengthening all OB-Ps through further concrete fortifications. Many civilians have reportedly fled their homes to camp next to the Turkish OB-Ps, as they are currently considered to be the safest areas in Idlib.

(12) However, the fate of Idlib also hinges on the resolve of the Coalition. If the Trump administration wants to prevent a CW attack, the White House has to draw a robust and credible red line this time. To change the regime’s cost/benefit calculation, Assad and his generals need to know that retaliation is not bound to limited or symbolical strikes. Severe blows against the amassed troops around Idlib, the vital air defense infrastructure and even regime change need to be (convincingly) on the table.

END_OF_DOCUMENT_TOKEN_TO_BE_REPLACED
Comments Off on U.S. on Alert as Idlib Offensive is Imminent: Threat of Chemical Attacks?