The deepening crisis in the Middle East has prompted American and British authorities to review travel advice information for the region. Following the United States UAV-strike that killed Iranian Revolutionary Guards Corps – Quds Force (IRGC-QF) Major-General Qassim Soleimani, tensions have been high between Iran, which seeks retaliation, and the US-led International Coalition against ISIS.

Even before the strike, intelligence suggested that Iran and its network of Shiite paramilitary groups – many sanctioned terrorist groups – were plotting to kidnap, attack or kill foreign citizens in Iraq, in particular U.S. diplomatic personnel. With the recent developments, the security risk for foreign citizens has significantly increased. Currently, there is also a risk that foreign nationals – in particular American and British – could be arbitrarily detained by security personnel in Iran, or by militiamen in Syria, Iraq, Yemen and Lebanon.

In addition, there is a heightened risk of mortar, rocket and missile attacks in Israel, Lebanon, Syria, Iraq, Kuwait, Qatar, Bahrain, United Arab Emirates (UAE) and the Kingdom of Saudi Arabia (KSA).

STAY AWAY FROM CROWDS

Angry crowds have taken to the streets to condemn the killing of IRGC-HQ Maj. Gen. Soleimani in the Middle East. Many demonstrations are led or coordinated by hostile militias, which could result in violence. You should avoid any rallies, marches, processions, and keep away from military sites.

FURTHER ADVICE: Please monitor your country’s foreign travel service for updates and editorial reviews. Things can change fast as the situation in the Middle East is extremely fluid.

Most of the U.S Department of State (DOS)-issued travel warnings in the Middle East are not new and have remained unchanged for years. However, the DOS has reviewed and amended its travel advice for Iraq and Iran in the past two weeks. 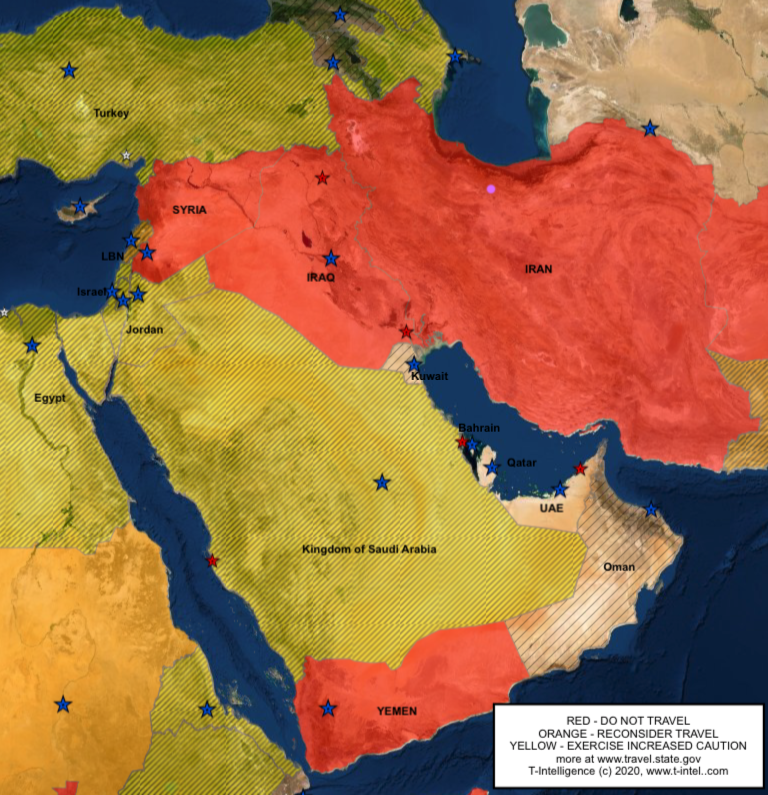 IRAQ. Last updated on January 1, 2020. The DOS maintains the Level 4 TAL – DO NOT TRAVEL for Iraq. The DOS advise all U.S. citizens against all travel to Iraq due to terrorism, kidnapping, and armed conflict.

On December 31, 2019, the U.S. Embassy in Baghdad suspended public consular services, until further notice, as a result of damage done by Iranian-backed terrorist attacks on the diplomatic compound. On October 18, 2018, the DOS ordered the suspension of operations at the U.S. Consulate General in Basrah.  That institution has not reopened. Only the U.S. Consulate General Erbil remains open and continues to provide consular services.

IRAN. As of January 6, 2020, the FCO advise all British nationals against all but essential travel to Iran and against all travel to:

However, for British-Iranian dual nationals the FCO advise against all travel to Iran. If you’re in Iran, you should consider carefully your need to remain. If your continued presence is not essential, you should consider leaving. There is a risk that British nationals, and a significantly higher risk that British-Iranian dual nationals, could be arbitrarily detained or arrested in Iran.

The criminal justice process followed in such cases falls below international standards. Iran does not recognise dual nationality. If you are a dual British-Iranian national and are detained in Iran, the FCO’s ability to provide consular support is extremely limited

If you’re in Iraq or decide to travel, make sure you have robust contingency plans in place and keep these under review. You should keep up to date with the latest developments across the country, including via the media and this travel advice, avoid any rallies, marches or processions, and follow the instructions of local authorities.

SYRIA. As of January 6, 2020, the FCO advise against all travel to Syria. British nationals in Syria should leave by any practical means. Consular support is not available from the British government from within Syria, as all services of the British Embassy in Damascus are suspended and all diplomatic and consular staff have been withdrawn. If you need to speak to a consular officer in the UK, call the FCO in London on +44 (0)20 7008 1500.

YEMEN. As of January 6, 2020, the FCO advise against all travel to Yemen. This includes the mainland and all islands. If you’re in Yemen, you should leave immediately. If you choose to remain in Yemen, you should minimise movement around the country and within cities and towns, monitor developments in the local security situation and follow other precautions in this travel advice. Consular support is not available from the British government from within Yemen. If you need to speak to a consular officer in the UK, call the FCO in London on +44 (0)20 7008 1500.

GULF STATES. The FCO reviewed the FTA for Kuwait, Bahrain, Qatar, the UAE, KSA and Oman, but has not issued a warning against travel. However, all of these countries have pre-existing security alerts due to terrorism. The risk of terrorist attacks in the Gulf is likely or very likely (depending on the state). Exercise caution and regularly check the travel advice for each country.

Baghdad Parliament Votes to Expel US & Coalition Forces from Iraq