The Afghan National Security Forces (ANSF) have successfully repelled the Taliban’s assault on Kunduz, Afghanistan’s second largest city. The Afghan government announced that the ANSF have killed at least 36…

The Afghan National Security Forces (ANSF) have successfully repelled the Taliban’s assault on Kunduz, Afghanistan’s second largest city. The Afghan government announced that the ANSF have killed at least 36 Taliban fighters and cleared the city from any residual enemy presence. The recent assault was the third Taliban attack on Kunduz in the last four years. The militants briefly captured the city for two weeks in 2015 and 2016 respectively.

The Taliban offensive commenced on Saturday, August 30, at 2 am local time, when more than 50 militants attacked Kunduz from three different directions. The deadly night raid, in which the Taliban seized several governmental buildings, took local authorities by surprise. The hardline Islamists claim that they have killed more than 40 Afghan forces, seized 11 vehicles, and captured a number of weapons. Afghan commandos, backed by their debuting air force, averted the Taliban’s advance towards the city center.

On Saturday evening, a suicide bomber struck a press confernece of the Afghan police at a busy roundabout. The public address was meant to debunk claims that the Islamists had taken the city center. The suicide attack killed the police spokesman and ten Afghan soldiers, including a senior colonel. Top US commander General Austin Miller as well as the Afghan ministers of interior and defense landed in Kunduz shortly before the suicide attack, in an effort to boost morale.

While the offensive was repelled, Afghan authorities have stated that clearance operations are still underway. Many Taliban fighters have holed up in civilian houses and continue to present an immediate threat. 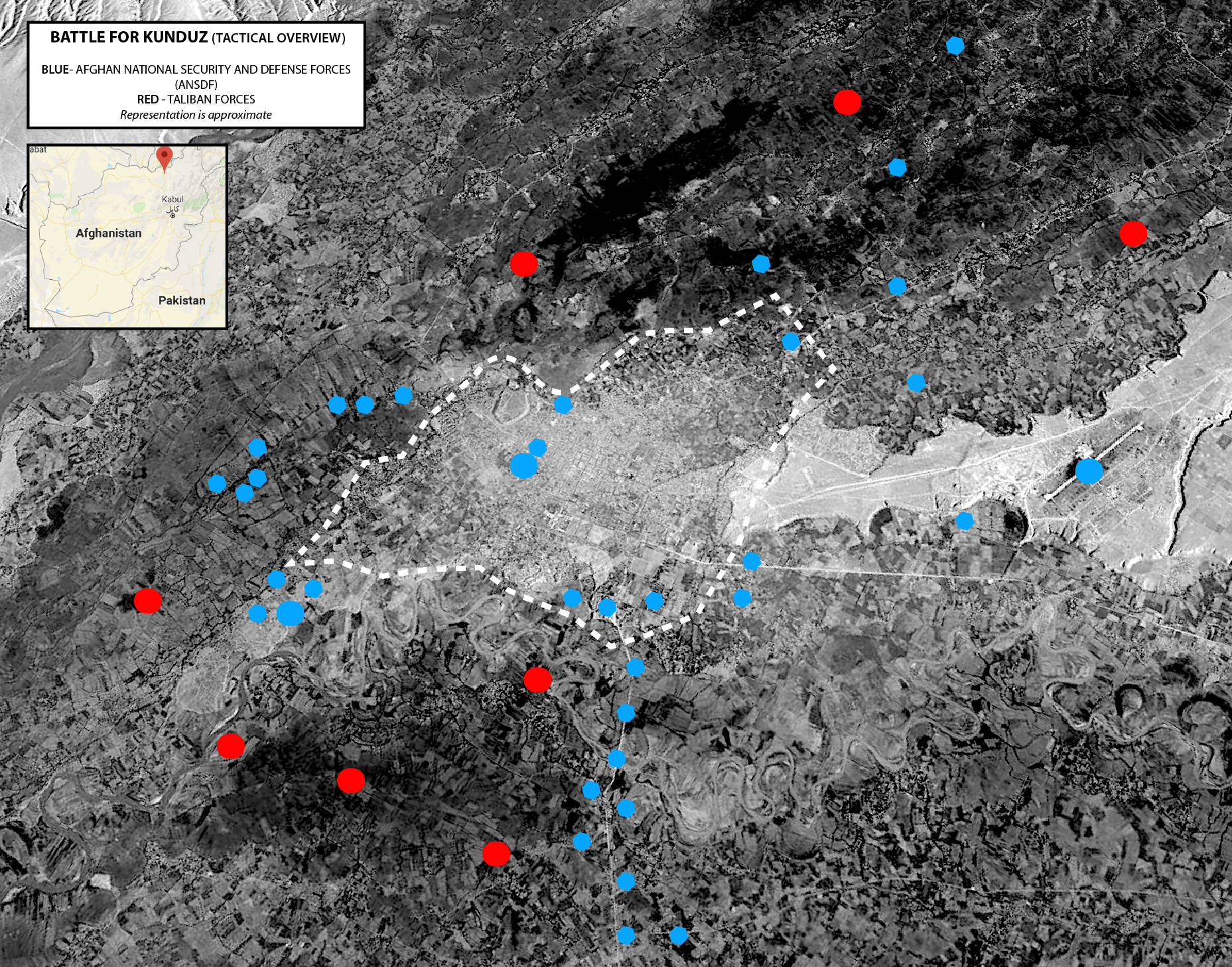 Attacks like the Kunduz offensive strengthen the Taliban’s position in the ongoing peace negotiations with the US in Doha (Qatar). The Taliban are presently at their strongest since 2001. The Islamists control nearly half of the Afghan territory and contest a large number of districts.

Profiting from the poor state of the ANSF and Afghan National Army, the Taliban have intensified attacks on urban centers in the past two years. With each successful attack, the Islamists gain confidence to expand their operations from remote mountain areas to densely populated areas. Many Taliban factions are still convinced that they can win the war by military means and do not need political talks with the US.

Despite the ongoing wave of violence, the US Special Presidential Envoy for Afghanistan recently stated that a peace agreement with the Taliban is imminent. As the Taliban’s primary condition for negotiations is the withdrawal of all foreign forces from Afghanistan, it is virtually certain that the nearly 20,000 US and NATO troops are preparing to leave the country. Washington hopes that appeasing the Islamist group will pave the way for direct negotiations between Kabul and the Taliban. However, the withdrawal of US forces from Afghanistan will likely leave the fragile ANSF and ANA at the Taliban’s mercy.

As key IS-K territories are under pressure by the Afghan National Defense and Security Forces (ANDSF) and the rival Taliban, the group is seeking to capture new high-ground sanctuaries on…

As key IS-K territories are under pressure by the Afghan National Defense and Security Forces (ANDSF) and the rival Taliban, the group is seeking to capture new high-ground sanctuaries on the border with Pakistan. After defeating the Taliban in a turf war, IS-K is currently entrenching positions in the Korengal valley. While the group’s overall lethality has decreased, IS-K remains a threat for Transatlantic security interests and regional security. Since 2015, IS-K has conducted at least 83 attacks on government and civilian targets in both Afghanistan and Pakistan.

1.Since its inception in January 2015, the “Islamic State – Khorasan province” (IS-K) has been engaged in a multi-front war against the rival Taliban, the United States and the Afghan government. IS-K largely consists of disenfranchised Tehrik-e Taliban Pakistan (TTP) splinter groups, the Islamic Movement of Uzbekistan (IMU) and a small segment of foreign terrorist fighters (FTT) of other origin.

2. IS-K aims to establish an Islamic State in Central Asia (including, but not limited to Afghanistan and Pakistan), which would become a province of the wider global caliphate led by Abu Bakr al-Baghdadi. IS-K is in contact and has received direct support from ISIS central. Furthermore, high-value individuals fleeing from the Syrian and Iraqi battlefields have found shelter in Afghanistan.

4. In 2019, IS-K is less popular and under more pressured than ever before. The group has banned drug cultivation and trade, executed community elders, and imposed Sharia law on isolated tribes, causing unrest and uprisings. At the same time, joint U.S.-Afghan special operations raids have re-directed IS-K’s expansion from the Spin Ghar mountain range to borderlands controlled by the Taliban, resulting in escalating violence between the two insurgent groups. 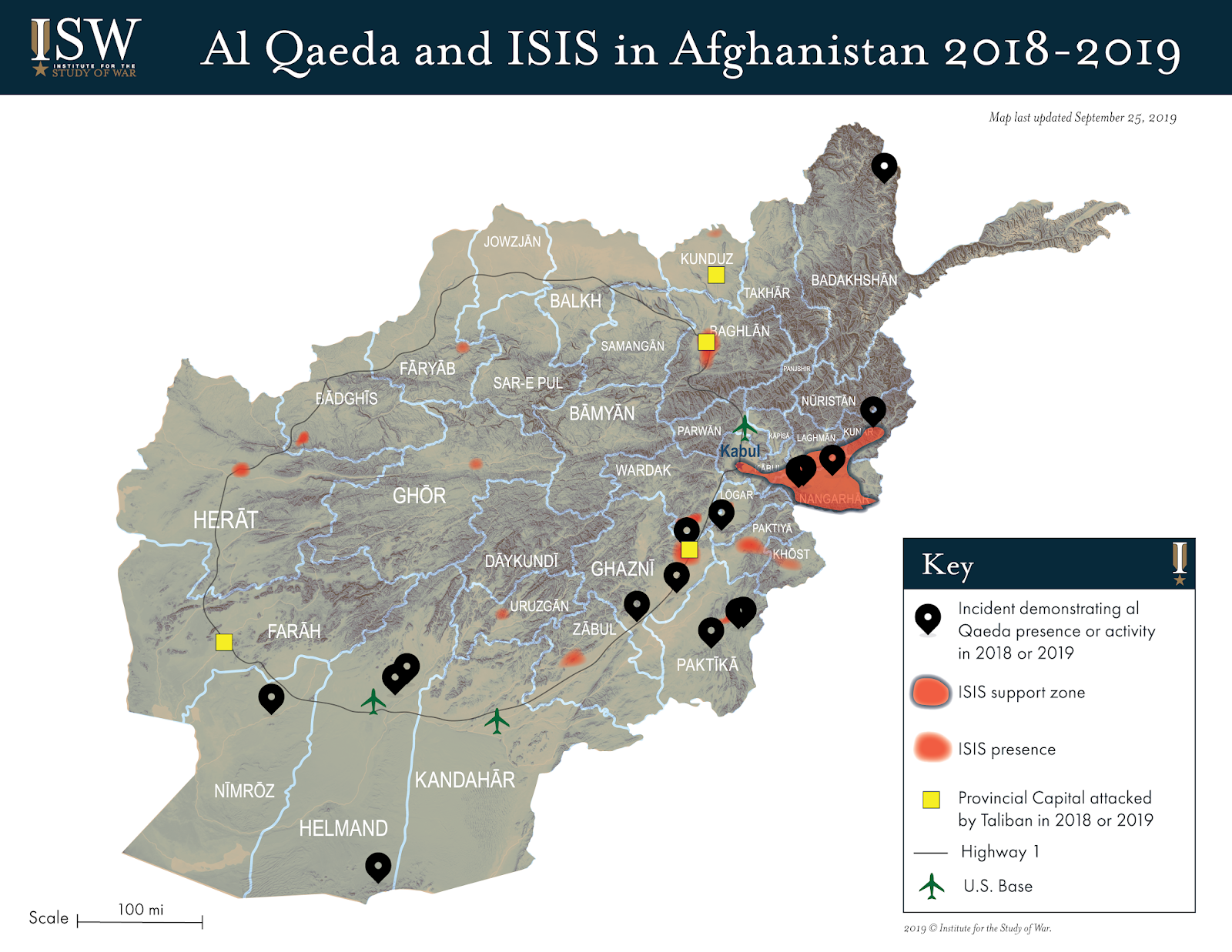 5. IS-K has built its territorial foothold in the TPP’s and IMU’s areas of influence. While the group did not succeed in capturing urban centers or large rural areas, IS-K controlled a number of Uzbek-villages in Jowjzan province and continues to find sanctuary in key valleys in the N2KL area (Nangarhar, Nuristan, Kunar and Laghman) on the border with Pakistan. IS-K also operates an unknown number of cells in more than ten other Afghan provinces, including Kabul and Herat. In Pakistan (PAK), IS-K is embedded with Khyber Pakhtunkhwa tribal agencies.

6. N2KL is located in the Hindu Kush mountain range on the Afghan-Pakistani (AFG-PAK) border. The area is strategic, as insurgent groups are able to leverage the porous border area to establish sanctuaries and move supplies.

7. Within the N2KL area, IS-K is currently the strongest in Nangarhar province. The group controls parts of the Spin Ghar mountain range in southern Nangarhar province and is highly active in the Mohmand and Takho river valleys in Achin district. Mohmand and Takho valley are inhabited by Mohmand Pashto tribesmen, whose settlement area extends across the AFG-PAK border into Tirrah valley. Deh Bala and Nazyan also experience significant IS-K activity. Over 60 percent of the provincial population is engaged in subsistence farming. Some inhabitants enjoy limited day-labor opportunities in Pakistan. 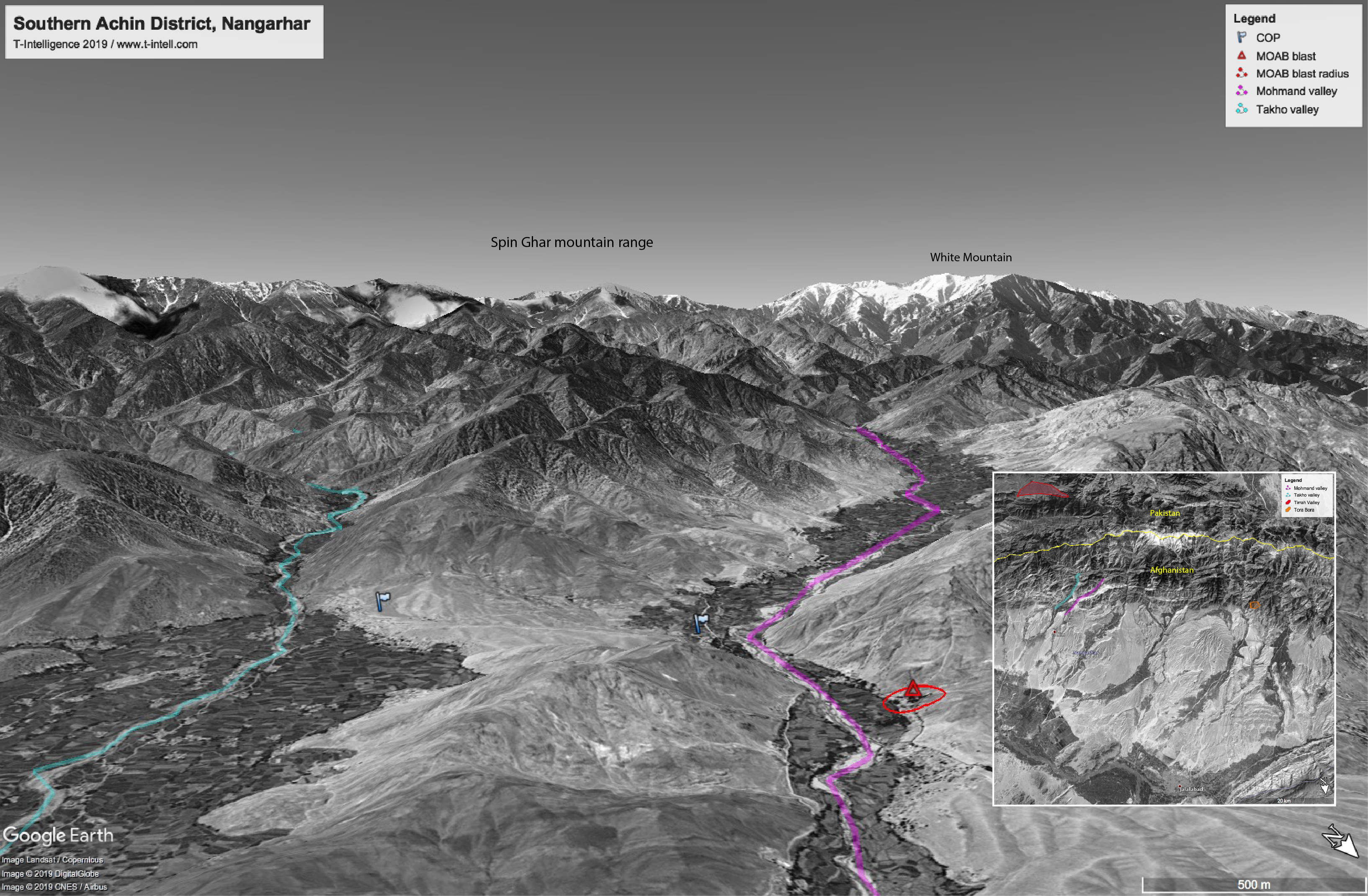 8. In Kunar province, IS-K recently gained control of the strategic Korengal valley after months of fighting with the Taliban – this information was confirmed by Kunar Provincial Council member Abdul Latif Fazly. Together with Pech valley, Korengal forms a strategic corridor that stretches from the AFG-PAK border to Nuristan. With the Pech-Korengal corridor under its control, IS-K can now supply operations that reach deeper into Afghan territory. However, the valley remains virtually ungovernable and volatile for all parties involved. 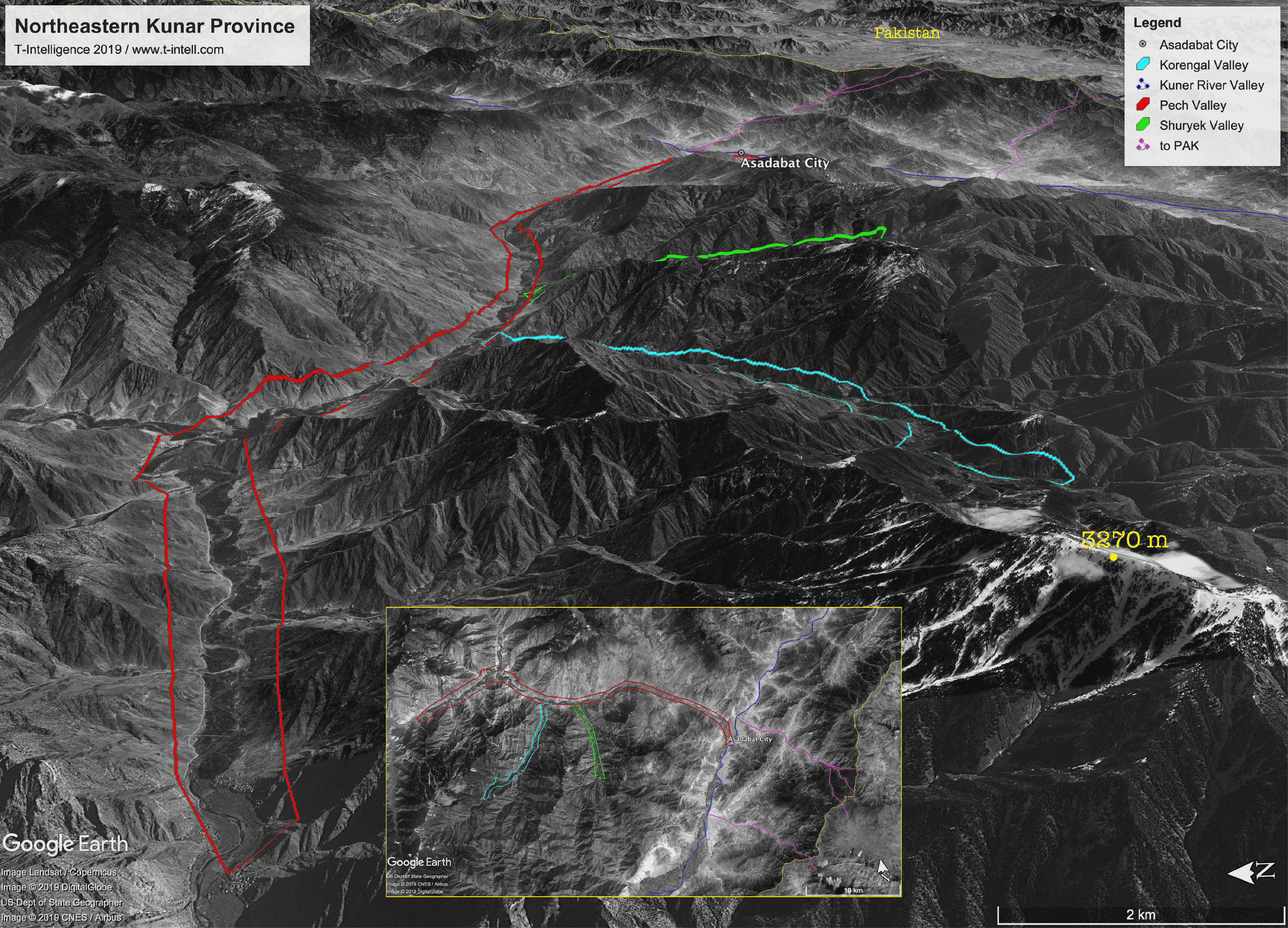 9. Jowjzan became an IS-K territory when the Islamic Movement of Uzbekistan (IMU) merged with IS-K in mid-2015. As Jowjzan is Afghanistan’s only Uzbek-majority province, it traditionally served as a sanctuary for IMU. 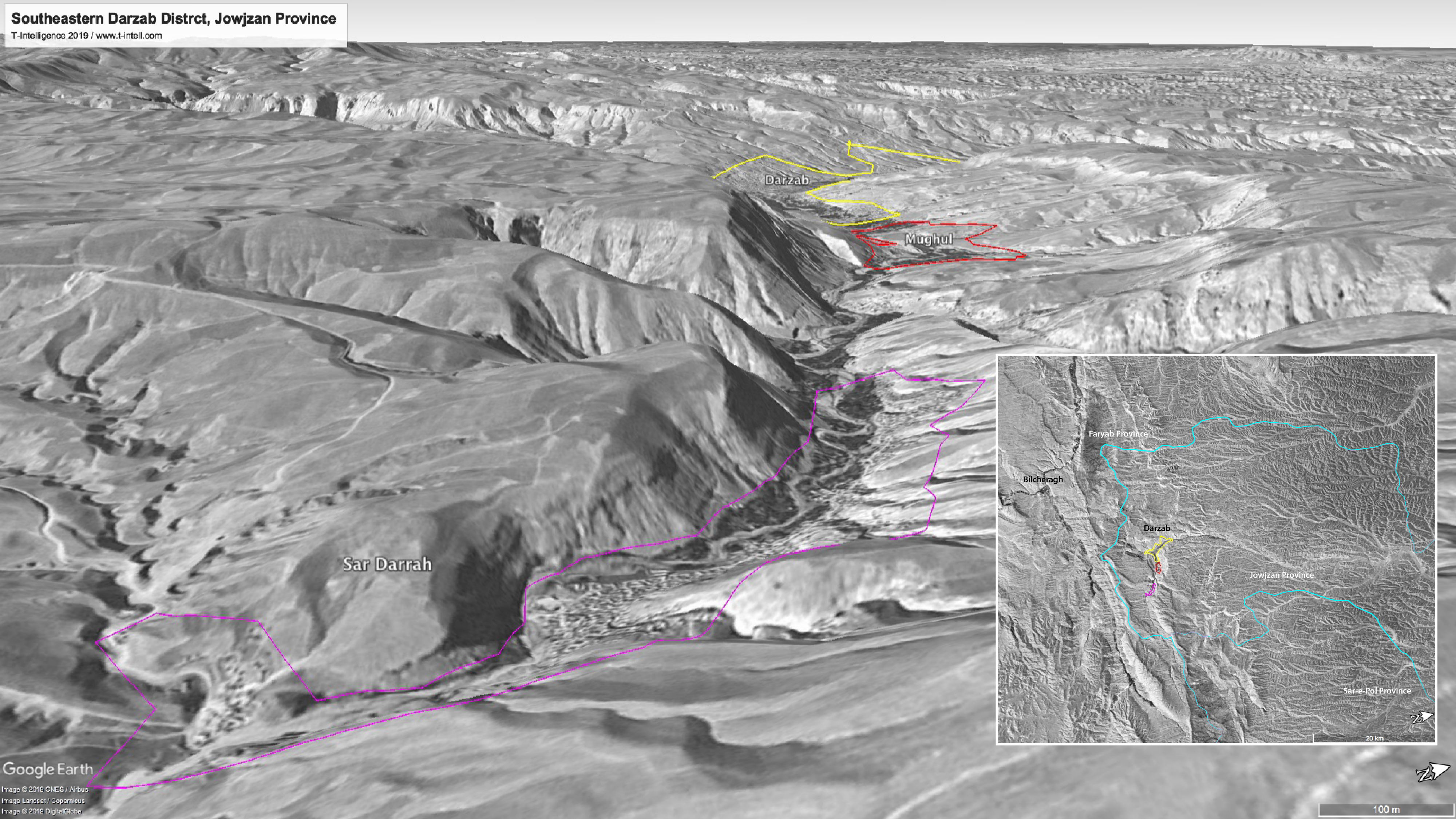 10. In northwestern Afghanistan, IS-K seeks to exploit the growing ethnic tensions between Turkic, Pashtun and nomadic populations and leverage sectarian rifts with the Shia Hazara. The IS-K presence in the Northwest coincides with the Taliban’s attempt to contest government control in Faryab, Badghis and Herat province. Increased activities among Turkic populations could also increase the group’s reach into Central Asian states such as Tajikistan.

11. IS-K remains capable of conducting mass-casualty attacks against government and sectarian (mostly Shi’a Hazara) targets on a transnational scale. As our data analysis shows, Kabul and Jalalabad are particularly vulnerable to IS-K violence. 12. The data set consists of 83 attacks claimed by IS-K in Afghanistan and Pakistan from January 2015 to December 2018. Most attacks took place last year (48), followed by 2017 (20) and 2015-2016 (13). The lethality of attacks has gradually decreased, with a major drop in May 2018. Since then, the vast majority of IS-K attacks resulted in less than 20 casualties per attack. This coincides with IS-K’s territorial loss in Jowjzan and Nangarhar provinces. Out of IS-K’s top 10 most lethal attacks, only two were conducted in 2018:

A small dissident segment of the IMU retained its allegiance to al-Qa’ida and the Taliban. The splinter group, which was announced on June 10 2016, denounced IS-K and claims the IMU brand.

Our data analysis encompasses the majority, but not all of IS-K attacks in Afghanistan and Pakistan. Furthermore, not all attacks have been precisely pint-pointed, some are estimated (district, city, neighborhood), given the sparse information released in the media.