Echoes of the Cold War: Why “Bears” Like the G.I.U.K. Gap

HARM
No Comments on Echoes of the Cold War: Why “Bears” Like the G.I.U.K. Gap

Russian military activity in the Greenland-Iceland-UK (GIUK) gap has increased exponentially in the past years. Launched from the Northern Fleet “bastion,” submarine-hunting, anti-surface, and maritime surveillance missions are at the…

Russian military activity in the Greenland-Iceland-UK (GIUK) gap has increased exponentially in the past years. Launched from the Northern Fleet “bastion,” submarine-hunting, anti-surface, and maritime surveillance missions are at the forefront of Russia’s sorties in the GIUK. These operations often come close to Norwegian, Icelandic, and British airspace, forcing NATO to scramble interceptors and shadow the visiting aircraft. With Russia’s newfound interest in the Cold War-era flashpoint, NATO is gearing up to level the playing field.

1.The Russian aircraft launch from air bases in the Kola Peninsula and travel south through the Barents and Norwegian Seas. During their forays, they regularly pass through NATO flight information regions (FIRs) without broadcasting their position or communicating with civil authorities. The Norwegian, Icelandic, and British FIRs have seen the most “visitors.” 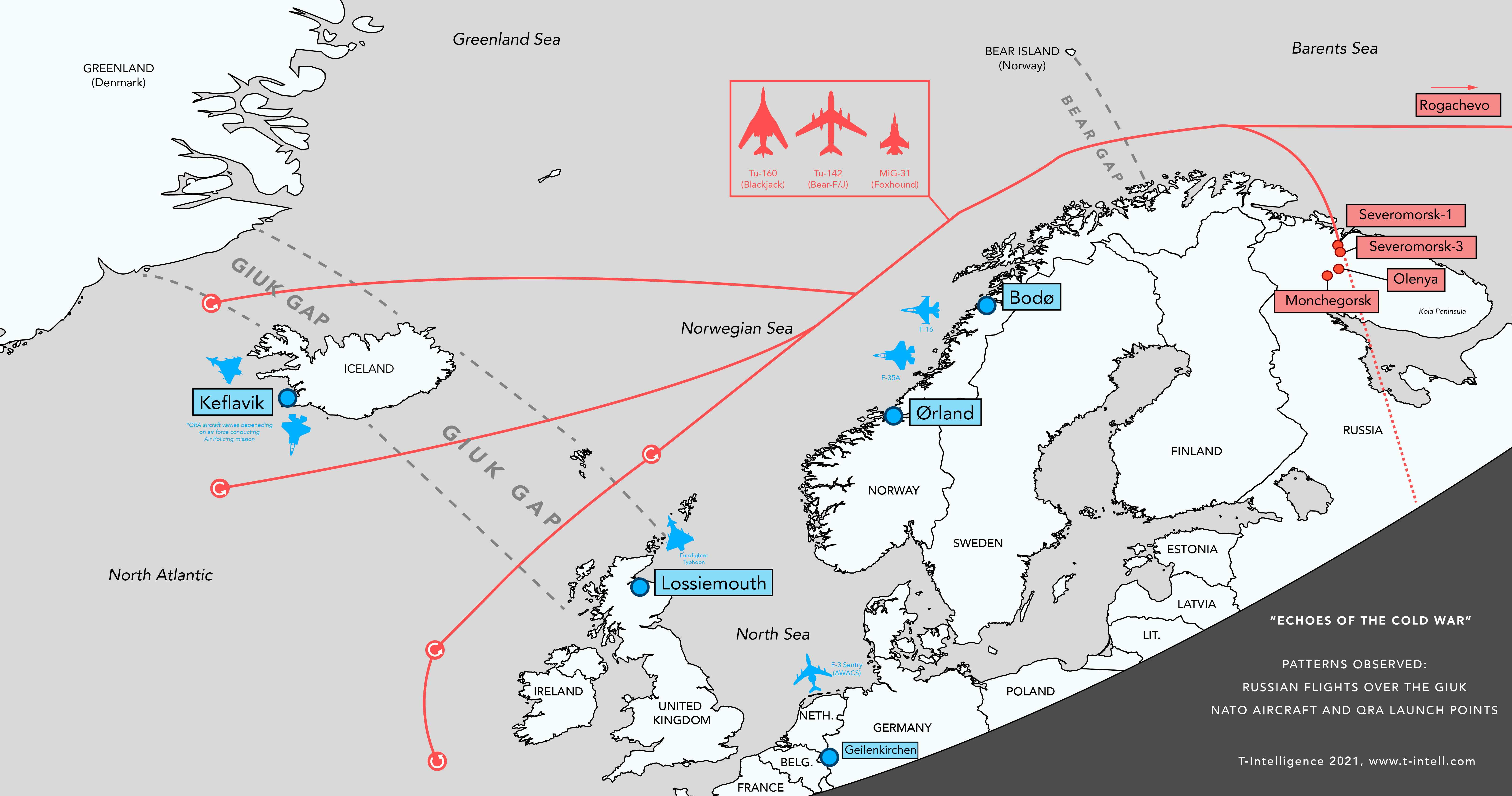 2.Airspace around the world is divided into Flight Information Regions (FIRs). Each FIR is managed by a controlling authority, which is responsible for ensuring that air traffic is deconflicted and safe.

3.Because of the flight path, the Royal Norwegian Air Force (RNoAF) is the first to detect and respond to Russian flybys. The RNoAF regularly scrambles F-16s and, more recently, F-35A stealth fighters from Bodø and Ørland to monitor and conduct visual identification of the visiting formations. As the Russians proceed southwards, the RNoAF hands the interception duties to other NATO forces.

4.The British Royal Air Force (RAF) scramble interceptors from RAF Lossiemouth, the air base responsible for defending the UK’s northern airspace. Lossiemouth’s Eurofighter Typhoons are on Quick Reaction Alert (QRA), which means they are ready to respond to any threat, at any moment – 24/7. T-Intelligence has frequently reported on RAF’s Lossiemouth successful interceptions of Russian aircraft in the past three years.

5.In many instances, Russian transited FIR corridors used by civilian airliners to enter and depart British airspace. In at least one situation, the British air traffic control (ATC) had to divert commercial flights to mitigate collision risk with the “incognito” Russian aerial formation.

For those wondering why the RAF shadowed Russian aircraft in international airspace west of Ireland yesterday, their routing cut straight across the routes taken by airliners crossing the North Atlantic (and the TU-142MR trails an antenna several kms long when talking to subs). pic.twitter.com/3QKx3ltT0W

Russians again? QRA Scramble?🚨🚨🚨 One @RoyalAirForce tanker heading north (#TARTN29) over #Scotland, shadowed by another tanker, but of @usairforce (#QID89), and a #NATO @E3AComponent AWACS (#NATO6) scrambled from #Geilenkirchen. Typhoons should up there too, over Shetlands? pic.twitter.com/jOzriZAQez

“THIS IS ̶N̶O̶T̶ A DRILL” 9.Judging by the airframe composition, the Russians primarily conduct anti-submarine warfare (ASW) exercises in the GIUK. ASW is the art of detecting, denying, and engaging enemy submarines. Airframes like the Bear Fs can drop buoys that survey the seas for submarines. Once detected, Bear Fs can transmit the targeting data to Russian submarines via Bear-J communication relay. The kill-chain also works vice-versa, with submarines indicating the enemy positions to Bear-Js that, in turn, relay them to surface ships and aircraft. Alternatively, Bear-Fs can be armed with anti-ship missiles and anti-submarine torpedoes, being able to prosecute enemy vessels without assistance. However, the latter option is less likely as the Russian Navy, as its Soviet predecessor, emphasizes the concept of combined forces – coordinated operations among surface, subsurface and aerial assets.

10.The presence of Blackjacks, which can carry and launch up to 12 cruise missiles, indicates that the Russians are also rehearsing anti-surface warfare (ASuW). This means that NATO bases in Norway, the UK, and Iceland and ports and vessels are on the mock-kill list. These objectives are essential for NATO’s Transatlantic sea lines of communications (SLOCs) – the strategic corridor linking North America to Europe.

11.Besides rehearsing specific mission profiles, Russian flybys in NATO flight information regions (FIRs) test the readiness, disposition, response time, and interception tactics of NATO QRA bases in the GIUK – RAF Lossiemouth (UK), Keflavik (Iceland), and Bodø and Ørland (Norway). While seemingly generic, this kind of intelligence is critical for any air force that wants to stay prepared for wartime operations.

12.To understand why the Russian military is conducting these flights – and, likely, covert sails – through the GIUK, we must examine the region’s importance to Russia’s overall naval strategy and disposition.

II.THE GIUK GAP: WHY IT MATTERS TO RUSSIA

13.The GIUK gap is a series of strategic routes between Greenland, Iceland, and the United Kingdom. The GIUK connects the North Atlantic to the Norwegian Sea and the Barents Sea – which is why it matters to Russia.

14. From a geographical perspective, the GIUK is a two-way street. While historically the Gap has favoured the defenders of the North Atlantic, forces moving towards the Norwegian Sea must also funnel through these waterways.

16.The importance of the NFMD stems primarily from its submarine force. More specifically, the Russian nuclear-powered ballistic missile submarines (SSBNs in the US Navy terminology), which continue to stir anxiety on both sides of the Atlantic.

17.At the height of the Cold War, the U.S. Office of Naval Intelligence assessed that the Soviet Northern Fleet would cut NATO’s Transatlantic sea lines of communication (SLOC) in case of war. But as open-source intelligence from the CNA later found, counter-SLOC was a low-priority mission for the Soviets, or it became so in the 1980s. The introductory comments from this declassified CIA report captures the growing realization among the U.S. intelligence community that “sea denial operations in the North Atlantic are not a high priority item for the Soviet naval efforts” (Director of Central Intelligence, Stansfield Turner in 1978). 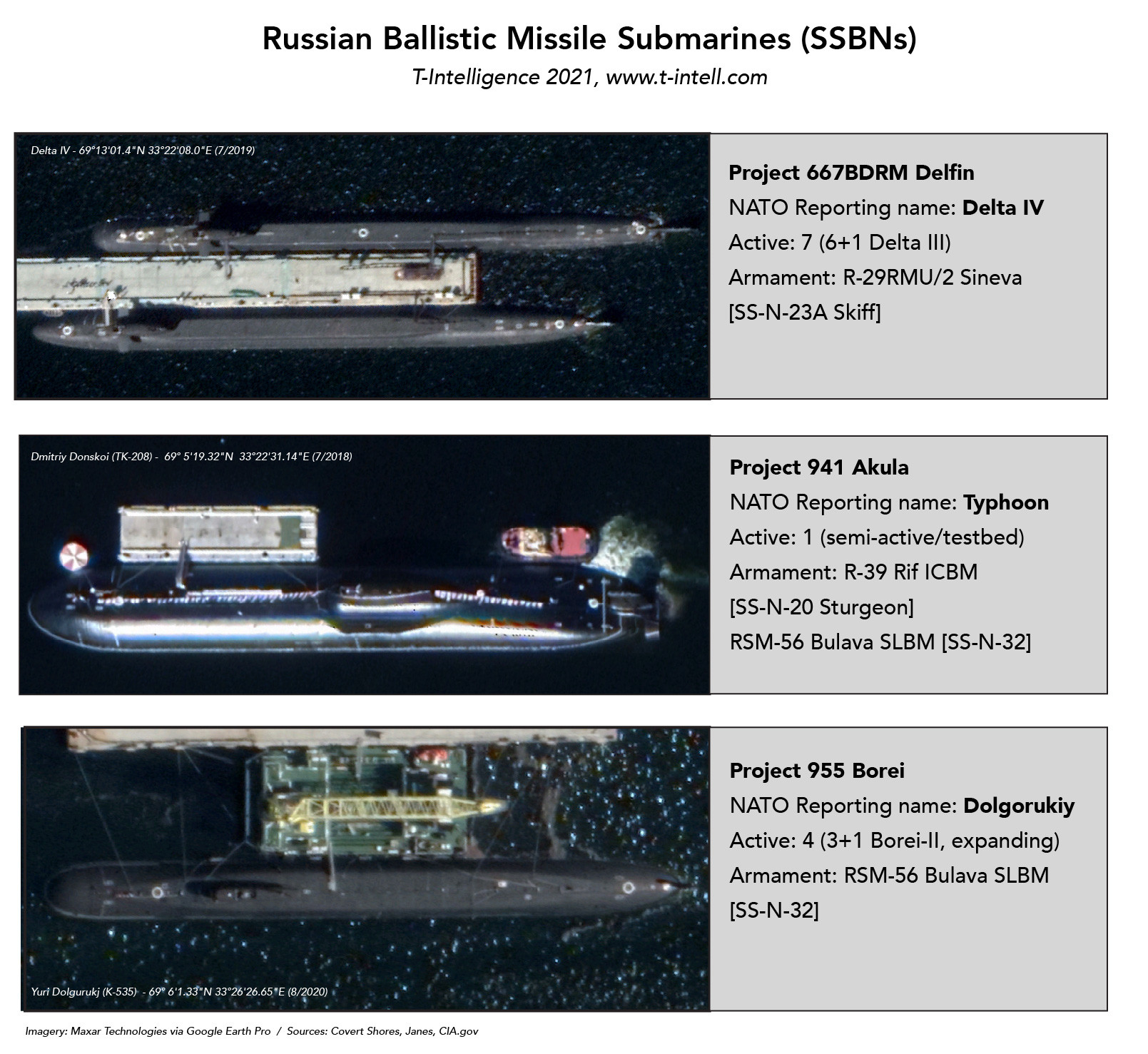 18.Instead of staging a battle for the Atlantic, the Soviets were primarily concerned with defending the Northern Fleet’s SSBNs. Capable of launching long-range nuclear attacks, the SSBN fleet was to be preserved as a second-strike capability following a limited nuclear exchange. This came to be known as the “withholding strategy” or the “pro-SSBN” mission.

19.To enhance SSBN survivability, the Soviets designed a multi-layered and all-domain concept known to the US intelligence community as Close Abroad Bastion (CAB), or simply “bastion.” Bastions were intended to prevent NATO submarines from infiltrating the SSBN area of operations such as the Bering Sea or the Arctic Ocean, where Soviet submarines would hide underneath the polar ice caps, and surface when needed to fire. As periodically demonstrated, Russia’s submarines are still able to surface from under the thick arctic ice.

(The video below shows a Russian submarine ice exercise that took place near Alexandra island, in the Franz Joseph archipelago on 26 March 2021).

20.The bastion concept called for the wholesale mining of the sea approaches, hunting enemy submarines with a combination of ASW aircraft, attack submarines, and warships, and lining up friendly shores with coastal defense batteries.

21.The Soviets established two bastions, one in the Sea of Okotoks (Soviet Pacific Fleet) and another in the Barents Sea (Soviet Northern Fleet). In 1988, the U.S. Navy intelligence estimated that only 25% of the Northern Fleet would not have been dedicated to the pro-SSBN mission in case of war (see page 53). 22.In response to the bastion strategy, the U.S. Navy launched a series of operations to infiltrate Soviet bastions and keep tabs on the Northern Fleet’s submarines around the clock. On 20 March 1993, an American submarine and a Russian SSBN collided off the Kola peninsula, underscoring just how easy it was for the U.S. Navy to infiltrate Russia’s bastions. The international incident forced both the U.S. and Russia to rekindle their submarine “cat-and-mouse” tactics.

26.As the vast majority of these new toys will be in service with the NFMD, Russia has started paying more attention to the GIUK. Russia must closely surveil the GIUK Gap to mitigate and deny enemy infiltrations. This explains the periodic NATO interceptions of Russian maritime patrol and ASW aircraft in this area. 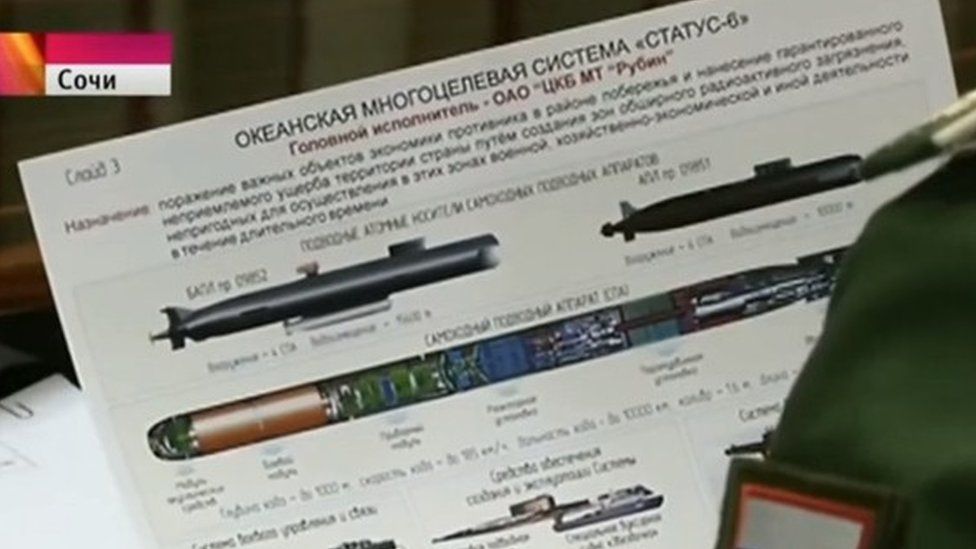 28.Russia also prepares to contest the GIUK in case of war. Therefore, Russia’s assertive behavior in the GIUK can be interpreted as a form of active forward-defense of the bastion concept, which inevitably entails anti-surface warfare against British, Norwegian, and American forces.

29. Another reason for Russia to consider forward-defense in the GIUK is the threat posed by NATO stand-off weaponry. For example, a Tomahawk land-attack cruise missile can be fired from 1,600 km away (Block IV), meaning that Russian forces must intercept enemy launch platforms earlier and at a greater range.

30.Besides its role for forward defense, the GIUK gap remains a strategic chokepoint for Russia to move warships into the North Atlantic. As outlined in its 2015 maritime strategy, the Russian Navy must ensure the “free access of the Russian fleet to the Atlantic.”

III. NATO COUNTERMEASURES: BACK TO THE FUTURE

32.As Russia’s activities in the High North increased, the Bastion concept, the SSBN threat, and the GIUK dilemma re-emerged on NATO’s agenda. The Alliance and member states have undertaken a series of measures to curtail Russia’s revanchist designs in the GIUK gap and the Arctic.

#ICYMI: The Seawolf-class fast attack submarine #USSSeawolf (SSN 21) conducted a brief stop for personnel in the Norwegian Sea off the coast of Tromsø, Norway. Seawolf is currently deployed to the @USNavyEurope area of operations.
Read more about it here: https://t.co/USQmddrUON pic.twitter.com/GQZoRhoKgR

Russian flights and sails through the GIUK will persist as a form of forward-defense of its Barents Sea bastion. Russia must also maintain a foothold in the NATO-dominated waters around the UK and Iceland to secure access into the North Atlantic for peacetime and combat operations, unconventional warfare, and other objectives.

The age of anti-submarine warfare in the High North is back.

This strategic analysis was enabled by Open-Source Intelligence (OSINT). Now you can learn OSINT too! Head over to Knowmad OSINT and check out our training offer.

END_OF_DOCUMENT_TOKEN_TO_BE_REPLACED
No Comments on Echoes of the Cold War: Why “Bears” Like the G.I.U.K. Gap