A medical complex in the southern city of Mariupol, Ukraine, has been destroyed in a reported airstrike on 9 March 2022, social media videos show. It is virtually certain that…

A medical complex in the southern city of Mariupol, Ukraine, has been destroyed in a reported airstrike on 9 March 2022, social media videos show. It is virtually certain that Russia has conducted the attack. Russian forces have encircled the city since 1 March, uniting advancing forces from Crimea with those in Donetsk oblast, and enjoy local air superiority. Since the pincer move was completed, Russian troops have resorted to unrestricted, punitive strikes to force the Ukrainian soldiers and population in Mariupol to surrender.

Russia destroyed a childrens and maternity hospital in Mariupol. Casualties are unknown. This is so outrageous and Putin’s war criminals continue to strategically target children, women, elderly pic.twitter.com/we0eoOEKcP

Mariupol. Direct strike of Russian troops at the maternity hospital. People, children are under the wreckage. Atrocity! How much longer will the world be an accomplice ignoring terror? Close the sky right now! Stop the killings! You have power but you seem to be losing humanity. pic.twitter.com/FoaNdbKH5k

Eyewitnesses report that the strike was carried out by aircraft. The blast carved a giant crater in the middle of the medical complex, which the New York Times estimates to be 10 feet deep. If the attack was air-launched, Russia likely employed a FAB-series air-dropped bomb, likely FAB 500 (the numbers indicate its mass in kilograms). Russia has already used FAB 500 bombs in Chernihiv, including against residential areas. The possibility of a surface to surface attack also exists, however, one single artillery shell is unlikely to have caused this impact mark. No weapon debris has been documented so far.

Just try and realize this.
Russia today dropped a 1000-kilogram airbomb in downtown Mariupol.
In a location between a hospital and birthing center.
Just because it can. pic.twitter.com/iH4NgvfwXF

A regional official told Ukrainian media that 17 people were injured, including staff and patients. No deaths have been reported so far, according to Pavlo Kyrylenko, the head of the Donetsk regional administration, as quoted by Interfax.

Geolocation confirms that the building complex seen in the footage is indeed a medical facility, appearing as Dytyacha Konsul’tatyvno-DIahnostychna Poliklinika (translates in Children’s Consulting and Diagnostic Polyclinic) on Google Maps, located in Mariupol. As photos and open source information indicate, a maternity ward is also part of the medical complex.

It is possible that Russia deliberately targeted this facility as part of its siege tactics. As extensively seen during Russia’s siege operations in Syria, Russian forces purposely target medical facilities to deprive the local population and defenders of healthcare and other key services. Such attacks also serve a psychological purpose: to terrorize the population into submission. Thrown into a humanitarian disaster, an attrited population and defending force are less capable of combat and more likely to surrender.

The hospital attack is just one of the many strikes that Russia has conducted on Mariupol on 9 March, as it tries to seize the city. Maxar’s very high-resolution satellite imagery reveals the extent of damage caused by Russian shelling in the past 24 hours. As the photos show, residential homes, apartment complexes, and shopping centers have been badly damaged and destroyed. The deliberate targeting of shopping centers that include hypermarkets and other large grocery stores aims to create a food shortage. This is another siege tactic that the Russian military uses to deteriorate living conditions and force a surrender. 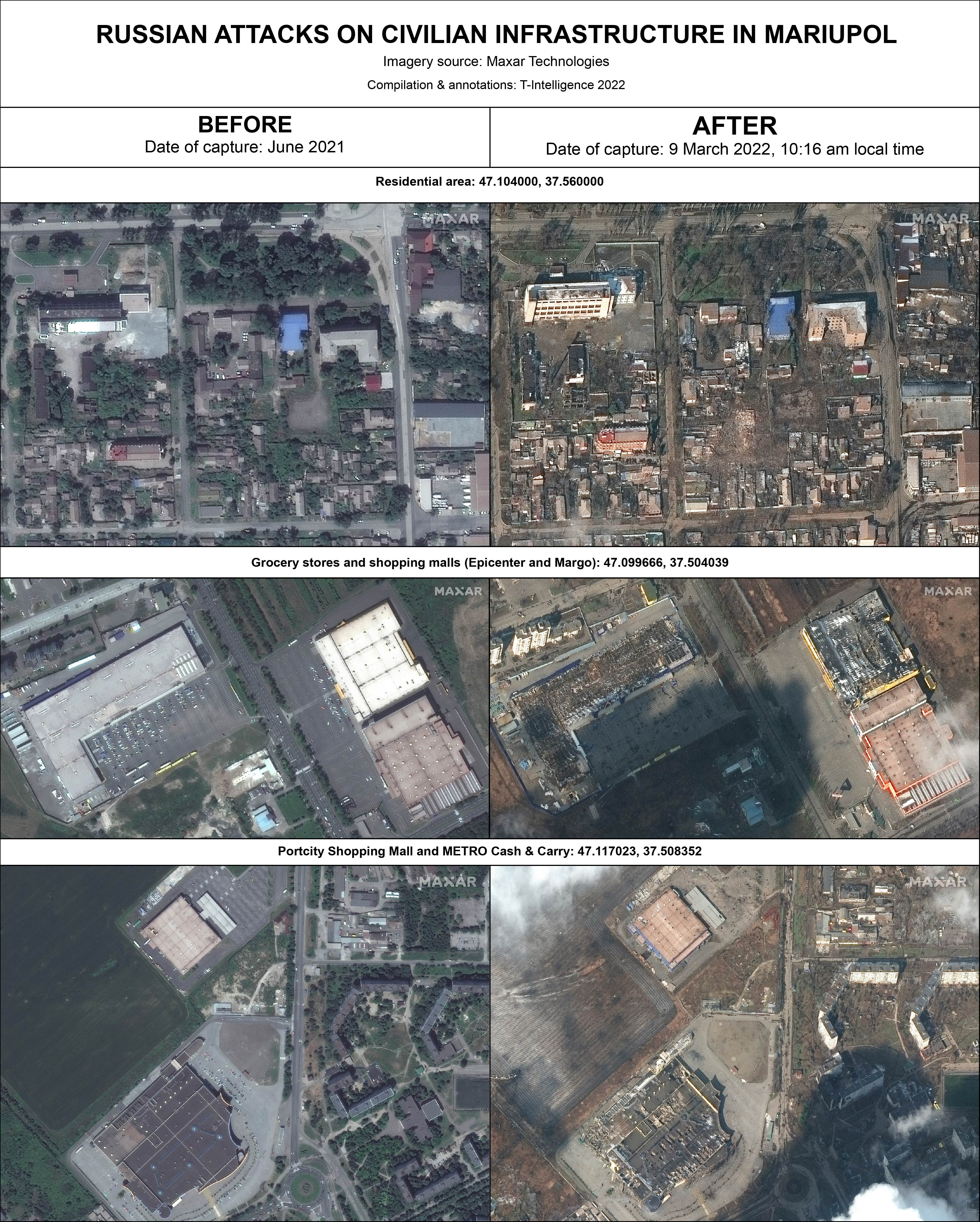 Mariupol was under a limited ceasefire negotiated between Ukraine and Russia on Sunday to allow evacuations. However, Russia has breached the ceasefire by shelling the humanitarian corridors, stalling the evacuation in the process.

The collapse of Mariupol will enable Russia to link Crimea with the separatist territories in Donbas by land, which has likely been a Russian aim since the 2014 Donbas offensive. Back in 2014-2015, Mariupol represented the maximum point of advance of the Russian military during the Donbas offensive. Ukrainian forces managed to stop the Russian advance and keep Mariupol.

Russian control of Mariupol will also leave Ukraine without access to the Azov Sea, as Russia has already captured 99% of the coastline.

Armenia’s Prime-Minister Nikol Pashinyan shocked the Russian Defense Ministry when he complained about the Iskander-E missile system’s ineffectiveness in a public interview (23 February 2021). PM Pashinyan said that the Iskander missiles launched during the short war with Azerbaijan over the Nagorno-Karabakh region “didn’t explode or maybe 10 percent of them exploded.” When asked why the Iskander disappointed, Pashniyan hinted at the missile’s old age: “I don’t know… maybe they were weapons from the ‘80s.”

In response to Pashiynan’s claims, Russia has released a video montage showing two successful Iskander strikes – both ballistic and cruise missile variants – in Syria. But instead of clearing the Iskander’s name, Russia has inadvertently proved that it has targeted hospitals – an allegation that Moscow has perpetually disputed despite evidence to the contrary from open-source investigations (e.g. New York Times) and even the United Nations (UN).

The second clip from the compilation shows an Iskander missile hitting an H-shaped building. Twitter user and geolocation wizard @obretix identified the target as a hospital in Azaz, near the Turkish border. While the footage is undated, the attack seems to match reports from early 2016 about an unclaimed strike on Azaz hospital.

An Airwars assessment from 19 January 2016, quoting two Syrian sources, informs: “Russian forces targeted the town of Azaz with two ballistic missiles, causing the death of one civilian and injury of several others.”

A Reuters report from 15 Feb 2016 similarly mentions an unattributed missile strike on a “hospital and school sheltering refugees in Azaz, Syria,” quoting local residents and medics. A Physicians Across Continents (PAC) Facebook post corroborates the Reuters report and describes an airstrike on Azaz hospital.

Sentinel-2 satellite imagery from that time is sparse and does not cover every day. However, when comparing imagery from 17 January vs. 16 February, there seems to be a “splash” mark on the impact area seen in the footage. 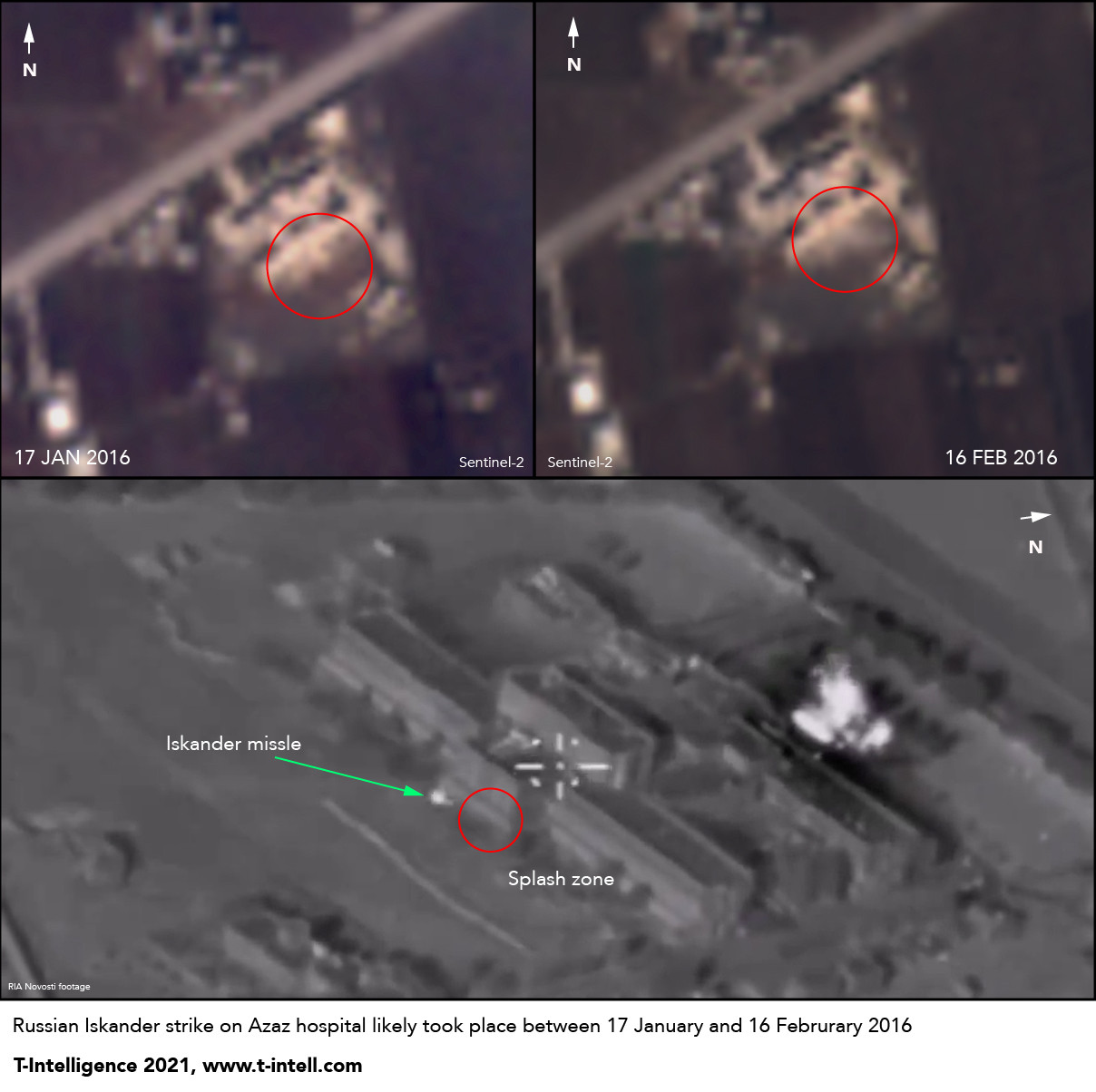 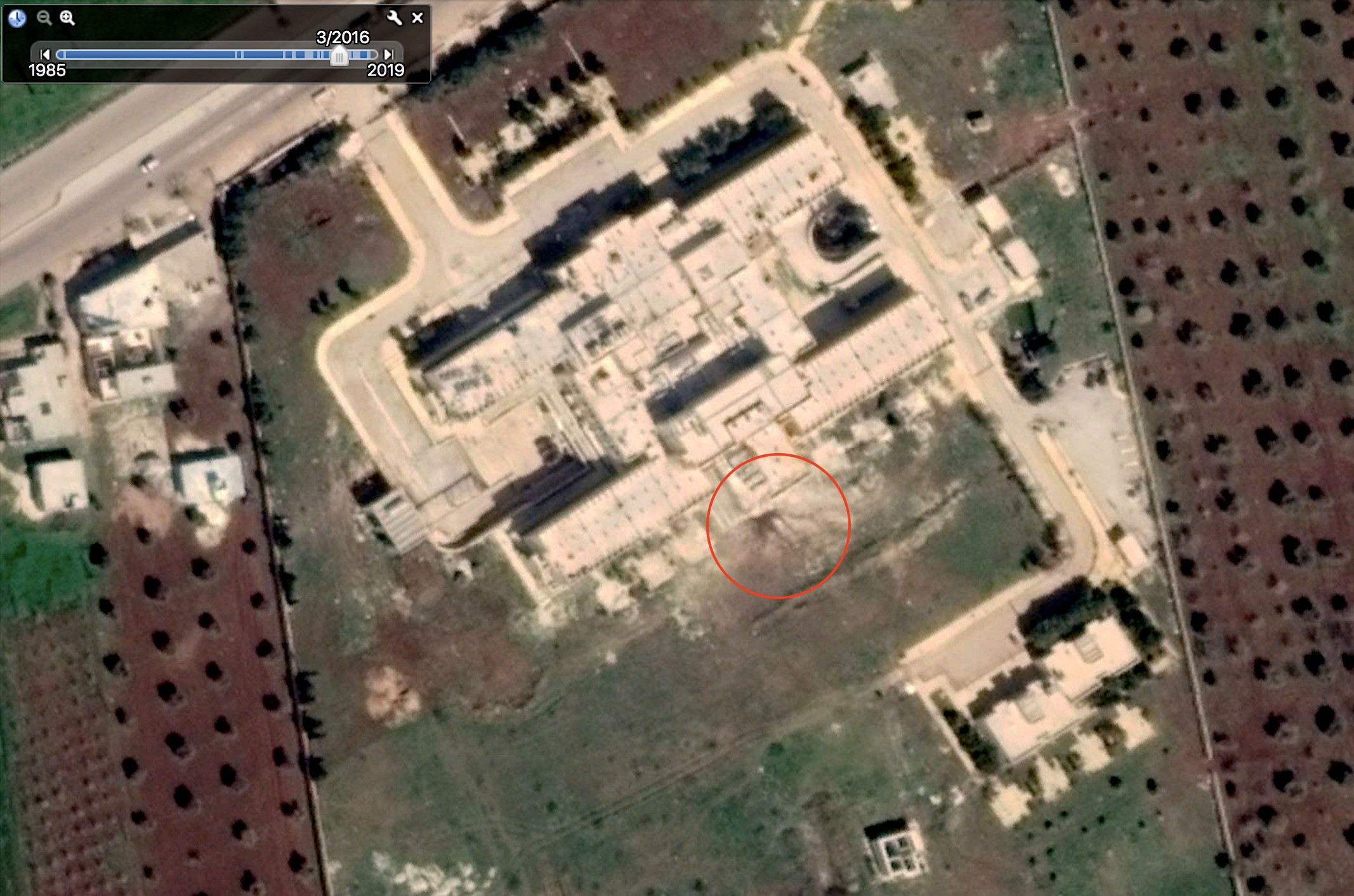 In conclusion, Russia’s Iskander attack on the hospital took place before mid-March 2016, and very likely between 17 January and 16 February.

Turkey has since repaired and renovated the hospital, and it is now functional again.

Turkey has build up a major hospital in Syria’s Azaz paid by the Turkish tax payers.

The doctors and nurses in the hospital are Syrian and Turkish, paid by Turkey.

But Turkey does not get credit for it 🤷‍♂️ pic.twitter.com/iIziurOwsy

The Iskander is not the first Russian system that is publicly scrutinized. Observers, including T-Intelligence, have noted the ease with which Turkish drones managed to hunt down Russian-made Pantsir aerial defense systems in Syria and Libya. The Russian Defense Ministry is growing increasingly defensive about the effectiveness of its capabilities. However, with this latest “public relations” stunt, Russia has foremost proven that it bombs hospitals, not that the Iskander-E works.