On March 23, 2019 the Syrian Democratic Forces (SDF) announced the liberation of Baghuz al-Fawqani, the “Islamic State of Syria and Iraq’s” (ISIS/Da’esh) last stronghold in Syria’s Mid-Euphrates River Valley (MERV). The victory marks the end of the terror group’s physical caliphate, which once stretched from central Iraq to northwestern Syria and encompassed almost 10 million people. The remaining Da’esh fighters (Iraqi, Syrian, and foreign terrorist fighters/FTFs) made their last stand in a in a pocket of four square kilometers, consisting of a makeshift tent camp, desolated houses, and underground tunnels.

As the conventional campaign ends, the post-physical-caliphate era begins with 10,000-20,000 Da’esh fighters on the loose across Syria and Iraq, ready to resurge at the right time, while their wives and children guarantee a transgenerational survival of the jihadist struggle.

1. The battle for Baghuz al-Fawqani began in late December 2018. The offensive marked the last phase of Operation Roundup (OR), a joint effort of the Syrian Democratic Forces (SDF) and the Combined Joint Task Force Operation Inherent Resolve (CJTF-OIR) to clear the MERV and the Syrian-Iraqi border from Da’esh remnants.

2. OR was spearheaded by the SDF’s Deir ez-Zor and al-Hasakah local Arab Sunni affiliates, the Syrian Arab Coalition (SAC), and the Deir ez-Zor Military Council (DMC). When the offensive stagnated in late 2018, the SDF was forced to deploy the battle-hardened Manbij Military Council (MMC) and the Kurdish YPG militia – the PKK’s Syrian affiliate – from Raqqa and the Kabur valley to finish the job. YPG-led operations were however repeatedly halted due to Turkish cross-border attacks in northern Syria.

3. The U.S.-led Coalition/CJTF-OIR continued to assist the SDF with advisors, special operations forces (SOF), artillery and air support. The Coalition’s Combined Air Operation Center (COAC) based in al-Udeid air base (Qatar) employed a variety of aircraft for close air support (CAS), based on targeting data from SDF-embedded forward air traffic controllers/SOFs. While CJTF-OIR statements only mention the F-15C*, IMINT shared by twitter user @obretix and SOCMINT reports also indicate the presence of the following aircraft:

4. The Iraqi Security Forces (ISF), U.S. and French infantrymen furthermore assisted the SDF with cross-border artillery fire from Fire Base Shaham (near al-Qa’im, Iraq) and other combat outposts in the MERV. ISF and select Popular Mobilization Forces (PMF) deployed on the Iraqi-Syrian border to prevent Da’esh fighters from escaping to Iraq.

5. Pro-government forces stationed in Al Abukamal blocked the western escape route from Baghuz. While it is unknown whether the Syrian Arab Army coordinated with the Coalition or the SDF, the pro-government forces engaged Da’esh fighters who attempted to cross the Euphrates river and escape into the desert.

6. Despite the high-number of airborne ISR platforms and intense SIGINT and GEOINT collection efforts, the CJTF-OIR and SDF have consistently been mistaken about the enemy and civilian presence in the Baghuz pocket.

#VIDEO The Islamic State group fighters and their families have been cornered on a tiny patch of land in #Syria on the edge of the Euphrates River near Iraq pic.twitter.com/yeRh0rTqth

7. The initial estimate of the enemy’s order of the battle (January 2019) was between 600 and 1,400 fighters, shielded by over 2,500 civilians. After the evacuation of the Baghuz pocket, the SDF nevertheless estimated that 1,600 Da’esh fighter were killed and 25,000 civilians left the enclave. The intelligence failure repeatedly delayed the ground assault and allowed Da’esh to go on the offensive:

a. Da’esh exploited the considerable civilian presence to complicate and deter air strikes.

b. Starting in mid-February, the SDF and Da’esh struck a number of deals that facilitated the exit of non-combatants (wounded fighters, spouses, children and captives) from Baghuz. This forced the SDF to pause the military offensive and organize the flow of refugees to the al-Hawl internal displaced people (IDP) camp (Hasakah province). The main screening points were established east of the riverside tent camp on the SDF-held Jabal Baghuz, a 240 m high cliff. Testimonies from aid workers suggest that no party was expecting or prepared to face such a challenge.

8. A second CJTF-OIR/SDF intelligence failure was to believe that the besieged Da’esh fighters would quickly surrender to avoid a “bloodbath.” To keep their own losses to a minimum, the CJTF and SDF pursued a strategy of “bombing Da’esh into surrendering.” However, this expectation was not only unrealistic (based on previous battles and lessons learned), but also counterproductive, as it provided Da’esh with immense propaganda potential to divinize their “last stand.”

9. When the SDF resumed ground operations on March 11, Da’esh met the advancing force with rocket-propelled grenades, mortar attacks, sniper fire and suicide vehicle-borne  improvised explosive device (VBIED). A number of female fighters/Da’esh wives engaged in firefights with the SDF. Even when the SDF was “in the wire,” the jihadists barricaded themselves in tunnels and continued with suicide attacks on the surface.

#BREAKING: SDF proclaimed victory over #Baghuz and the end of #ISIS‘ physical caliphate. Here’s a timelapse via @planetlabs showing how the last battle unfolded (January 7 vs. February 5 vs. March 20, 2019).

DA’ESH IS NOT DEFEATED

10. Although the physical caliphate has been 100% liberated, Da’esh still poses a lasting threat to regional and international security. U.S. Central Command (CENTCOM) estimates that absent counterinsurgency pressure, Da’esh will likely resurge in Syria within six to twelve months and regain limited territory in the MERV.

a. Da’esh maintains a residual presence of over 20,000 fighters in Syria and Iraq. Da’esh still controls remote and sparsely populated areas both states. The jihadist ranks consist of senior leaders, fighters and facilitators. The group also operates sleeper cells in cities, which are capable of conducting targeted assassinations and mass casualty attacks. Ultimately, the dispersed Da’esh fighters are working towards overhauling their transnational networks and regaining an offensive military capacity. 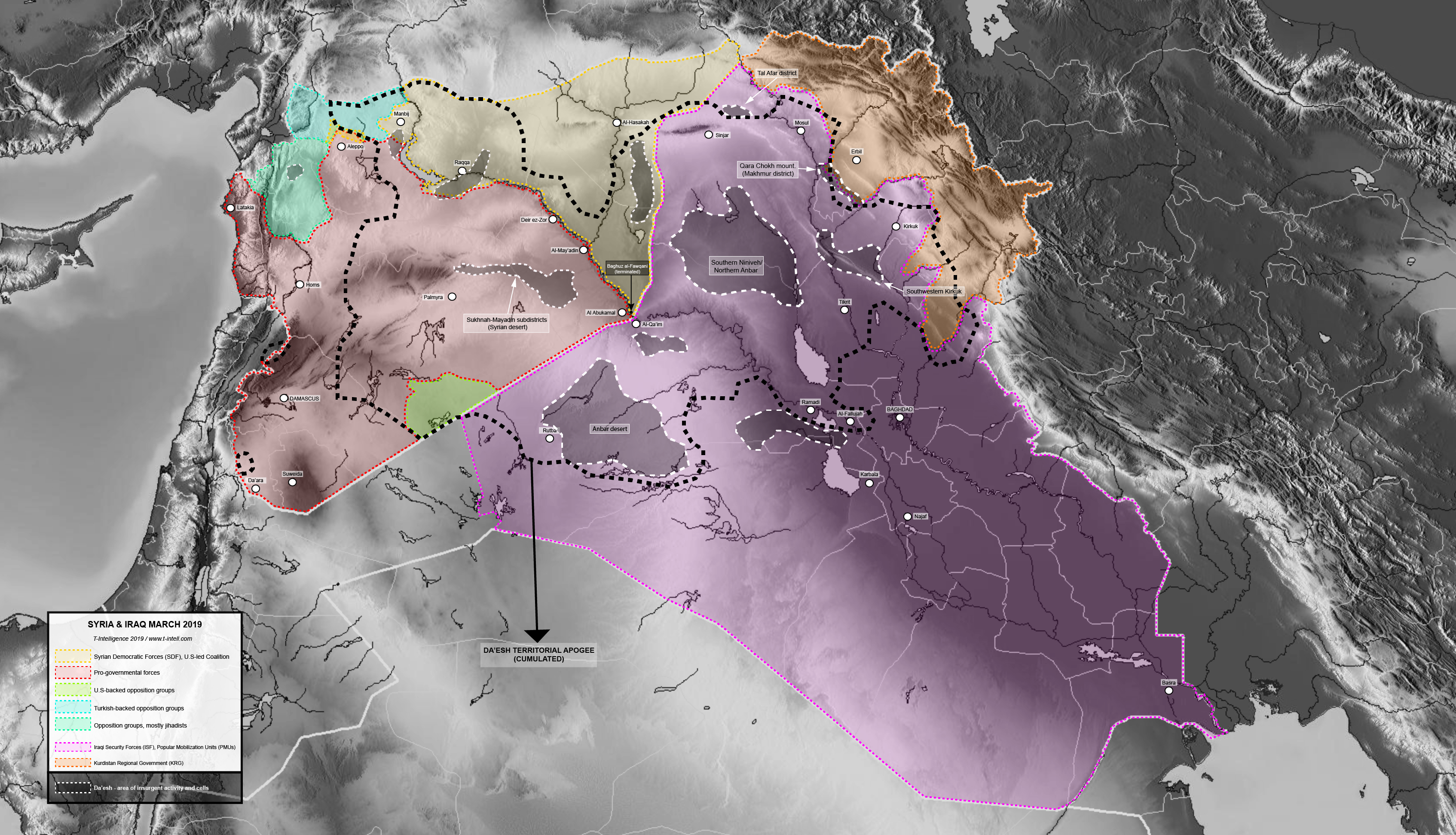 Syria and Iraq Situation map as of March, 2019 via T-Intelligence

b. The situation in Al Hawl IDP camp poses a critical threat for post-caliphate stabilization efforts. Al-Hawl has been overwhelmed by the influx of non-combatants from Baghuz. The 25,000 new inhabitants mostly consist of Da’esh fighters and their families, who remain unrepentant and radicalized. As assessed by U.S. CENTCOM General Joseph Votel, the large-scale surrender in Baghuz “is not the surrender of ISIS as an organization but a calculated decision to preserve the safety of their families and the preservation of their capabilities by taking their chances in camps for internally displaced persons and going to ground in remote areas and waiting for the right time to resurge.” Like its predecessor organization Al-Qaeda in Iraq, Da’esh will likely attempt to destabilize or attack camps and prisons in order to replenish its ranks with battle hardened fighters. Da’esh-affiliated media are already calling for attacks on SDF positions all over Syria.

Al-#Hawl IDP camp (Syria) almost doubled in size since Dec. 2018. Over 72,000 people are settled there, exceeding by far the maximum capacity of 50,000. Over 20,000 IDPs (many #ISIS families) came in the last 3 months during the battle for #Baghuz. pic.twitter.com/QzCkGBLYlB

c. Foreign Terrorist Fighters (FTFs) have proven to be the group’s die-hard element in the battle for Baghuz. If allowed to return to Europe/North America, they will pose an immediate threat to their home countries. However, due to the lack of evidence necessary for valid convictions, Western governments prefer to leave FTFs in SDF custody (short-term solution) or have them transferred to the Iraqi authorities (for conviction).

11. CJTF-OIR will gradually disengage from major military operations and reduce the troop count from 2,200 to 400 in Syria. In this last operational phase, CJTF-OIR will provide security, planning and support to the Iraqi government and appropriate authorities in Syria to prevent Da’esh from resurging. CJTF-OIR can be expected to keep air-land ISR and CAS assets in Iraq and prosecute high-value targets using SOFs and UAVs.

Due to operations security (OPSEC) CJTF-OIR does not report the number or type of aircraft employed in operations, the number of munitions dropped in each strike, or the number of individual munition impact points against a target.

YPG social media accounts refer to the battle for Baghuz as Operation Fight Terrorism and to the MERV offensive as Operation Jazzira Storm.