Analyst
Comments Off on Pride of Belarus: Baranovichi 61st Fighter Air Base [GEOINT]

The 61st Fighter Air Base in Baranovichi is Belarus’ most westwardly and strategic military airfield. Using open-source GEOINT we identified an array of fighter jets and air defense capabilities at…

The 61st Fighter Air Base in Baranovichi is Belarus’ most westwardly and strategic military airfield. Using open-source GEOINT we identified an array of fighter jets and air defense capabilities at Baranovichi air base (AB) that helped us understand the intentions and capabilities of the Belarusian Air Force and Air Defence Forces (BAFADF). Baranovichi AB is also central to Belarusian-Russian military cooperation and bears significance to Lukashenko’s grip on power, as the recent hijacking of flight FR4879 showed.

Two kilometers south of Baranovichi, a city in the Brest region, lies Baranovichi air base (AB). Built by the Soviets in the 1940s, Baranovichi AB was expanded significantly throughout the Cold War to house large numbers of fighter jets and bombers. However, the airfield has remained relatively unchanged since the newly independent Republic of Belarus assumed control in 1991. Only minor renovations and hardware upgrades took place over the last ten years.

The Belarusian Air Force and Air Defence Forces’ (BAFADF) designation for Baranovichi airfield is the 61st Fighter AB. While the BAFADF uses the base for predominantly deploying fighter jets, guarded by surface-to-air missile (SAM) systems, Baranovichi AB offers significant aircraft repair capabilities through the 558th Aircraft Repair Plant. The air base is currently under the command of Belarusian Colonel Yuri Pyzhik, according to InformNapalm. GEOINT: Overview of Baranovichi AB based on Maxar Technologies imagery from 4 October 2020.

In recent years the Lukashenko regime has been more vocal in pushing the narrative of Western aggression against Belarus. The country’s most recent military policy statement, the Defence Plan for 2020-2024, even underscores the prevention of external military aggression against Belarus. With Lukashenko calling for Russia to deploy planes to Belarus, the 61st Fighter Air Base will be of growing interest to NATO.

Nearly 140km from NATO member Poland (and 110 km from Lithuania), Baranovichi AB is on similar longitude lines as Kaliningrad exclave – Russia’s westernmost territory. The combination of Baranovichi and Kaliningrad provides a two-pronged forward front from where Belarus and its ally, Russia, could launch joint airstrikes deep into the Europan theater in case of conflict with NATO. Baranovichi AB became famous due to the recent hijacking of Riyan Air flight FR4879 and the subsequent apprehension of a journalist in late May 2021. The Belarussian MiG-29 that shadowed the Riyan Air flight and forcefully diverted it to Minsk scrambled from Baranovichi AB. Besides external posturing, it is clear that the Lukashenko regime will not hesitate to use the BAFADF – aircraft and air bases – for domestic state control.

Given the importance of the 61st Fighter Air Base, an assessment of the base is vital in understanding Belorusian military capabilities.

Geospatial Intelligence (GEOINT) analysis of aircraft and other hardware in Baranovichi AB is based on Maxar Technologies imagery from 2020 accessed via Google Earth Pro.

The BAFADF’s most advanced jet identified at the 61st fighter air base, and in its entire fighter fleet, is the Sukhoi SU-30SM (AFIC/NATO reporting name: Flanker-C). This significantly upgraded variant of the SU-30 offers enhanced radar, weapons capabilities, and communication systems. Fitted with modern N011M Bars radar equipment with a significant detection range of 400km and similarly offering in-air radar jamming capabilities, they are a formidable foe to NATO forces. They are a well-rounded jet suited to both air-to-air combat as well as air-to-surface strikes. Moreover, their range of 1,500km and 3.5hr refuel time poses a threat deep into NATO territory. 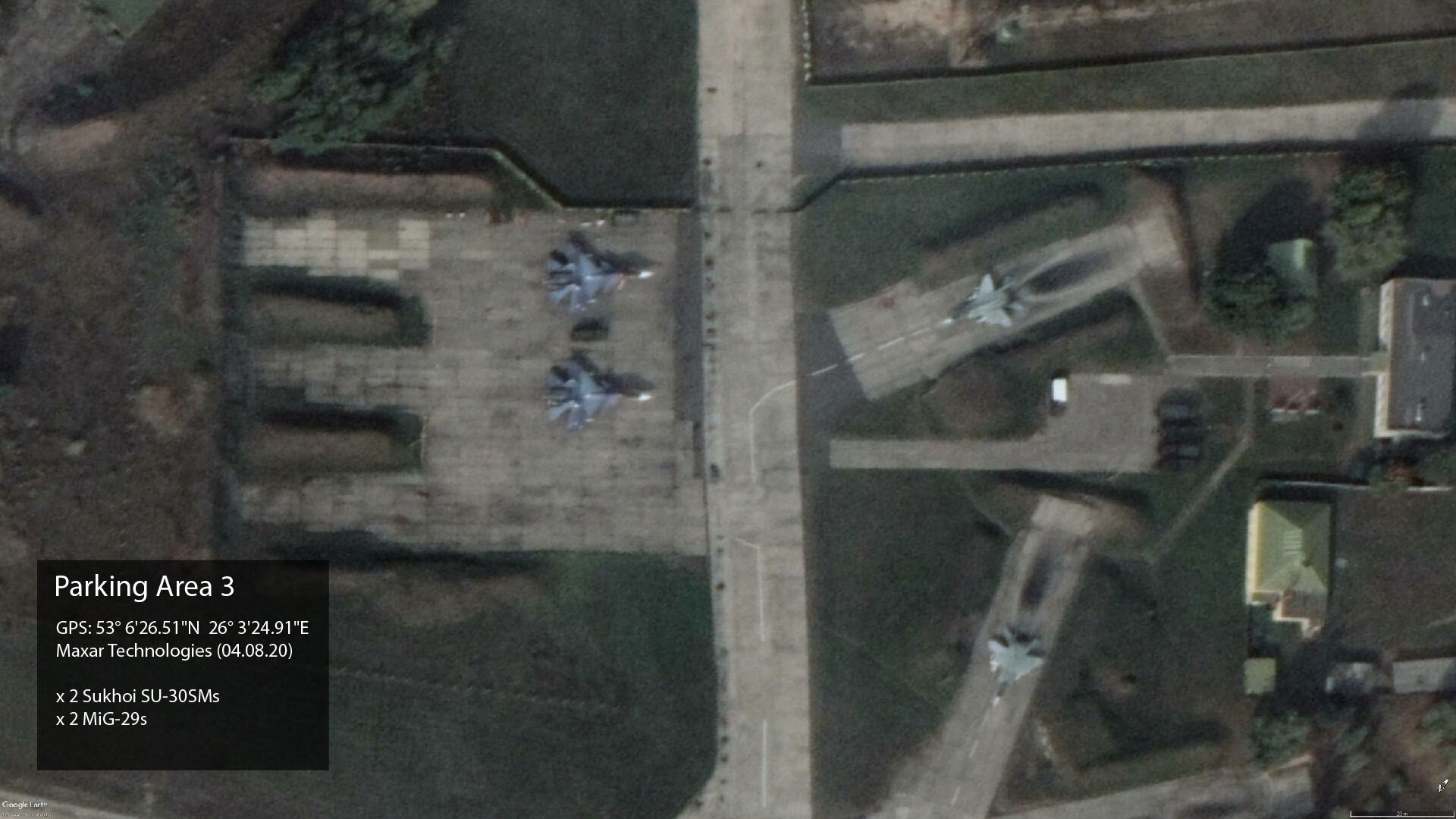 Two new navy and blue camouflage SU-30SMs are visible on the west side of the complex. Belarus has ordered a dozen of these advanced fighter jets from Russia.  Four Su-30SMs are currently in service with the BAFADF with eight to be delivered in the near future. 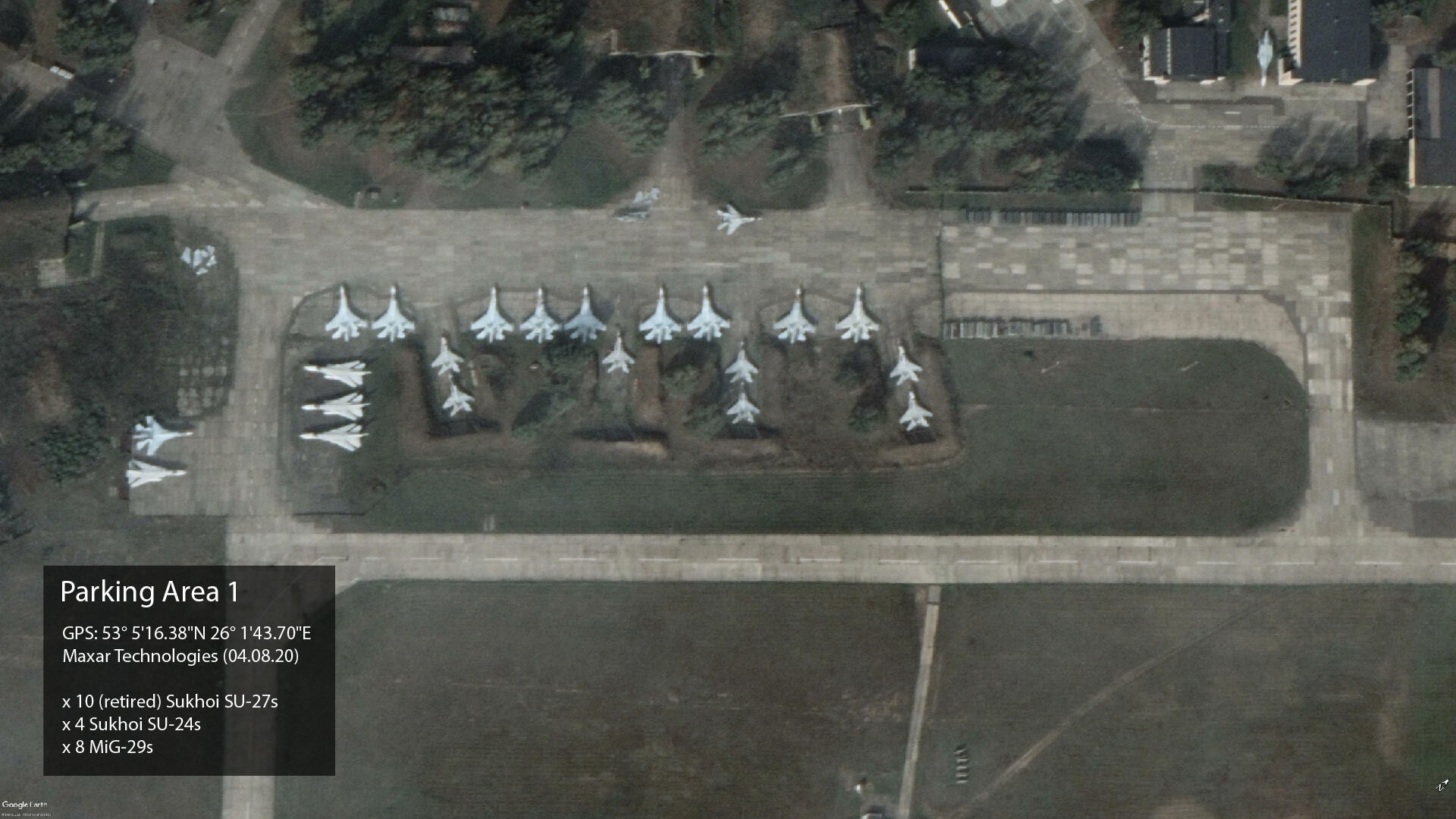 “Parking Area 1” hosts an assortment of aircraft including Su-27s, Su-24s and MiG-29s

Belarus retired the SU-24Ms, but as Bellingcat reported in 2015, they are likely to be upgraded or sold. Due to their retirement, the Baranovichi Air Base lacks powerful air to surface missile capabilities and is primarily a fighter base.

Multiple Sukhoi SU-27s (NATO reporting name: Flanker) can be identified in the 61st Fighter Air Base, despite their being retired in 2013 due to high operational costs. It can be estimated that these fighter jets will be upgraded and sold to other Commonwealth of Independent States (CIS) through the 558th Aircraft Repair Plant (558th ARP) situated just north of the 61st Fighter Air Base. 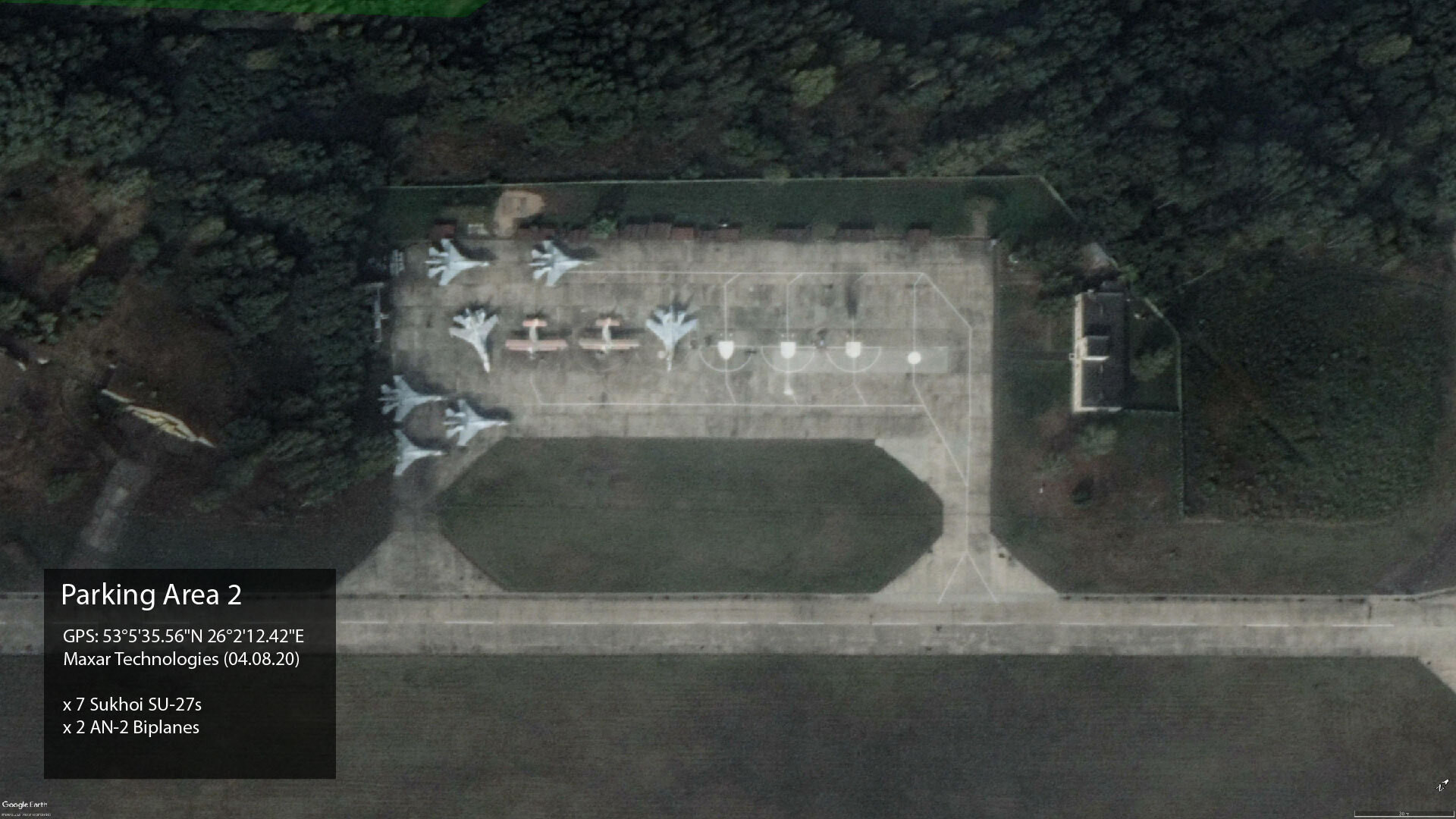 The 558th ARP sits north of the airstrip, connected to the broader airfield complex. The plant offers a wide spectrum of services from repairs to the complete overhauling and modernisation of a range of aircraft from Sukhoi’s SU-22s and SU-30s to attack helicopters and AN-2 aircraft. 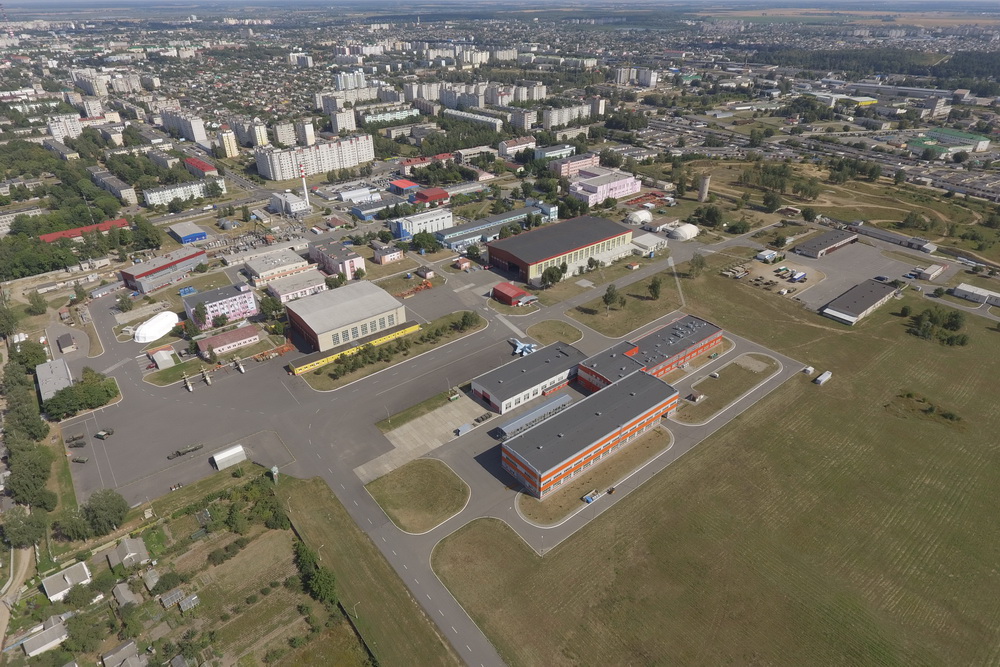 The 558th ARP is critical for the maintenance and repair of Belarusian military aircraft. The plant is also of significant international importance in promoting relations with its CIS allies and has provided numerous overhauls to the air forces of Angola to Syria and Russia, highlighting the international scope of the airbase. Its status of providing quality-assured overhauls develops not just its military reputation but also its technical reputation abroad.

Multiple radar installations are deployed across the base, including the mobile, 3-D, jamming-proof Protivnik-GE. This radar provides telemetry for fighter jets and can network with nearby SAM systems and other integrated air defense (IADS) assets. 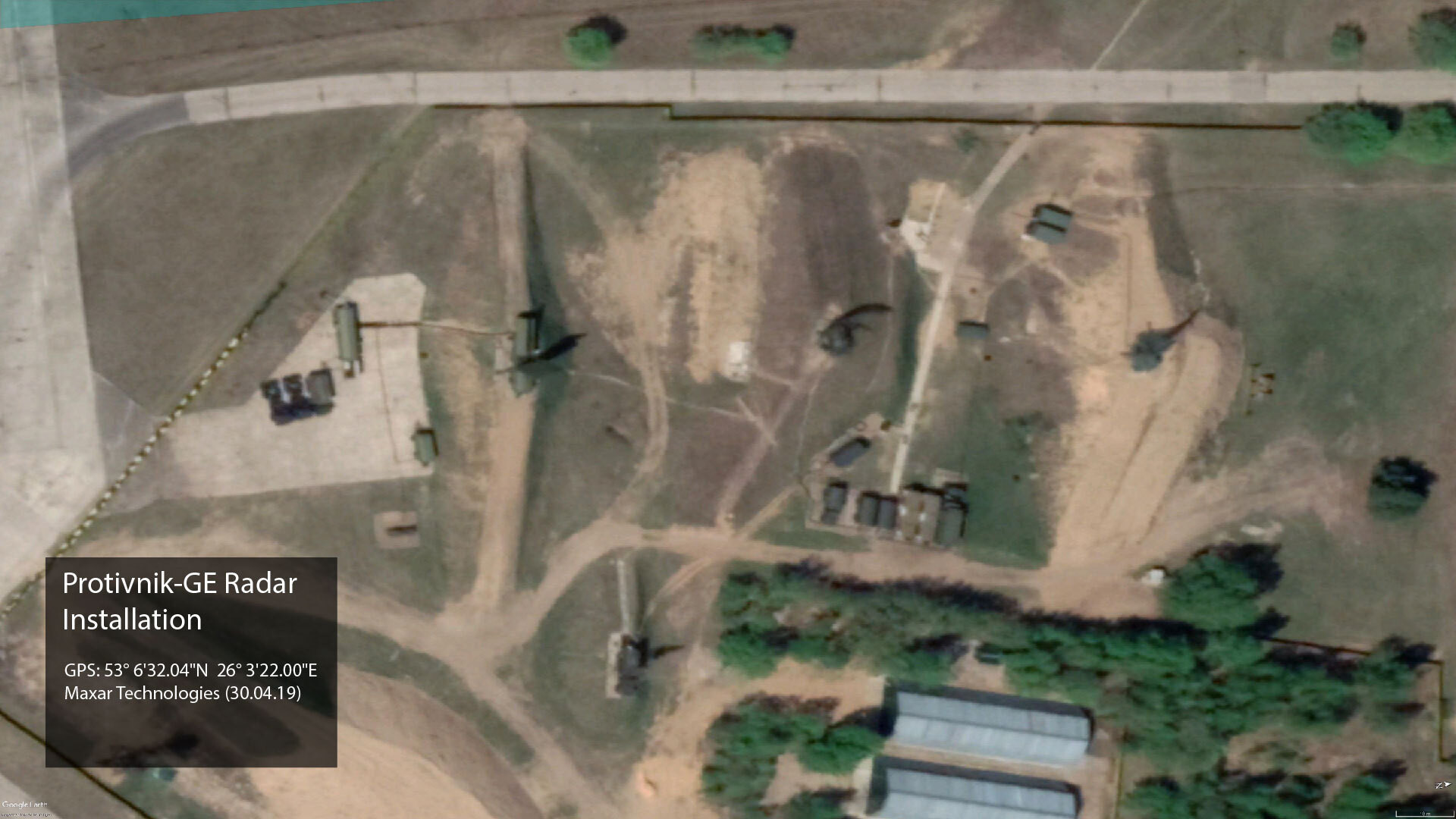 Vostok-D radar at Baranovichi AB, easily identifiable thanks to the crisp shadow A SAM storage facility is visible north of the airfield. On the apron adjacent to the facility, there is a Belarusian Buk-M3B3K air defence system (SA-17 Grizzly). We can identify the Buk’s Transporter Erector Launcher and Radar (TELAR) by its protruding radar. The Buk-M3B3K offers a maximum range and altitude of fire of 70km and 25km, respectively. 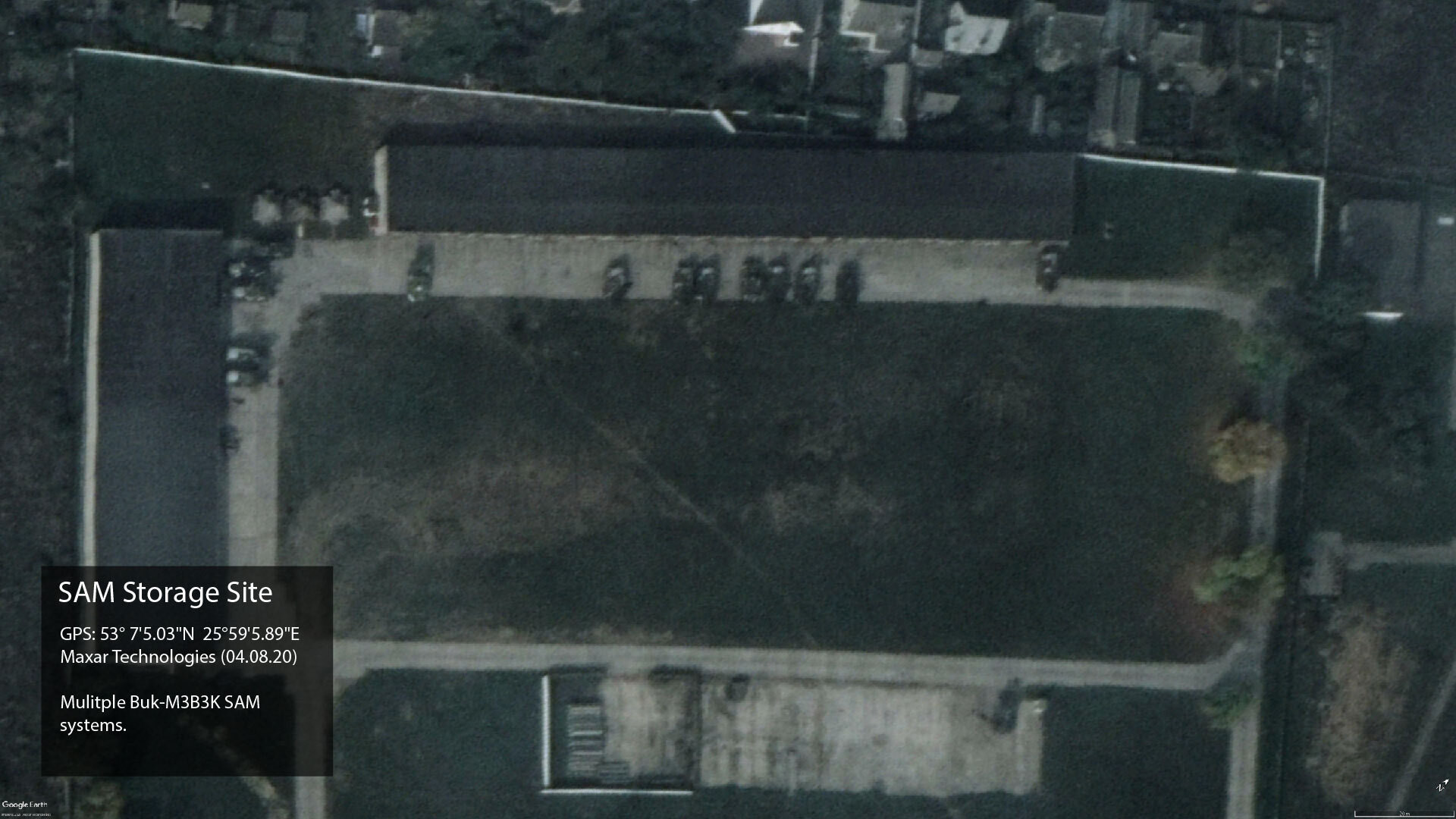 A Russian official has stated that Russia looks to strengthen Belarus’ SAM defence systems through upgrading the S-300 systems and supplying Belarus with one of the most advanced air defence systems in production, the S-400. Such a move will embolden defences against perceived NATO build-up and demonstrate increased defensive intentions.

If transferred successfully, the S-400 system is likely to be deployed near Baranovichi.

Belarus’ neutrality stated in its 1995 military doctrine has long but dissipated as its external security has become increasingly dependent on Russia and The Collective Security Treaty Organisation (CSTO). Belarus and Russia have integrated their air defence networks while the BAFADF trains in Russian Air Force training centers.

As Lukashenko’s regime further isolates itself from the rest of Europe, it has increasingly come into Russia’s fold. Political and domestic instability has put the nation in a similar position as Ukraine in 2014, yet Lukashenko’s grip on power remains. The 61st Fighter Air Base will become a shared strategic asset between Belarus and Russia, particularly as military cooperation intensifies.

Joint combat training between Belarus and Russia is of top priority to their bilateral security cooperation. In 2021, there has been a record number of joint military exercises. With this year’s Zapad exercise, a mainstay of the Russian-Belarussian defence partnership, already underway, Russian troops have begun arriving in Belarus.

Given the scale of these exercises and the exacerbated political context of the last four years, Russia may keep troops and aircraft permanently on Belarussian soil in an effort to provide a new front in the war with Ukraine and increase pressure on Europe.

Although analysts highlight these concerns frequently, the Kremlin realizes the precarious position Lukashenko finds himself in and may exploit Berlarus’ ongoing political instability to its advantage.

This assessment was made using Open-Source Intelligence (OSINT) techniques and resources. Visit Knowmad OSINT to learn more about our online OSINT training.

Update 25 August 2021 – re-assessment of radar dome and correctly identification as Sopka-2; correction of number of Su-30SMs fighters in Belarus’ inventory and delivery plan (thanks to Rochan Consulting for identifying and and helping us to solve the issues).

END_OF_DOCUMENT_TOKEN_TO_BE_REPLACED
Comments Off on Pride of Belarus: Baranovichi 61st Fighter Air Base [GEOINT]