The Bavar 373 solves two problems for Iran, one military and one of political nature. On the one hand, the Bavar will augment Iran’s small inventory of long-range SAMs, providing much needed coverage for the undefended sections of Iran’s airspace. Tehran hopes that the Bavar 373 will have a deterrent effect, raising the costs of foreign military attacks. On the other hand, the indigenous system renders Iran independent from foreign technology, a lesson that Tehran learned the hard away when Russia stalled the sale of the S-300PMU2 (NATO Reporting name SA-20B Gargoyle) from 2007 to 2011 due to US sanctions.

Bavar 373 Performance and Specifications (according to the Iranian Defense Ministry):

Contrary to critics, who have labelled the Bavar 373 an S-300 copycat, Tehran claims that the system is an original design. All officials speaking at the August 21 unveiling emphasized this fact and claimed that the Bavar 373 is superior to the S-300. While the Bavar 373 does indeed feature original elements and was produced by Iranian defence contractors, the system’s development would have been impossible without foreign technology. The Bavar 373’s dual-band sensor suite seems to be the system’s most valuable asset. The originality of the Bavar’s TEL and the claimed operational performance of the Sayyad-4 SAM are nevertheless disputable.

HOT VERTICAL LAUNCH/SQUARE CANISTERS. While the Bavar is widely believed to be a S-300PMU2-inspired design, the system’s rectangular launch tubes more closely resemble the M901 launcher unit of the Patriot Advanced Capability (PAC)-2 configuration. Like the Patriot, the Bavar 373 uses a hot launch technique instead of the cold ejection typical for Russian SAM launchers. 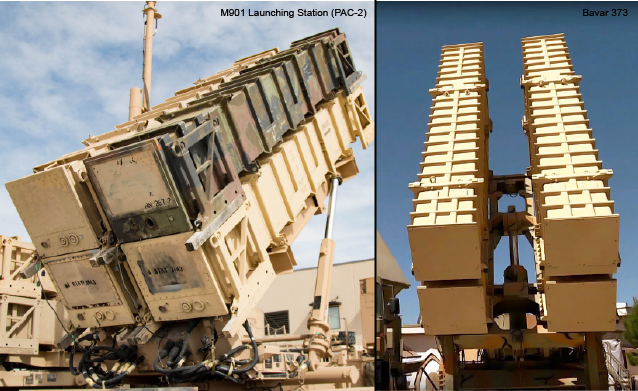 The S-300PMU2 uses gas to eject the SAM from a round cylinder, before the missile fires its thrusters. As the demonstration on August 21 showed, the Bavar’s Sayyad-4 powers its rocket engine inside the tube. The Bavar does, however, bear similarity with the S-300 when it comes to the full vertical launch position. In contrast, the American M901 fires from a 70 degree angle, a design feature copied by another Iran air defence system (Talash). 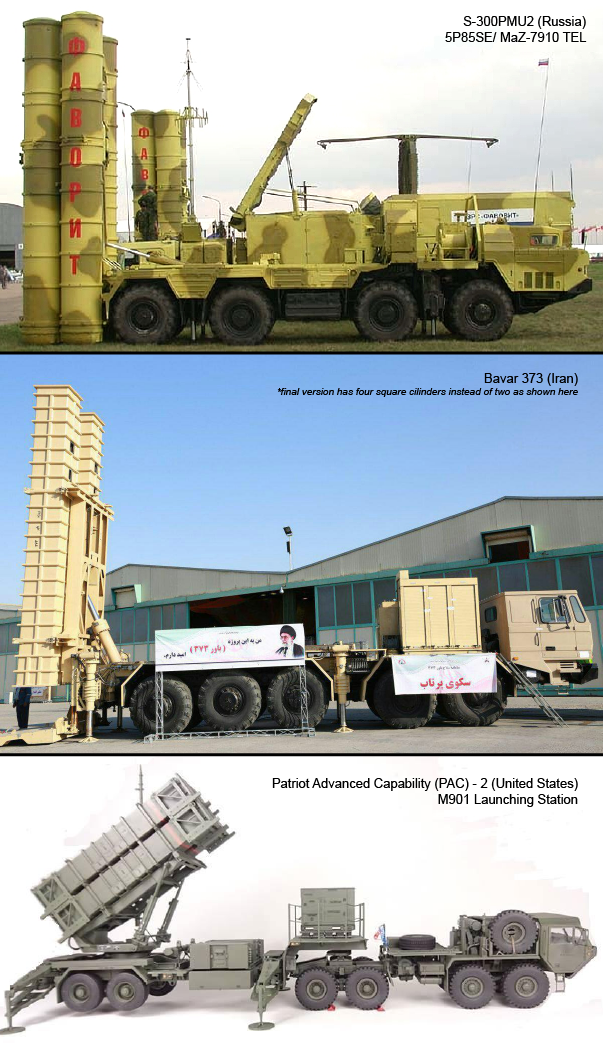 SENSOR SUITE. For the public demonstration, the Bavar 373 was augmented by two AESA radars, one engagement and one acquisition radar. This configuration is similar to the Russian S-300. The MIM-140 Patriot uses only one radar. Both of the Iranian radars are unique in their design and show little to no similarity with their American or Russian counterparts. it is possible that Iran’s decade-long effort to develop AESA radars has finally paid off. Due to the AESA’s frequency-agility and low-probability of intercept, the Bavar’s radars are – at least in theory – highly resilient to jamming and anti-radiation missiles.

The Iranian defense company Iran Electronics Industries has previously listed the Meraj-4 sensor as part of the Bavar 373. In the public demonstration of the Bavar, the Meraj-4 did however not feature. The Meraj-4 is a road-mobile S-band early warning 3D AESA radar. The manufacturer claims that is has a 400-500 km detection envelope, a 200 km tracking range, and a 360-degree azimuth. The Meraj-4 design shows undeniable resemblance to the Chinese-made JYL-1, a long-range S-band 3D air surveillance radar that has nearly identical specifications.  While the Meraj-4 was spotted as a road-mobile version, it is likely an element of Iran’s integrated air defence network rather than a permanent subsystem of the Bavar 373. 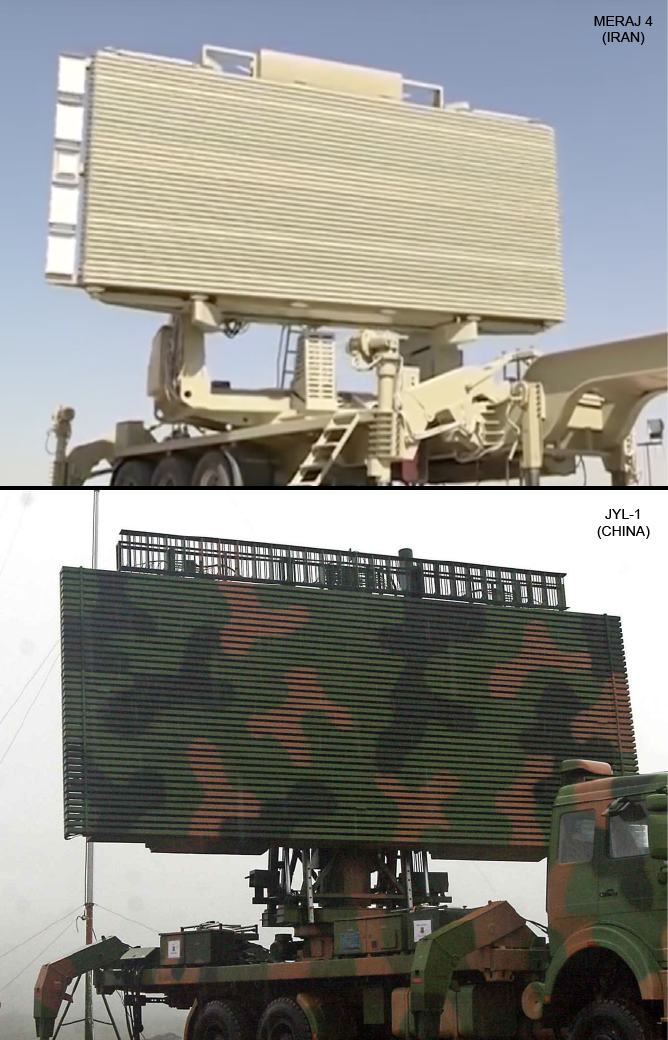 MULTI-MISSION. The Bavar’s diverse sensor and kinetic solutions will enable the Iranian air defence units to conduct both anti-aircraft and missile defence missions. The Sayyad-4, in particular, was developed to intercept large radar-cross section targets at the engagement envelope edge, e.g. ballistic missiles in lower endo-atmospheric space. However, doubts remain whether the Sayyad-4 has the manoeuvring capability to prosecute evasive ballistic missiles in their terminal phase. The Sayyad-4’s demonstrated thrust vectoring control is only used for initial trajectory alignment. 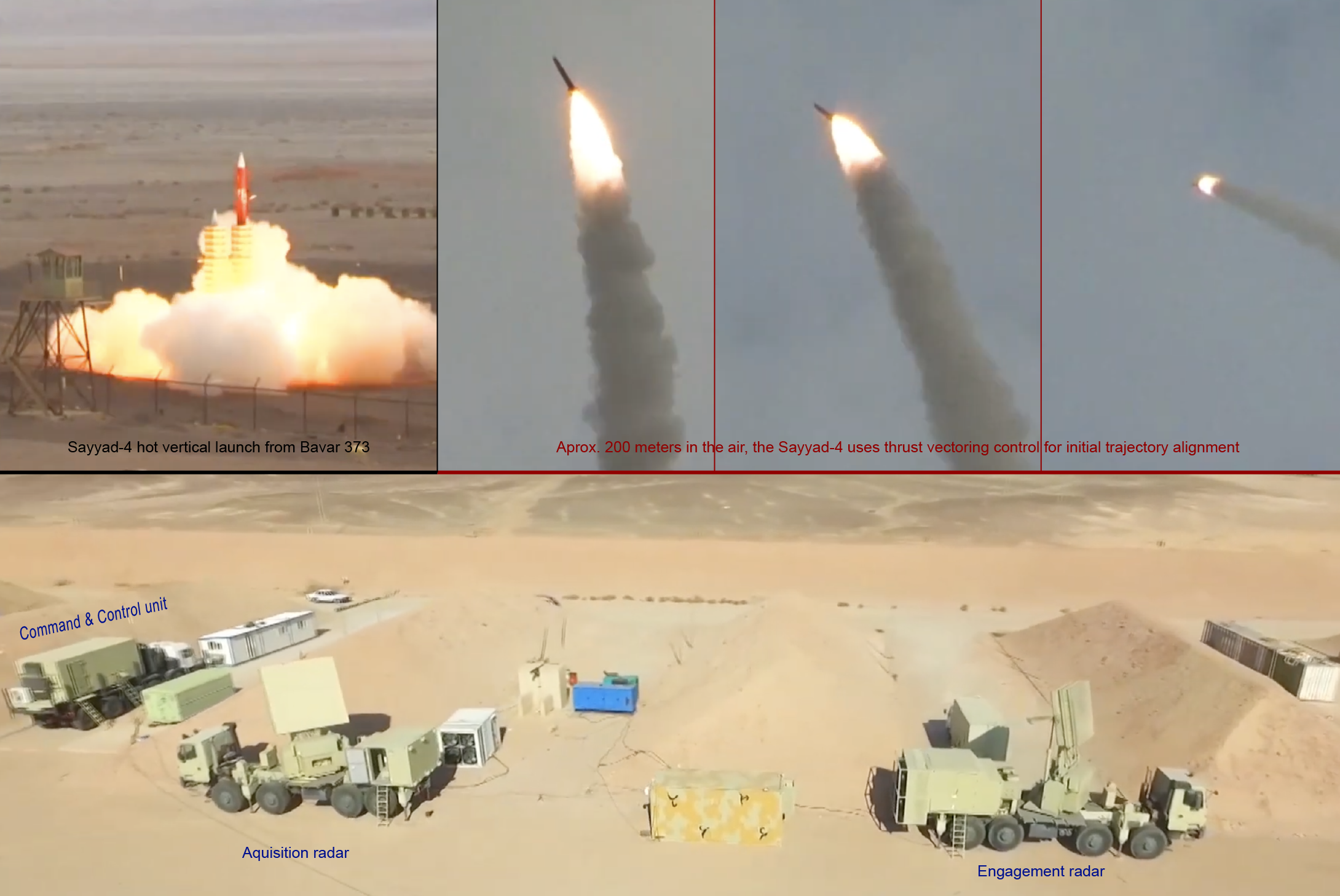 Iran’s Sayyad SAM series is based on the US-made Standard Missile 1 (RIM-66) naval SAM acquired by the Imperial Iranian Navy prior to the 1979 Revolution. However, the Sayyad-4 is double in size compared to its predecessor and bears resemblance with the Russian long-range Fakel 48N6E/E2 SAM. 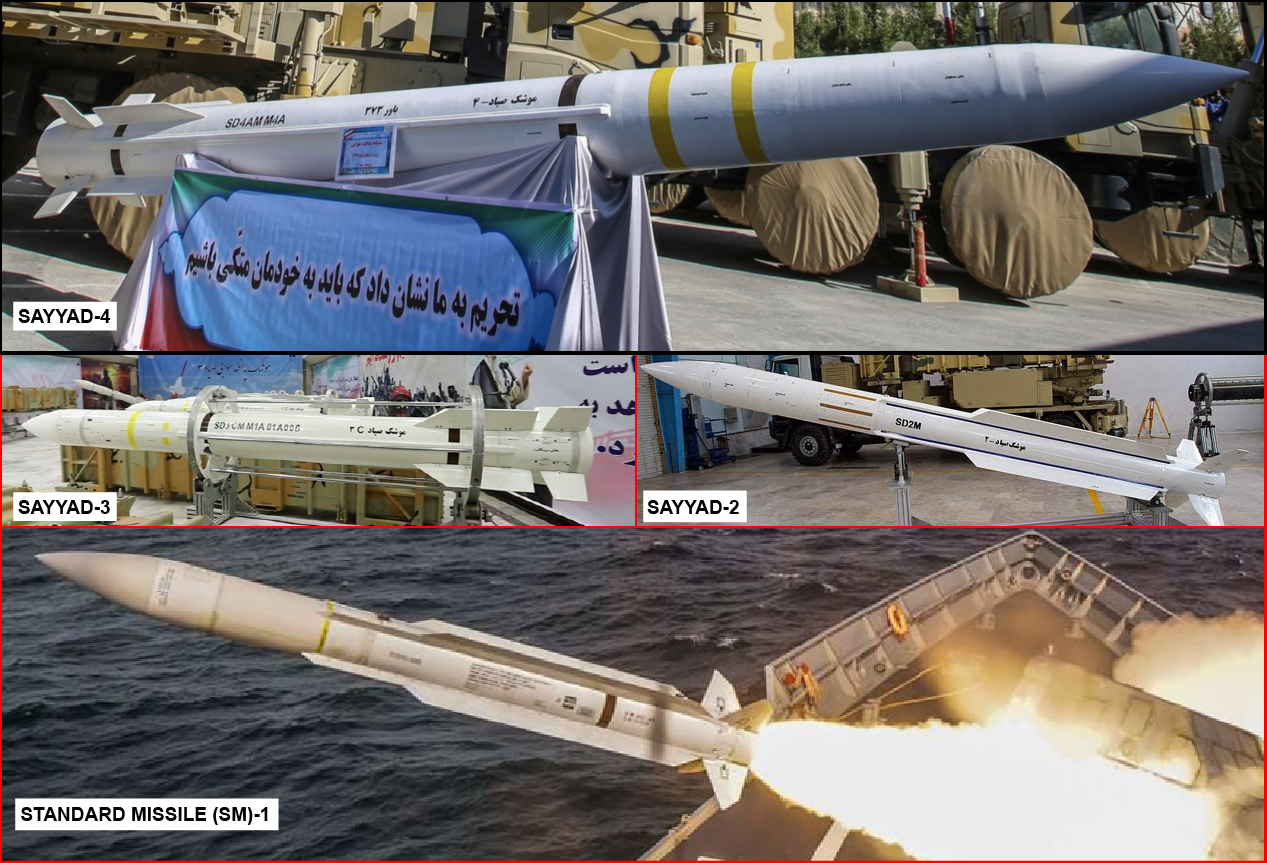 VALIDATION AND SUSTAINABILITY. The recent downing of a RQ-4 Global Hawk drone by the Iranian Khordad the 3rdSystem (similar to the Russian Buk-M2) has validated Iran’s research and development efforts in air defence technology. Building a dual-band long-range SAM system based on multiple foreign sources is nevertheless significantly more complex than replicating short- and mid-range legacy systems. The Bavar 373 still has to prove its performance in actual engagements and deployments.

Remote sensing operations using geospatial imagery will reveal in time how confident the Iranian Armed Forces are of the system’s performance. If the confidence level is high, the Bavar will likely be deployed as a solo long-range air defense asset for the poorly defended airspace in the east and south (protected by Khordad the 3rd or Talash mid-range SAMs for point air defence). If the system is deemed unreliable, it will likely supplement existing S-200 and S-300 deployments.

It took Iran more than 10 years of design flops, development limbo, and dire financial conditions to produce the Bavar 373. There is no information on how many systems exist and will be produced. It is also unknown whether Iran is even able to mass-produce the system and maintain it. As the country remains under though political and economic pressure from the international community, Tehran frequently exaggerates its military capabilities for foreign policy and deterrence reasons.

Iranian Space Launch Fails Again and the CIA Was Watching

Is Boeing's AI-Powered Drone the Loyal Wingman of Tomorrow? The Aussies Think So.