Russia’s secretive radioactive explosion is linked to the testing of a nuclear-powered unlimited-range cruise missile.

1. On August 8, 2019, around 9 AM local time, an explosion occurred on an offshore platform (vessel or berch) near Nyonoska (Russia), which killed seven people (two servicemen and five Rosatom personnel) and released radiation in the region. As the explosion was caused by an isotope-powered liquid fuel engine, it is virtually certain that a nuclear-powered missile, likely a cruise missile, was being tested or prepared for testing.

2. We believe that the missile in question is the 9M730 Burevestnik (NATO Reporting name: SSC-X-9 Skyfall). The SSC-X-9 is a nuclear-powered unlimited-range cruise missile that was announced by President Vladimir Putin as one of Russia’s six upcoming strategic weapons on March 1, 2018. 3. While a revolutionary concept, it is highly unlikely that the Russiann Ministry of Defence and the Russian defence industry possess the funds, technology, and know-how to successfully produce such a system. Given the engineering challenges and safety concerns, no other country has commissioned a kinetic solution with a nuclear-reactor on board. The United States was close to fielding such a design in the early 1960s. Known as Project Pluto, the United States developed a nuclear ramjet engine (Tory) to power a supersonic low-altitude missile (SLAM) capable of carrying multiple warheads. The project was canceled in 1964. However, as the SSC-X-9 was officially announced by President Putin, there is an enormous pressure on the Russian military to produce results.

4. As nuclear-powered cruise missiles require a liquid fuel booster to bring them to ramjet speed before enabling the reactor, there is a high likelihood of booster failure during the launch phase due to heat exchange and critical mass constraints. This is what likely happened on the morning of August 8, 2019.

5. According to sources in the U.S. Defence Intelligence Agency, only two of the 13 known SSC-X-9 tests were successful. A partially successfully test took place in Pankovo (Novaya Zemlya) in Russia’s far north island archipelago in November 2017. The test saw the missile flying for a few miles (rumors suggest 35 miles), before crashing into the sea. The SSC-X-9 likely failed to reach ramjet speed and crashed or self-destructed when going off course. Since then, the Russian military has abandoned the Novaya Zemlya testing ground and replicated the SSC-X-9 testing infrastructure in Nyonoksa. Another moderately successful test was conducted on January 29, 2019 in Kapustin Yar. 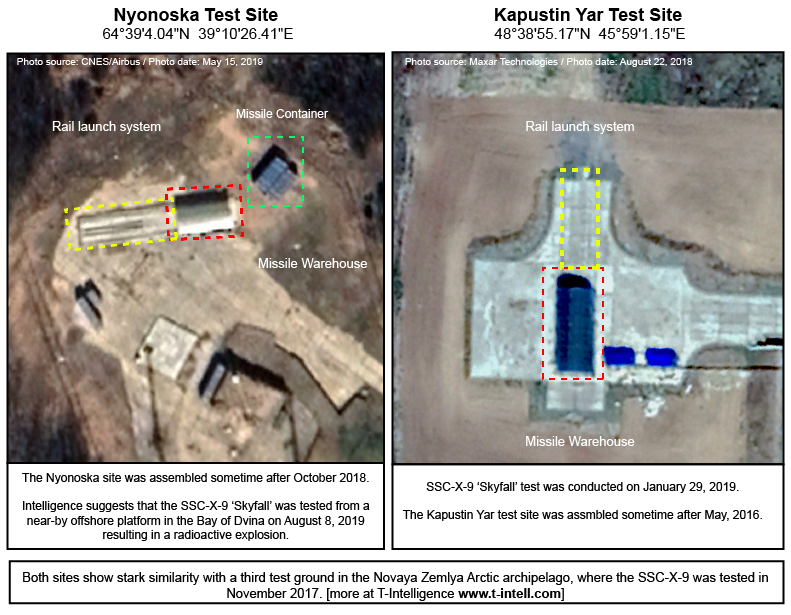 6. As accurately documented by Jeffrey Lewis and his team from the Middlebury Institute, the Nyonoksa Missile Test Center now hosts a testing pad that contains the same blue “environmental shelter” and launch rail system seen in Novaya Zemlya and Kapustin Yar, the two other locations that hosted SSC-X-9 launches. Operations security, and the objective of denying adversarial MASINT collection in particular, is likely the main reason why the Russians moved the SSC-X-9 testing further inland.

7. In addition to the identical ground test layout, there is another factor linking the recent explosion near Nyonoksa to the SSC-X-9 project. AIS data shows the presence of a Russian military tug in the White Sea during the August 8 incident. Further research identified the tug as the nuclear-fuel carrier SEREBRYANKA. This radiological service vessel was previously spotted off the Novaya Zemlya coast during the SSC-X-9 test of 2017. The SEREBRYANKA’s task is to collect submerged radioactive material from the sea.

GEOINT findings and analysis of the August 8 incident by T-Intelligence.

8. Days before the accident, the Russian authorities closed the area to maritime traffic and issued a notice to airmen (NOTAM), concerning a 27,000 square kilometer area between Nyonoksa and Novaya Zemlya. The distance from Nynoksa to the edge of the northern NOTAM area is 1,200 km (650 nautical miles). The NOTAM was in effect from 8 to 11 August, 2019. While NOTAM’s in the area are not a rare occurrence, many defence specialists have argued that the parameters of this airspace closure indicate the testing of a maneuvering missile (i.e. cruise missile) and not a ballistic missile. 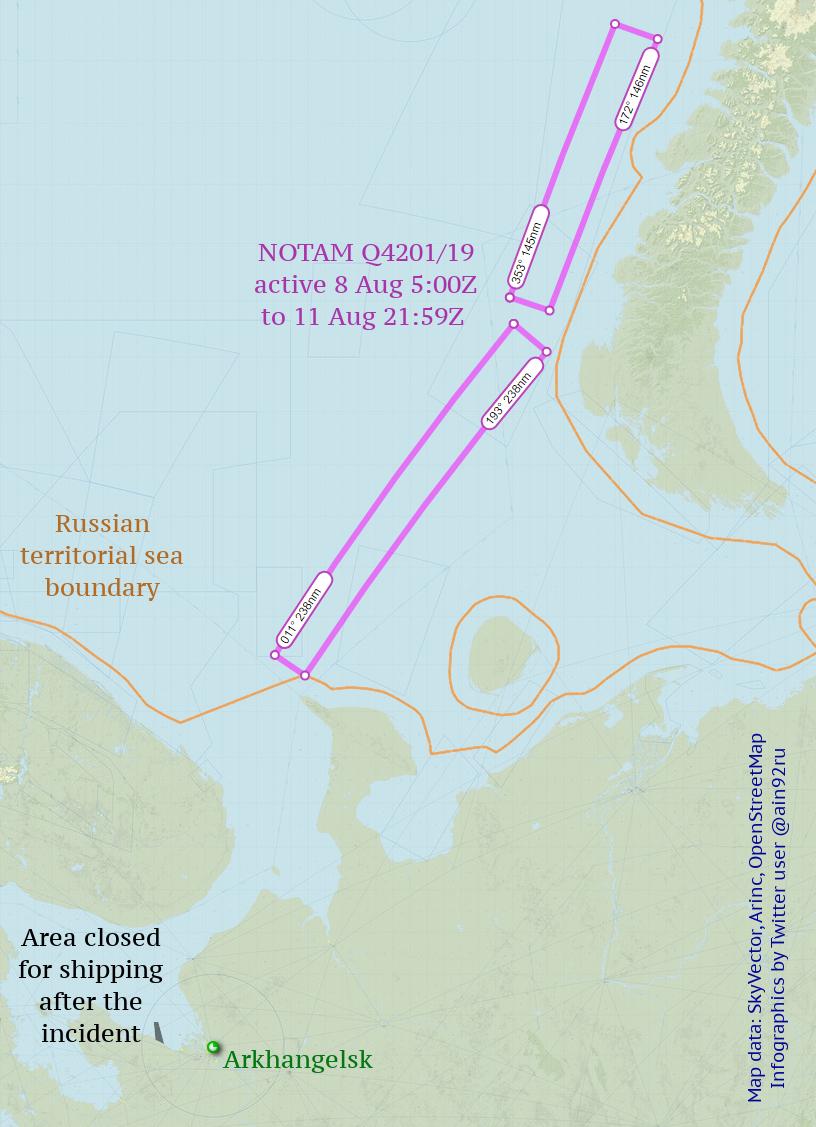 The NOTAMs and maritime traffic ban issued by Russian authorities in connection to the August 8 test and subsequent accident. (source: @ain92ru)

9. Why the Russians ultimately decided to test-fire the SSC-X-9 from an offshore platform, instead of using the purpose-built testing ground in Nyonoksa, is unknown. We believe that safety concerns were among the principle reasons. However, while human loss and infrastructure damage has been minimized, the accident likely polluted the White Sea with radioactive material. Following the explosion, Russian port authorities have issued a no-sail notice covering a 250 square kilometer area off the Nyonoksa coast. The ban on maritime traffic is in effect until September 10, 2019.

10. Severodvinsk, a city located just 45 km west of Nyonoska, registered a radiation spike of 2 µSv/h (microsievert per minute) between 11:50 AM and 12:30 PM local time on 8 August. This gamma radiation value is nearly 20 times higher than the normal value of 0,11 µSv/h. While such a radiation exposure is still considered safe for the population, inhabitants of Severodvinsk were quick to stock up on iodide tablets, creating a shortage in local pharmacies. The sensors in Severodvinsk reported a gradual decrease in radioactivity around 16:00 PM and a normalization shortly afterwards.

11. The 2 µSv/h value registered in Severodvinsk indicates that the radiation level around Nyonoska was double, if not higher. As Rashid Alimov from Russia’s Green Peace branch stated in the Barents Observer, the high radiation value means that beta and alpha radionuclides were released into the atmosphere.

12. Radionuclides are radioactive atoms such as uranium, radium and radon, which are particularly hazardous in drinking water. Radionuclide-contaminated drinking water can cause or facilitate life-threatening conditions such as cancer, kidney disease, liver disease, and impairments of the immune system. As radionuclides decay, they emit alpha, beta and gamma particles, which have further harmful effects on humans.

13. A number of photos that emerged on Twitter and Telegram show chemical, biological, radiological and nuclear (CRBN) defence units, suited in HAZMAT equipment, securing the accident site and evacuating the wounded. However, the Russian government and local authorities were quick to downplay the incident and claim that there was no danger for the population.

14. The latest setback is unlikely to halt the SSC-X-9 ‘Skyfall’. While the prospect of an all-reaching, non-stop cruise missile would render existing missile defence technology obsolete, there is no reason to expect the fielding of the SSC-X-9 in the next decade. However, continued work on the program will provide the Kremlin with valuable psychological operations material for both domestic and foreign audiences.

The ‘X’ in the missile’s NATO reporting name stands for ‘experimental’.

Is Boeing's AI-Powered Drone the Loyal Wingman of Tomorrow? The Aussies Think So.