HARM
Comments Off on Bizarre move in Deir Ezzor

INTELLIGENCE BRIEFING – The Department of Defense confirms that the United States have engaged ISIS targets around Deir Ezzor/ Dayr Az Zawr on 18th of Januariy 2017. Why this particular news should raise questions? Because Deir Ezzor has become the scene of a fierce battle between the local Syrian Arab Army (SAA) 137th and 57th Brigades and the terror group’s forces that have surrounded the city since early 2015. The 120,000 civilian still living in the city risk a humanitarian crisis. Therefore the United States have joined, even if for some isolated strikes, Russia in aiding the Regime’s forces. In other news, incoming POTUS, Donald J. Trump has been invited by Russia and Turkey to take part in the Astana peace talks on Syria.

Repeatedly, the Loyalist Coalition has neglected the ISIS threat and decided to focus on groups that also pose a legitimate political problem for Damascus, as the FSA. In turn, ISIS also avoided a brawl with the SAA as it focused to combat the Kurds and some Rebels. Recently, the SAA began paying the price for such an risky and somewhat irresponsible approach.

(1) Since 16th of January, the jihadists have deployed forces from northern Raqqa Governorate and Palmyra to lay a siege on Deir-Ezzor and capture the city.

(2) On 17th of January, social media chatter and crowd-sourcing have pointed out that ISIS has cut through SAA-held territory and isolated the local Airport from the city. Deir Ezzor is virtually a “red” enclave in the middle of an all “dark” territory, cutting the city from the only supply-line (the Airport) will have critical consequences. Whilst care packages can still be dropped without needing the aircraft to land, the risk of missing the drop-zone appears, especially in urban areas where the battle goes street by street, house to house.

(3) On 18th of January, the SAA has managed to successfully repeal attacks on the air base but not those targeting the city. Reports conclude that several neighborhoods have been breached by ISIS fighters. Air strikes by the US, Russian Air Force and Syrian Air Force; combined with SAA reinforcements inserted by helicopters have certainly benefited the resistance.

(4) On 19th of January, ISIS has begun sending reinforcements from the Al-Qa-im and the overall Anbar region of Iraq to Deir Ezzor, given the stiff resistance by the SAA. Local SAA-loyal guerilla groups, as the “Popular Resistance” front became active and launched attacks against ISIS, thus responding to the Army’s call of opening new front around Deir-Ezzor. 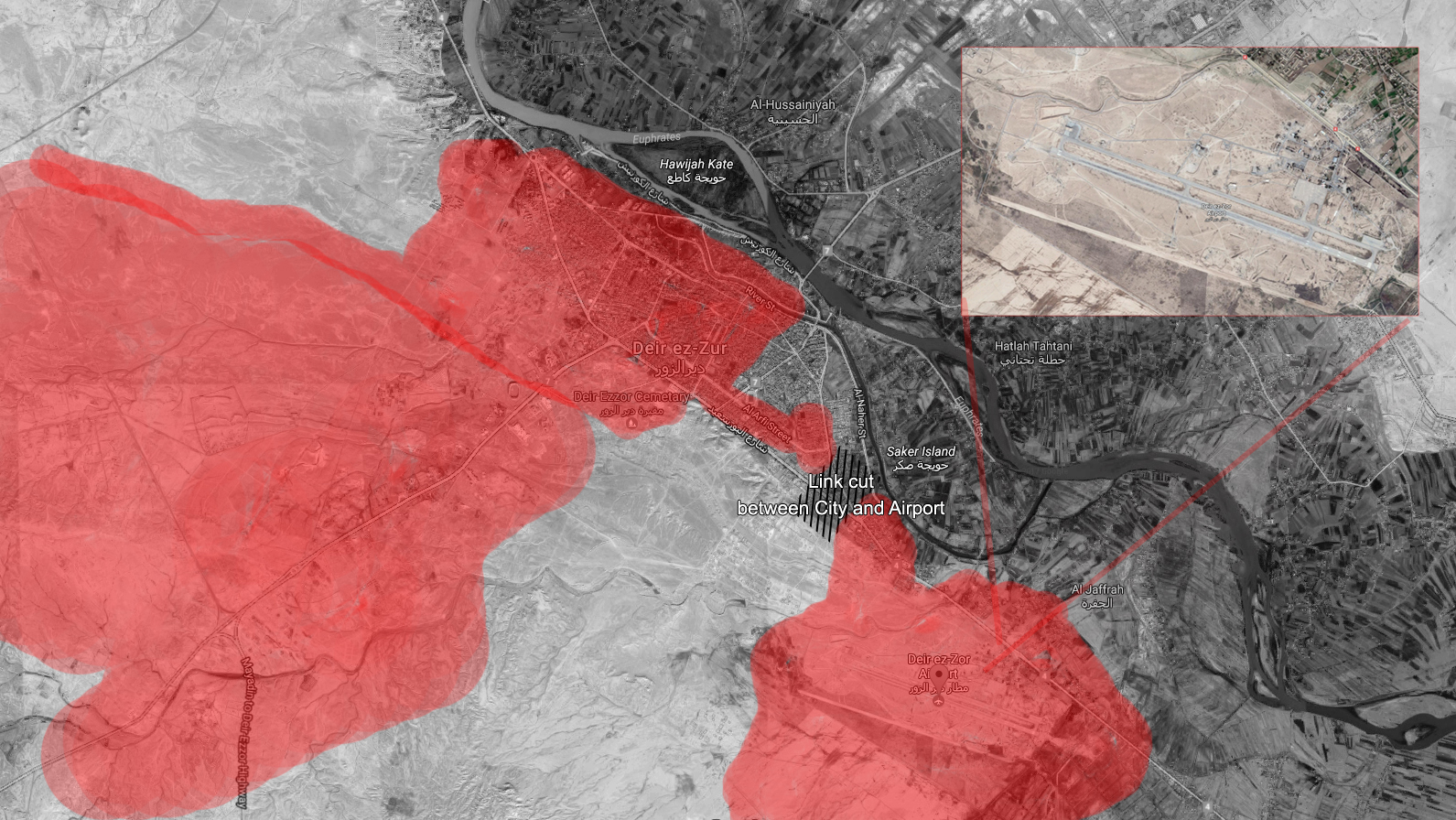 In Iraq, the Federal Forces, Popular Mobilization Units and Pashmerga are well in Mosul and are flushing the terrorists out. In Syria, YPG/SDF presence is at less than 40 km from the terror group’s self proclaimed capital of Raqqa. The group’s leadership could have decided to make a last fall-back plan in another city. A last fall back, from Mosul and Raqqa to the remote and isolated Deir Ezzor which would prolong the group’s existence.  Such a determination can be made by the rumors flouting that every jihadist participating in the offensive will be rewarded with a wife and a house in Deir Ezzor. Otherwise, what good would serve focus on assault a well guarded city, when YPG/SDF is assaulting Raqqa and the Iraqis are clearing Mosul?

Conclusion: If the working theory is proven right, than the Combined Joint Task Force – Operation “Inherent Resolve” led by the United States needs to make sure that Deir Ezzor does not fall into ISIS hands. If it does, the group’s existence will be prolonged, and the costly battles for Mosul and Raqqa will not bring the fight to end as thought.

*In Palmyra, ISIS has reduced its numbers after they allocated troops to be move in Raqqa, and (possibly) in Deir Ezzor. The SAA and its allies have taken advantage of this, and launched a new offensive on the historical site. The most disputed location is the T-4 Air base, held by Da’esh.

*The water crisis in Damascus has ended after a ceasefire between the SAA and the Rebels in Wadi Baradaa has been struck.

*Turkey has received help in Al-Bab but still no advancements. UK’s Royal Airforce, Russia and the US have hit targets in Al-Bab in support of the Turkish-Rebel ground pressure that has put ISIS under a 2-months siege.

*Battles led by YPG and SDF against ISIS in Raqqa Governorate continue.